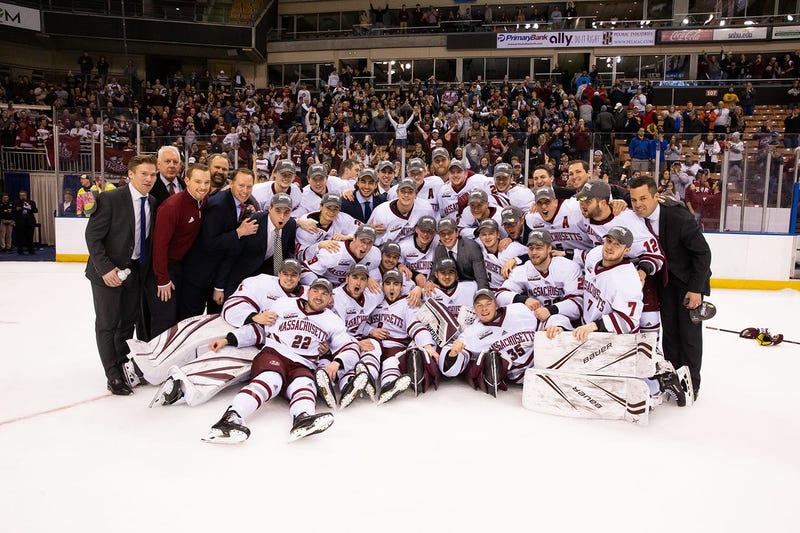 Going into this weekend, UMass looked like perhaps the most vulnerable of the four No. 1 seeds in the NCAA hockey tournament. The Hockey East regular-season champs were coming off arguably their worst game of the season, an uninspiring 3-0 loss to an under-.500 Boston College team in the Hockey East semifinals.

Now? The Minutemen look like the best team in the country and are heading to their first-ever Frozen Four after a pair of dominant wins over Harvard and Notre Dame in the Northeast Regional in Manchester.

Two other No. 1 seeds couldn’t even get out of the first round, as St. Cloud State and Minnesota State got knocked off by American International College (read more about that stunning upset here) and Providence, respectively. The fourth No. 1 seed, Minnesota-Duluth, needed a late tying goal and an overtime winner to get past Bowling Green.

Meanwhile, the Minutemen just took care of business. They put last Friday’s dud behind them and reminded everyone why they were one of the top-ranked teams in the country all season long, beating Notre Dame 4-0 in Saturday night’s regional final after cruising to an identical 4-0 win over Harvard the day before.

Saturday’s game had more in common with Friday’s than just the final score. UMass once again came out flying and controlled play for the vast majority of the first period, but couldn’t break through on the scoreboard thanks in part to some hot goaltending at the other end.

Then it looked like maybe the Fighting Irish -- like the Crimson on Friday -- were starting to find their legs and even up play a little. Then came the breakthrough, then a couple more goals, and then the door was slammed shut.

On Friday, UMass finally got on the board late in the second and then put the game away with two goals 1:47 apart before the midway point of the third.

On Saturday, the snowball got rolling a little earlier. On a power play with a little more than 12 minutes left in the second, the Minutemen got a fortuitous bounce when Mario Ferraro’s dump-in ricocheted off the linesman’s knee (ouch) and turned into a perfect cross-ice pass for Jake Gaudet, who walked into the right circle and beat Cale Morris five-hole on a shot the usually excellent Notre Dame goaltender would certainly want back.

Jake Gaudet takes advantage of a lucky bounce to give @UMassHockey the lead in the second.2nd Period | ND 0 | UMASS 1#NCAAHockey pic.twitter.com/8rl6VibWAx

UMass had to go on the penalty kill right after scoring, but what could’ve been an opening for the Irish just turned into more momentum for the Minutemen. They barely allowed Notre Dame in the zone, gave up no real chances, and then scored again shortly after the kill to make it 2-0.

The sequence started with one great play and ended with another. Hobey Baker favorite Cale Makar flew down the ice as the lead forechecker (it’s worth noting here that he’s a defenseman) and turned what should’ve been an easily playable puck for Morris into a chaotic scramble.

UMass came away with the puck and Brett Boeing (who had two goals on Friday) fired a shot from the top of the right circle that led to a juicy rebound for John Leonard. Instead of immediately turning the rebound back on net, Leonard realized he had time and space and showed remarkable patience waiting out Morris and making a nifty move before calmly flipping the puck over his left pad.

The Minutemen kept buzzing all around the Notre Dame zone, forcing the Irish to just pack all five skaters in deep and hope for the best, and drew a penalty just a couple minutes after the goal. They technically didn’t score on the power play, but they did just as it expired after an offensive zone faceoff win when Marc Del Gaizo faked a slapper from the point before setting up Makar for a rocket of a one-timer that beat Morris high blocker.

Just like Friday night, the Minutemen made sure their opponent never even sniffed a comeback. No let-up. No sitting back. No getting conservative. They continued to drive play, continued to hold the puck in the offensive zone, and made sure any looks Notre Dame got were few and far between. Eventually Oliver Chau tacked on an empty-netter. The final shots on goal tally read 34-13 UMass, bringing their count for the weekend to a ridiculous 70-30 advantage.

The Minutemen will now get ready for the Frozen Four in Buffalo, which begins a week from Thursday. They’ll face the winner of Saturday night’s West Regional final between Denver and Pioneer Valley brethren AIC. (Update: Denver beat AIC 3-0. Read more on that game below.)

One night after pulling off one of the biggest upsets in college hockey history, American International College's Cinderella run came to an end with a 3-0 loss to Denver in the West Regional final in Fargo, North Dakota.

That score doesn't really do AIC justice, as the Yellow Jackets once again never looked intimidated or overmatched, and they had a chance until the final minutes of the game.

Denver looked like it was starting to take control of the game as the first period went on, but the Yellow Jackets responded and registered seven of the first 10 shots on goal in the second. The game opened up a bit in the middle of the period, but both goalies made some big saves to keep it scoreless. The Pioneers finally broke through with 4:15 left in the second on a nice setup from Ryan Barrow to Colin Staub, who finished with a nice shot over the right arm of AIC goalie Zackarias Skog.

The Yellow Jackets kept the deficit at one for much of the third period, but struggled to create dangerous chances. They didn't allow a shot on goal for the first 16 minutes of the period, but they also managed just five themselves despite getting two power plays to work with. Then a turnover in their own zone essentially ended any hopes of tying the game, as Liam Finlay pounced on the mistake and made it 2-0 with 3:30 to go. Jarid Lukosevicius added an empty-netter a couple minutes later.

Despite the loss Saturday night, AIC obviously has a lot to be proud of. The Yellow Jackets won their first Atlantic Hockey regular-season title and first Atlantic Hockey tournament title, made the NCAA tournament for the first time, and cemented their place in college hockey lore with an upset for the ages against St. Cloud State on Friday night.

The game’s decisive moment came 7:53 into the third when Minnesota State’s Connor Mackey was given a five-minute major and game misconduct for a hit to the head. The Friars made them pay with two goals on the ensuing power play, first from Tyce Thompson and then from Josh Wilkins (his second goal of the game), to take a 5-3 lead before sealing it with an empty-netter.

Make it 5 unanswered for @FriarsHockey!Josh Wilkins scores his second power play goal of the game to put Providence up by a pair.3rd Period | PC 5 | MSU 3#NCAAHockey pic.twitter.com/4DdOoVGXAW

Providence will face Cornell in the regional final Sunday at 4 p.m. on ESPN2. The Big Red cruised to a 5-1 win over Northeastern on Saturday, building a 4-0 lead by the 13-minute mark of the second and limiting the Huskies to 21 shots on goal.