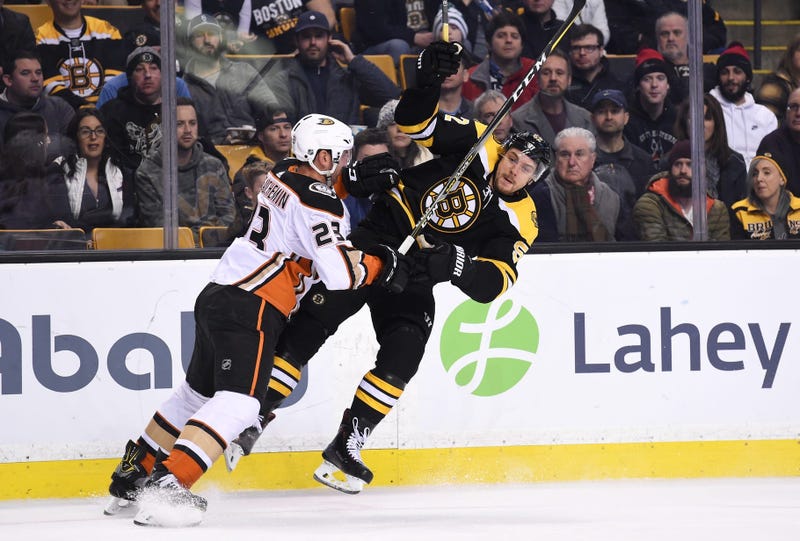 Unfortunately for the Bruins, battered and bruised in just their first game out of the All-Star break, one streak had to die for the other to live.

On the wrong side of a 3-1 final against the Ducks at TD Garden on Tuesday, it was with the loss that the Bruins saw their 18-game point streak come to an end, while their winless streak in head-to-heads against Anaheim reached a whopping eight games.

It was the loss that you could see coming from a mile away, too.

Back from the aforementioned break and working through its rust, down Brad Marchand (this was the second game of his five-game ban), and with Anton Khudobin in net over the straight-up lights out Tuukka Rask, the optics alone made it a scheduled loss.

Then Bruins hit the ice for what had to be their worst-looking first period of the year.

Surrendering the first goal for the eighth game in a row, this time when Khudobin whiffed on a puck, which then slid in off Zdeno Chara and in, the Bruins found themselves down two when Adam Henrique struck on the power-play less than five minutes later.

By the period’s end, the B’s had just five shots -- and with only two from their forwards (David Backes and Tim Schaller each had one) -- compared to 15 from the Ducks. This went beyond just shots, though, as the Bruins were routinely beat to loose pucks, looked tired and timid, and were simply outplayed in every possible facet for 20 minutes.

“We just didn’t have it early,” Bruins coach Bruce Cassidy said. “I don’t know if it’s credit to them, or just our guys, or the break, whatever the case was, wasn’t good enough.”

It looked even worse with the utter failure of an early power-play opportunity, too.

“If you’re ever going to get a power play, where I think it’s tough is early in the game. I think the killers are always fresh, you’re not really into the game. I think those are statistically early in periods are tougher, I’ve found over the years,” said Cassidy. “But, to not generate anything was disappointing. It was kind of like the rest of our first period: not ready, not executing, not fast, they jumped us, and not winning pucks.

The Bruins found their stride in the final 40, of course, and were even given a chance when the injured John Gibson departed for backup Ryan Miller with seven minutes left in the third period. But with the clock working against them, even when Ryan Spooner broke through for the B’s with 40 seconds left in the third, it was too little, too late.

“A lot of good chances, a lot of good looks,” Patrice Bergeron acknowledged after the loss. “If you bury a few of those, it’s probably a different game and we feel better, more confident. That being said, I think it was a tough start and a good way to come back. Like I said, you have to learn that you have to play 60 minutes in this league.”

The Bruins also have to learn that they’re no longer going to sneak up on teams.

What you saw Tuesday was a hungry Anaheim squad realize the challenge in front of them (the Bruins are now obviously considered one of the top teams in the league, and a get-up opponent), and just pop the B’s in the mouth. And the Bruins, a team accustomed to playing the underdog role and full of youngsters still learning how to play in this league let alone win, struggled to find ways to adjust to it with tangible results.

“I thought they did a good job of coming out and punching us in the mouth, metaphorically speaking,” Bruins d-man Torey Krug said following the defeat. “There were times that it seemed like they were hitting us and we weren’t hitting back and we got to focus on ourselves and make sure that we’re using our legs.”

But the Ducks also actually punched the B’s in the face, too, with game-ending injuries to both Anders Bjork in the first period and David Backes in the third period. The Bjork incident seemed rather harmless at first glance, with the first-year pro lightly cross-checked by the Ducks’ Francois Beauchemin and down the tunnel favoring what appeared to be a shoulder, while the Backes hit seemed to have a bit more malice, with the veteran winger leveled high and late by Anaheim’s Nick Ritchie.

And it was after the Backes incident that the Bruins seemed to have enough, with Zdeno Chara blatantly trying to level Adam Henrique at center ice, and then getting into a highly heated exchanged with Ryan Getzlaf after a Getzlaf chop to the black of the legs. An incident that would have been a lot worse had it not been for the referees saving Getzlaf from an irate Chara.

“Nobody wants to see your teammate being carried off the ice,” Chara said. “Again, that’s something that officials have to, or the league has to make another look at it.”

It goes without saying that not every night will feature a B's player targeted physically, but 'targeting' as a whole is now something that the Bruins, established as a legitimate threat in the Eastern Conference and with a near every-other-day schedule of games from now ‘til April’s conclusion of the regular season, will have to find ways to see coming.