Good news for all of those looking to keep track of each pitch and at-bat of the Red Sox' 30 Grapefruit League games: Every single one of them will be on WEEI 93.7 FM or WEEI 850 AM radio.

When you tune in, however, many of the games won't be delivering the usual nine innings.

Due to the new COVID-19 protocols, many of the exhibition games will be cut short. Sunday, Alex Cora explained the situation:

"We can play five, we can play seven before March 13, we’re playing a nine-inning game against the Rays right away because it’s a national TV game. National TV games, you have to play nine. You have to cover the three hours at least for sponsors. But we will play seven-inning games. We’re not playing five, we’re covered as far as the pitching. Now you don’t need backups. If the inning’s getting out of hand, you can stop it right there. I think it’s 20, maybe with us it’s going to be 25 but we like it. I do like it. I think seven innings is good for everybody, including the position players, so that’s where we’re going to go. I think the second part of spring training, we’ll play it depending on obviously where we’re at pitching wise, but probably when we start playing nine innings.

“Actually, Cashy (Rays manager Kevin Cash) called me the other day and he wants to play 15. Lucky him, he’s got all those horses over there. But we’ll talk about it, but I think everybody … you make the decisions the day before, you have to call the league by 5 o’clock, you get together, you make a few phone calls and you get together with the opposition, but from our standpoint, five doesn’t make any sense. I think everybody needs to, and I’m not managing the other team, but I think you still have to get the guys ready, too. The guys who aren’t going to make the teams, right? Because you never know when you’re going to need him. You never know when they’re going to start playing, so it’s a balancing act and I think seven for us is what we’re trying to shoot for. Obviously we will talk to the opposition before and we’ll make it work."

The Red Sox kick off their spring training schedule Sunday when they take on the Twins at Hammond Stadium. 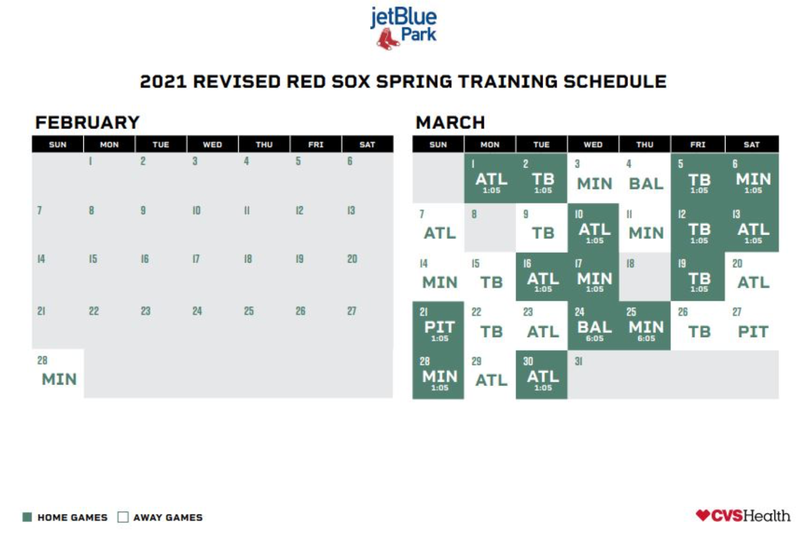