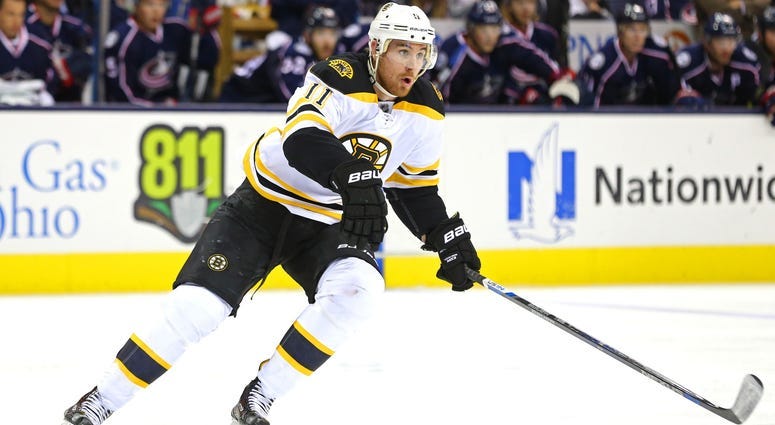 Off the Bruins’ active books thanks to a buyout that became official when not a single one of the other 30 NHL teams were willing to claim him off waivers over the weekend, it should be said that things were not always this bad for Jimmy Hayes. Not to the point where his name was sullied beyond repair and where people in his hometown were relieved to hear he’d be paid to not play for his childhood team, anyways.

Though it feels so far removed from your brain that you legitimately wonder if it ever happened, the Dorchester native ended the first three months of his first year with the Black and Gold with eight goals and 18 points in 34 games. It was a pace that would’ve allowed him to finish his first year in Boston with 19 goals and 43 points.

That pace would have allowed the B’s to claim a draw on a deal that sent Reilly Smith -- he scored 25 goals, 50 points, and wore an ‘A’ that year -- to the Panthers for Hayes.

But when the calendar shifted to 2016, Hayes’ game straight-up plummeted into an abyss that the 27-year-old Hayes never found his way out of.

The 6-foot-5 Hayes closed out his season with just five goals and 11 points in the final 41 games of his season, including just two goals in his final 31 games of the season. Both his goals and points per game pace were sliced in half as a result of those struggles, and Hayes ended his first season in Boston with just 29 points.

It somehow got worse this past season, too, as Hayes tallied just two goals and five points in 58 regular-season contests. Only three NHL skaters played in as many games and had fewer points (forwards Vern Fiddler and Chris Thorburn, and defenseman Mark Borowiecki) and the only 15 players to score fewer goals were defensemen.

The B’s goaltending tandem, with two assists from Tuukka Rask and a single helper from Anton Khudobin, were two points away from matching Hayes’ production.

This was a daily nightmare for Hayes.

“When he stopped scoring, I think Jimmy’s game, he felt a lot of pressure and whether or not the environment or his own human nature kind of played a part of it,” Bruins general manager Don Sweeney, whose trade-and-sign for No. 11 was one of his first moves as the B’s GM back in 2015, said when asked why Hayes couldn’t work here.

“Last year was a tough year for him, certainly,” Sweeney continued. “I think the game has gotten faster and I think it’s caught up to him a bit in that regard. He’s done a lot of work on and off the ice and he’s a great teammate, first and foremost. I want to thank him for putting forth the effort that he did. It just didn’t seem to work for him last year.”

But the decision to walk away from screamed mercy from a B’s front office that didn’t want to simply bury the player. As either a player or as a person, for that matter.

Rather than burying him in the AHL for the final year of his contract, which would have freed up just over $1 million in cap space -- which was something the Bruins were not afraid to do with former botched additions, such as Peter Schaefer and Matt Irwin -- the Bruins instead opted for a quick-fix featuring an extra $300,000 or so of wiggle room with their cap space this season. It was also a more ‘human’ way of doing business in the sense that it also allows Hayes to try and find work while teams are still dealing with question marks with their organizational depth. (Hayes remains unsigned.)

“We may have had a secondary window that we could have done this later on,” said Sweeney. “I felt that this was the time to allow Jimmy to explore as best he could what other opportunity would present itself at this point rather than some point in August.”

It’s the second year in a row in which the Bruins bought out the remaining years of a contract (they did this with Dennis Seidenberg last summer and in the same buyout window), but what makes this one different from the Seidenberg decision, which was made because the Bruins thought that years of hard minutes and multiple surgeries cooked his career, is that the B’s viewed Hayes as a roadblock to their youth movement.

“We felt that there were some players that would be in front of Jimmy,” Sweeney said.

Which was the case for entirely too many days of Hayes’ forgettable tenure in Boston.