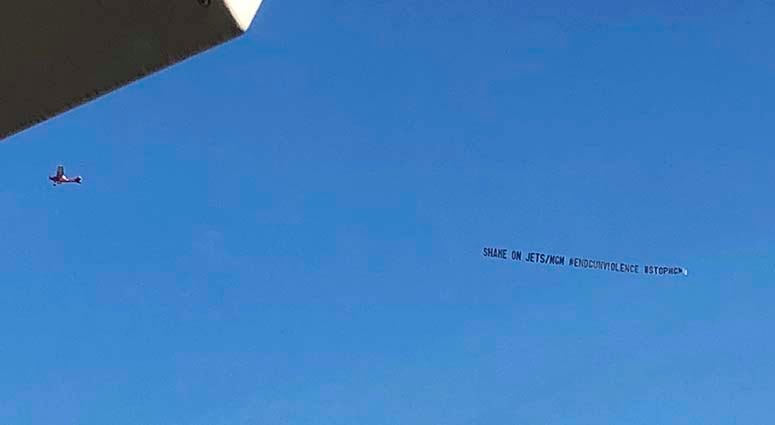 The Jets and Las Vegas-based MGM announced two weeks ago they agreed on a multiyear deal that is the first of its kind in the NFL. MGM Resorts is now the official gaming partner of the Jets. The agreement is the most comprehensive and integrated gaming partnership in the league, and the first to go beyond a casino sponsorship.

"We wholeheartedly agree that our country needs to put an end to gun violence," MGM Resorts International said in a statement to The Associated Press.

In July, MGM sued more than 1,900 victims of the deadliest mass shooting in modern U.S. history in a bid not for money, but to avoid liability for the gunfire that rained down from a lone gunman at its Mandalay Bay casino-resort in October 2017.

Early last month, a panel of federal judges denied a request from MGM to centralize 13 lawsuits stemming from the shooting. MGM had asked to centralize the cases after it filed nine lawsuits in various states against the over 1,900 victims, but said it respected the ruling by the Judicial Panel on Multidistrict Litigation and would litigate its motions in the courts where the actions were pending.

MGM said at the time that its lawsuits are to avoid years of costly litigation and were focused only on people who have sued the company and voluntarily dismissed their claims or have threatened to sue.

Late last month, MGM and the plaintiff's attorneys agreed to stay all pending litigation and entered into mediation. All litigation was suspended while the sides attempt to mediate a settlement.

"Our goal has always been to resolve these matters fairly and promptly, and we and the plaintiffs have asked the courts to suspend all litigation so we can enter into mediation and attempt to reach a resolution," MGM said in a statement to the AP. "We hope for a positive outcome so all of those impacted can look forward to the future and continue in their healing."

A few New York-area politicians had recently slammed the Jets' partnership on social media, citing the initial lawsuit by MGM.

New York State Sen. Kevin Parker from Brooklyn wrote on Twitter: "I strongly disagree with @nyjets partnering with @MGMResortsIntl. The @MGMResortsIntl decision to sue the victims of the Mandalay Bay Shooting in Las Vegas is a complete disgrace! The @nyjets SHOULD NOT move forward #STOPMGM."

Added N.Y. State Sen. Luis Sepulveda from the Bronx: "Shame on the @nyjets for partnering with @MGMResortsIntl who decided to sue the victims of the Mandalay Bay Shooting in Las Vegas. I urge folks to boycott the team until they end the partnership. #StopMGM."