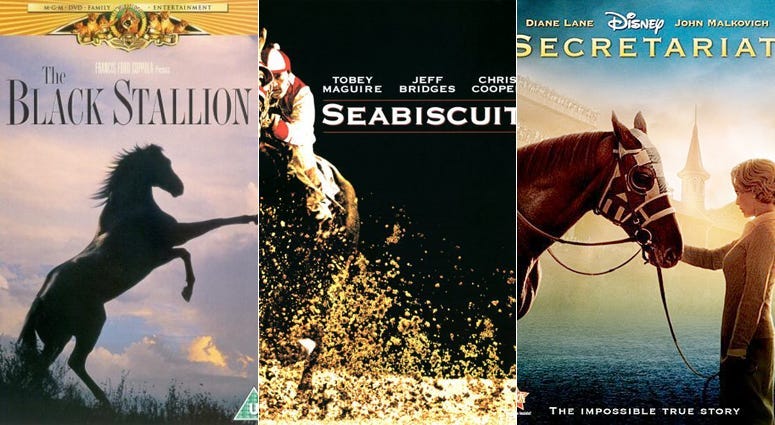 In honor of the Belmont Stakes, here’s a roundup of nine movies based on horse racing themes spanning 80 years of the sport. Many favorites and classics are based on true-life stories, and all are recommended viewing for horse lovers.

'A Day at the Races' (1937)If you can get a hold of this classic, watch it. The Marx Brothers' humor is pure gold in this Oscar-nominated black-and-white comedy starring Groucho, Harpo and Chico, along with Maureen O'Sullivan and others. In it, a veterinarian posing as a doctor and a racehorse owner struggle to help keep a sanitarium open with the help of a misfit racehorse.

'International Velvet' (1978)A sequel of sorts for the young Elizabeth Taylor's starring role in "National Velvet"in 1944, "International Velvet" is a coming-of-age drama around equestrian competition starring Tatum O'Neal and Nanette Newman as an orphaned girl and her English aunt. Anthony Hopkins plays the trainer, as the girl develops into a talented rider who could have a shot at getting into the Olympics.

'The Black Stallion' (1979)Beautifully shot, "The Black Stallion" won the Special Achievement Academy Award and the National Society of Film Critics Award for Best Cinematography. The late, great film critic Roger Ebert wrote: "The first hour of this movie belongs among the great filmgoing experiences. It is described as an epic, and earns the description."

'Champions' (1984)Bob Champion MBE (portrayed by John Hurt) is a British steeplechase jockey who successfully battled cancer and managed to win the 1981 Grand National riding Aldaniti, a horse who appears in the British-made film directed by John Irvin. In 1984, John Irvin was nominated for a Golden Bear Award at the 34th Berlin International Film Festival, and the following year, John Hurt won at the Evening Standard British Film Awards.

'Seabiscuit' (2003)Based on the bestselling nonfiction book "Seabiscuit: An American Legend" by Laura Hillenbrand, this film is a biopic re-make of "The Story of Seabiscuit" (1949). The champion horse was an undersized thoroughbred, knobby-kneed, and an unlikely hero who nonetheless won races and Americans' hearts during the Great Depression. Universal Pictures crafted the rags-to-riches story in 2003 by focusing on the jockey Red Pollard (Tobey Maguire), the owner Charles S. Howard (Jeff Bridges) and the trainer Tom Smith (Chris Cooper).

'The Derby Stallion' (2005)Another coming-of-age movie centers on a 15-year-old, this time a boy, played by Zac Efron. Based on a story about an unlikely friendship between the boy and a retired steeplechase jockey, this film features a horse named Rusty and creates some fairly predictable tear-jerker scenes while preteen audiences root for the underdog.

'Dreamer' (2005)The lead cast is Kurt Russell, Kris Kristofferson, Elisabeth Shue and Dakota Fanning in this DreamWorks Pictures film that earned a Critics' Choice Award nomination for Best Family Film. The plot line is inspired by the true story of an injured thoroughbred racehorse named Mariah's Storm (called Soñador in the movie) and some action at the Breeders' Cup Classic.

'Secretariat' (2010)Secretariat won the Triple Crown in 1973, shattering racetrack records in all three legs of the event -- records that still stand today. It had been the first time horse racing saw a Triple Crown winner in 25 years. This is the compelling, true story of "America's superhorse" and a young owner (played by Diane Lane) and her trainer (John Malkovich) overcoming the odds.

'50 to 1' (2014)The true story of Mine That Bird, an undersized, crooked-footed thoroughbred who ran the 2009 Kentucky Derby from way behind and won by seven lengths despite the odds. A group of Mexican misfits were given no chance, but their unlikely success leaves the audience with a dream-big message.