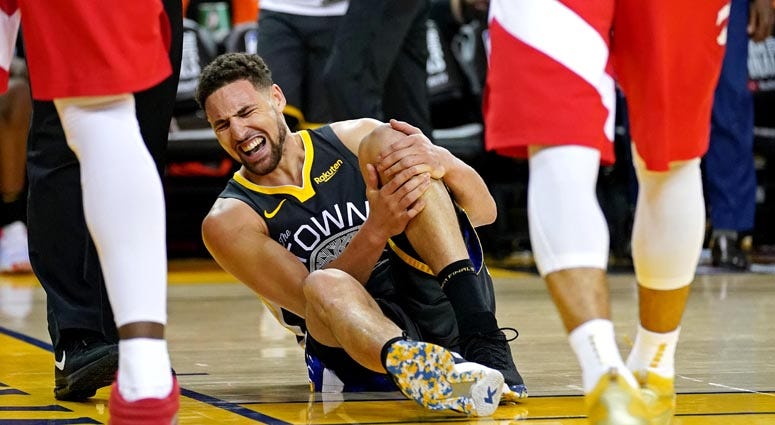 The Raptors are world champs, but will devastating injuries to Warriors stars Kevin Durant and Klay Thompson hang over Toronto's title?

The Raptors beat Golden State 114-110 on Thursday night to win the NBA Finals in six games. Three nights after losing Durant, who only played 12 minutes the entire series, to a ruptured Achilles tendon, Thompson, who was already dealing with a hamstring issue,  suffered a torn ACL.

"I'm not going to sit here and take anything away from them (the Raptors), but I would've liked to have seen them beat the Warriors with Durant and Thompson both playing healthy seven games, and obviously neither one of them did that," Esiason said on the "Boomer and Gio" show.

"Yeah, people are going to point to, because it's a fact -- it's not an excuse, but it's a fact -- that this Warriors team wasn't whole," Giannotti said. "Now, that doesn't mean what Kawhi Leonard and the Raptors did was any less spectacular, but it is part of the story. We're never going to know if Kevin Durant and Klay Thompson were healthy for the entire series, how this series would've gone. But let's not take away the fact that they (the Raptors) went into Oracle and won all three games there, and that is not easy to do."

Boomer and Gio agreed that Leonard, the Finals MVP, cemented his legacy in the playoffs. In 24 postseason games, he averaged 30.5, 9.1 rebounds and 3.9 assists. The former San Antonio Spur became just the third player in NBA history to win NBA Finals MVPs with two different teams, Kareem Abdul Jabbar and LeBron James being the others.

"Warms up to Toronto, focuses in and goes and wins a championship for that city, the first one ever, and does it with one of the most remarkable postseasons we have seen from an individual," Giannotti said. "I mean, it is up there as one of the great all-time postseasons."

"I do want to celebrate Kawhi Leonard because after everything that he went through last year (an injury and trade from San Antonio), for him to play the way that he played and get the Finals MVP is pretty special," Esiason said.

Now the big question is whether Leonard will return to Toronto next season.

"Here's Kawhi Leonard, the toast of the town, the man, the Finals MVP, and he's going to opt out of his contract to be an unrestricted free agent, and he might leave!" Giannotti said. "This guy, one of the biggest heroes in Canadian sports now ... and he might leave!"

"I just can't imagine him leaving Toronto now," Esiason said. "They could pay him the most money. I know he's beloved there."

To listen to the open from Friday's show, click on the audio player above.