By Boomer and Gio 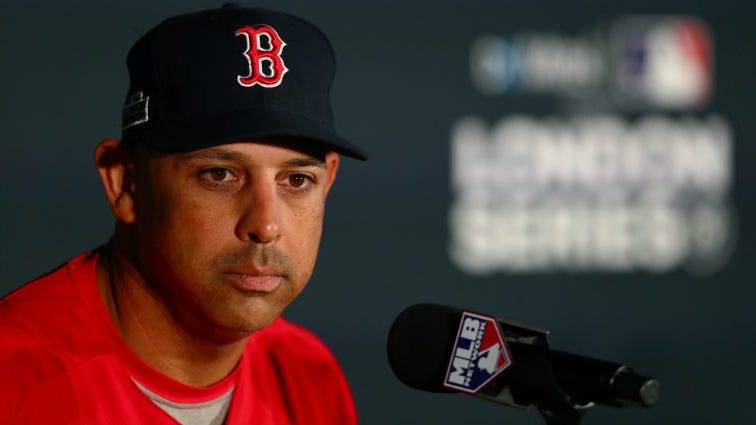 But is new Mets manager Carlos Beltran's job safe? That was a topic WFAN's Boomer Esiason and Gregg Giannotti discussed during their show Tuesday.

Beltran, a member of the 2017 world champion Astros, was the only player from that team named in Major League Baseball's nine-page report Monday on the sign-stealing investigation.

"Approximately two months into the 2017 season, a group of players, including Carlos Beltran, discussed that the team could improve on decoding opposing teams' signs and communicating the signs to the batter," the report said.

The Athletic reported in November that Beltran played a key role in devising the sign-stealing system, although MLB's report did not indicate that he was any more involved than other players. Moments after MLB suspended Hinch and Luhnow for one year, Astros owner Jim Crane announced he fired both. The team was also fined $5 million and stripped of its first- and second-round draft picks in 2020 and 2021.

The sign-stealing scheme consisted of positioning a camera in center field at Minute Maid Park to zero in on catchers' signs, which were then relayed to batters by having players, who were monitoring the video feed on a computer, bang on a trash can in the tunnel near the team's dugout.

Cora, who was the Astros' bench coach in 2017, was the only non-player who was directly involved in the scheme, according to the MLB report. The 2018 Red Sox, who won the World Series under Cora, are now the subject of a separate investigation into sign-stealing allegations involving use of their video replay room.
Rich Schultz/Getty Images

"His partner in crime down in Houston was Carlos Beltran," Esiason said on the "Boomer and Gio" show. "They're the ones who put this whole thing together, and the Mets have now hired a manager that is stained with this whole thing. And I don't care what anybody says, this is what happens when you have a rookie general manager hiring an ex-player that's basically never been a manager before and you don't do your due diligence, and now he's got this stain all over him as well."

But is that stain damaging enough for the Mets to cut ties with Beltran before he's even managed a game for the team?

"The thing that sucks for the Mets is not only the PR they got to deal with, but now they're in a situation where Major League Baseball didn't deal with Carlos Beltran," Giannotti said. "Now it's up to them to deal with it if they choose to or not. And their two choices are, one, they're going to keep him as the manager and they've got to deal with the nonsense the entire year or, two, they've got to fire the guy that they just put in charge of their organization, who was a good Met for them, who they're excited about."

Just after being hired by the Mets in November, Beltran denied knowing about the use of a camera, saying the Astros only used legal methods to decode signs.

But Gio said it didn't seem fair for Beltran to be the only player from the 2017 Astros to lose his job over the cheating.

"What's interesting here and what makes Carlos Beltran different is he's the only player named," Giannotti said. "So now if you are to believe that the Mets have to fire him because he's involved with this, then you also have to believe that the other players that were directly involved in this, we need to seek them out, and punishment has to be for them, too. But if it's just Carlos Beltran, because he's now a manager of a different team, that we have to see him punished and he was a player just like those other guys, why do they get to get away with it scot-free and be able to play and make all their money and then Carlos Beltran has to get fired? Just because he got a managerial job?"

"Yeah, I think so," Esiason responded.

To listen to the open from Tuesday's "Boomer and Gio" show, in which the guys also discuss LSU's national championship win over Clemson and Joe Burrow's future, click on the audio player above.