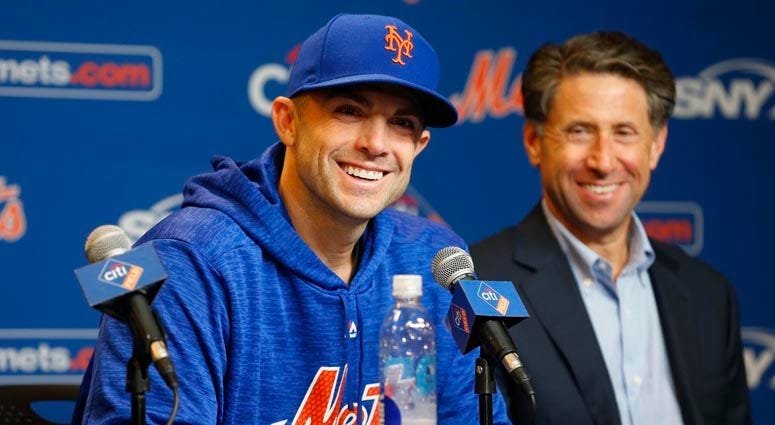 On Saturday, David Wright will take the field wearing the New York Mets uniform for the final time.

While his career may not have ended how he, or any Mets fan, would have wanted it to, there is no doubt that Wright will go down as one of the all-time Mets.

He would make his first All-Star appearance in 2006 in a season in which the third baseman hit .311 with 26 home runs and 116 RBI. It was a special season for the Mets, as New York came just a couple of outs short from making the World Series, falling to the St. Louis Cardinals in Game 7 of the NLCS.

The captain sat down for a conversation with WFAN's Ed Coleman to discuss coming just short in 2006, the magical World Series run in 2015, his final comeback and everything in between.

"That was a fun, fun, fun team," Wright said about the 2006 NL East Champion Mets squad. "We could beat you with pitching, we could beat you with the back end of our bullpen, and the most fun part was beating you by scoring 15 runs. Thankfully I was in the middle of that, and I'd have Jose [Reyes> and Paul Lo Duca setting the table. And then behind you, you had [Carlos> Beltran and [Carlos> Delgado, some of these guys behind you where you're going to see good pitches to hit.

"It was fun coming to the ballpark knowing that every night, you had a chance to put up a bunch of crooked numbers in that game. A lot of the time I was the benficiary of that, having Jose get on first, steal second, probably steal third and then get a cheap RBI. That was a fun, athletic, offensive team to be a part of, for sure."

While the 2006 season provided Wright and Mets fans with some great memories, the same cannot be said about 2007.

New York held a seven-game lead over the Philadelphia Phillies on September 12 before suffering a historic collapse, losing 12 of their last 17 games and missing the playoffs on the last day of the regular season.

In a career filled with plenty of highs, Wright let it be known just how rough that 2007 collapse was.

There is no denying that Wright has always been a fan-favorite.

He was named captain of the Mets in 2013, just the fourth captian in team history, and it was obvious that he took that responsibility to heart.

Part of the reason he was so popular was his brutal honesty. Unlike some stars in professional sports today, Wright was never afraid to face the media following a tough loss or bad performance. He held himself accountable, which is not always an easy thing to do in New York City.

"I think that was part of the veterans- when I got called up, the way that they kind of raised me was that good or bad, be accountable," Wright told Coleman about facing the media after a rough day at the stadium. "It's not that difficult to go up there and say that you stunk that day. It's going to happen. It's baseball. I've always felt not a responsibility but it was just the right thing to do, that if you go through a rough day or the team has a rough loss, answer the tough questions. It's going to be tough. No one wants to lose. No one wants to talk about losing. But it's part of the process and it's part of playing in New York. I learned that at a very young age. Try to be as genuine as possible.

"I think that's part of the reason that I have, or like to think that I have, the relationship with the fans that I do. I come from a blue-collar family. I like to think I still have that blue-collar mindset, just like my parents, just like the Mets fans. I'll tell you when I stink, because there have been plenty of times that I've stunk. I'll be the first to admit it. For me, that was part of the responsibility of being one of those core players, that sometimes there's some heat to deal with. The spectrum here is great. When you're winning, walking around the city, you're floating around the city. But when you stink, and the team stinks, you're going to be under a microscope and there are going to be a lot of questions you have to answer. If you're willing to accept all of the perks that come along with winning, you better be able to accept the criticism when things aren't going well."

As he prepares for the last few days of his playing career, Wright wasn't always sure that he would even make it to this final moment at Citi Field.

Things looked bleak after he was diagnosed with spinal stenosis in 2015. He was originally placed on the disabled list because of a hamstring injury in the middle of April, but later that summer received the unfortunate diagnosis.

On August 24, over four months after being placed on the DL, Wright made his return to the majors. In his first at-bat, he blasted a home run to the second deck of Citizens Bank Park, which served as a bit of a spark plug for the 2015 Mets.

"Yeah that was pretty sweet," Wright said about that first home run after returning to the majors. "My back has just really, really given me problems over the years. It continues to give me problems, along with the laundry list of other things these days, but my back was kind of the first thing that really, you know, was debilitating for me. You work real hard to get yourself a slight chance that I can grind through this. I got to that point and I stunk in the minor leagues for that rehab assignment. I mean I don't know if I hit an extra base hit. I was hitting probably very similar to what I was just hitting in the minor leagues. Probably hitting close to .100 with no extra base hits. And I was like, 'Man I don't know about this.'

"My rehab assignment was running out and they said, 'We'd like to have you in Philly.' I was like, 'Yeah let's do it.' So I get there and I hit it, and it was just kind of a weight lifted off my shoulders... All eyes kind of shifted off of me and was more on the team again. It was a great feeling because we could just play team baseball. We went on some kind of roll, and as I mentioned before, without a doubt the most fun I've ever had on a baseball field."

Of course, Wright is referring to the team's magical run to the World Series in 2015.

After beating the Los Angeles Dodgers in five games in the NLDS, New York was set to take on a talented Chicago Cubs team with a trip to the World Series on the line.

But Wright and the Mets left little doubt on who deserved to be the National League's representataive in the World Series, completing a four-game sweep of the Cubs in easy fashion.

The feeling of joy he felt after winning Game 4 is not one Wright plans on forgetting about any time soon.

While the team has struggled to reach the playoffs since that run, with the 2016 Wild Card Game appearance being the lone exception, Wright doesn't think the current Mets team is that far from once again reaching the coveted postseason.

"Although we've had a couple rough seasons, I think you could certainly takes some positives from this second half, in particular this last maybe month or two," the 35-year-old third baseman said. "When you have [Jacob> deGrom, [Noah> Syndergaard, [Steven> Matz, [Jason> Vargas has pitched well as of late... I would tell you there's probably, I don't know, 27, 28 GMs out there that would sign up for that right now, to start a team with those guys. Jake- I've never seen anything like it. I've played with, you know, Pedro [Martinez> and [Tom> Glavine, Hall of Famers. R.A. Dickey when he won the Cy Young, and this is just- no offense to those guys- this is a different level. This is video game-type stuff.

"When you can start with that, I feel like you're at a pretty good advantage. It's just a matter of filling some holes here and there and keeping them healthy. You've got to keep these horses healthy. They've been really fun to watch, and I've got a different perspective now too, kind of in the dugout and being around them more than I would have if I was preparing and playing. To get to know them on a personal level and know what kind of makes them go and click and their routines, talking hitters with them and baseball, gives me a greater appreciation for just how great this pitching staff can be."

With his playing career coming to an end, there is no doubt that this weekend will be emotional for Wright and Mets fans alike.

The captain will put on the Mets jersey for the final time Saturday, where he will start at third base alongside his longtime teammate and close friend Jose Reyes.

"It's been tough to put it into words," Wright said about his final weekend wearing the Mets uniform. "You feel like you're accomplishing a goal, but you're not really accomplishing a goal because I can't physically play. So for the Mets to be as gracious as they have been, to allow me to hopefully get a couple pinch-hits and get a couple of innings at third on Saturday has really meant the world to me. It's always been my goal- what started out as a short-term goal now has turned into a long-term goal- of putting this uniform back on. So to be able to button the uniform up again and to go out there and do something you love...

"I've never taken the field with the goal of 'Ok I'm going to have fun today,' but that's going to be my goal on Saturday. Just to have fun. The expectations are low for me. I want to have fun. I want to try to soak it in as much as possible. I want to show my appreciation, while at the same time hopefully bottling up some of these memories that will stick with me for the rest of my life."

Emotions will certainly be flowing at Citi Field on Saturday. No matter what actually happens on the field, Wright will be flooded with cheers and love from the Mets faithful.

While Mets fans will get the opportunity to show their appreciation towards the captain, Wright wants fans to know the feeling is completely mutual.

"I don't think 'thank you' cuts it to the fans and the organization and anybody that has ever had anything to do with helping me along the way. I truly mean it. If I could say 'thank you' a million times, I would because I really mean it."

First pitch for Saturday's contest against the Miami Marlins is set for 7:10PM.