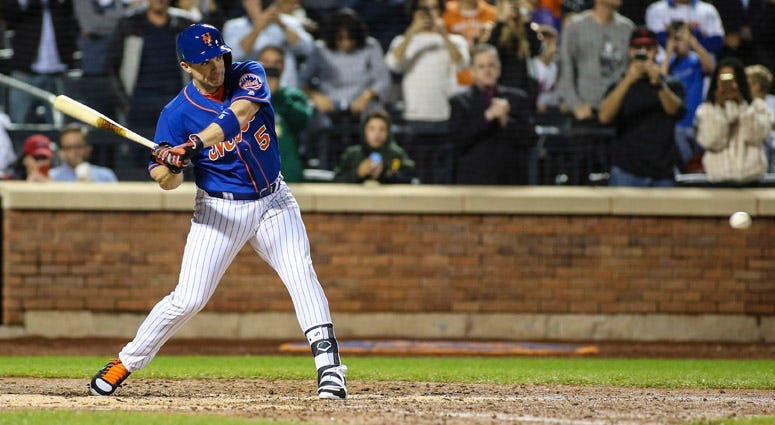 David Wright finally made it back into a major league game Friday night, grounding out in his first plate appearance for the Mets in nearly 2½ years as New York lost 8-1 to the Miami Marlins.

Sidelined by neck, back and shoulder injuries since May 27, 2016, the 35-year-old Wright pinch-hit leading off the fifth inning and received a warm ovation from the Citi Field crowd. With fans on their feet, his family in the stands and teammates draped over the dugout railing, Wright swung at the first pitch he saw - a 96 mph fastball from Jose Urena.

The seven-time All-Star hit a bouncer to the left of third baseman Brian Anderson, who made a nifty pickup of a short hop and threw across the diamond to retire Wright. The Mets' captain gave a quick wave to the crowd and touched the bill of his helmet before returning to the dugout, where he high-fived and hugged teammates with a huge smile on his face.

"It really was amazing," Wright said. "I really felt butterflies that I've never felt before."

MORE: David Wright To Mets Fans: 'I Don't Think "Thank You" Cuts It'

Wright is scheduled to start at third base Saturday night against the last-place Marlins in his goodbye game before a sellout crowd. Unable to overcome all the injuries, he said he expects this weekend to mark his final appearance in the big leagues.

Wright was on deck when the last out was made in the fourth, causing the crowd to boo loudly when the inning ended. He clutched his bat and paced the dugout for most of the next half-inning before bounding onto the field even before the Marlins took their positions with a 3-1 lead in the fifth.

Once one of the top players in baseball, Wright was reinstated from the disabled list Tuesday but didn't play in New York's three-game series against NL East champion Atlanta this week. With the Braves trying to earn home-field advantage in the Division Series, the Mets did not want to compromise the integrity of the pennant race.

Wright made his major league debut for the Mets in 2004, three years after they drafted him 38th overall. He is the longest-tenured active player to spend his entire career with one team.

Wright homered in each of his last three games in 2016 before needing season-ending neck surgery, one of several medical procedures he has undergone since then.

He is the franchise leader in hits, RBIs, runs, doubles, total bases, extra-base hits and walks. His 242 home runs trail only Darryl Strawberry (252) on the Mets' career list. Wright also hit the first World Series home run at Citi Field, connecting in a Game 3 victory against Kansas City in 2015.

Urena (9-12) won his sixth straight decision, holding the Mets to one run over six innings despite walking four.

Magneuris Sierra knotted the score at 1 with a run-scoring grounder in the fourth. Peter O'Brien and Lewis Brinson each doubled home a run in the fifth against reliever Paul Sewald (0-7).

The Marlins added four in the seventh.

CAPTAIN IN THE CAGE

The Citi Field gates will open at 4:30 p.m. on Saturday so fans can watch Wright and the Mets take batting practice.

Mets: OF Juan Lagares (torn left big toe plantar plate) is expected to be at full strength for the start of spring training. ... Right-handers Robert Gsellman and Seth Lugo have been shut down for the rest of the season. "We feel that this is taking care of them heading into the offseason so they can come back and be even better next year," Callaway said.

Marlins: RHP Trevor Richards (4-9, 4.66 ERA) looks to build upon his best start in the majors. The rookie blanked Cincinnati for seven innings on Sunday, striking out nine.