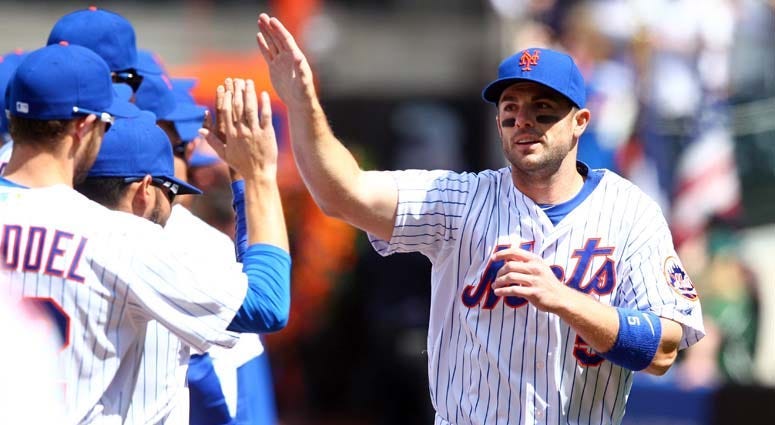 Few of us will ever breathe the rich air of stardom. We won't ever know what it's like to have our likeness lathered against a teen's wall or have gaggles of fans ask for our autograph or cash a million-dollar check.

We also won't have our decaying mind and body betray us before millions of viewers, to hear the collective gasp of those who worshiped us while we fade from our former, physical eminence. Think of Joe Louis getting (literally) knocked out of the ring by Rocky Marciano. Remember Mickey Mantle, his legs bandaged from heel to hip, wince while he whiffs on another fastball. Recall Willie Mays, stumbling and then tumbling to the outfield grass at Shea Stadium while chasing the fly ball he snared with ease 10 years earlier.

Maybe David Wright isn't quite that kind of icon, but he was a bona fide star in the Big Apple, the Mets' answer to Derek Jeter. A seven-time All-Star, Wright lived the holy trinity of celebrity -- class, cash and cachet.  But unlike the aforementioned stars who played until age and gravity grounded them, Wright suffered the indignity of injury before his baseball golden years. Instead of watching him strike out on a pedestrian slider or let that grounder squirt between his legs, Wright's plight has played out in medical reports, his life dictated by doctors.

It doesn't feel like 15 years since Wright and Jose Reyes were the twin faces of the Mets' future, the left side of their infield locked down for at least a decade. Reyes had his time, then left, leaving his slice of the spotlight to Wright. Both were fine, if not fantastic, ballplayers. But, for various reasons, it never felt as if the duo lived up to our epic expectations.

But unlike Reyes, who left a toxic taste in local mouths by fleeing Gotham for Florida in 2011, Wright stayed, got paid and was the team captain, batting .306 and .307 in the two years after his gifted friend left Flushing.

With quantum leaps in training and nutrition, pro athletes are performing deep into their 30s, yet Wright was robbed of his. You need a medical degree to grasp the vast swath of Wright's mangled limbs, faulty joints and broken bones. Wright endured a tender hamstring, suffered a stress fracture in his lower back and toiled in the daily agony of spinal stenosis. Even his injuries spawned more injuries. Indeed, Wright's bum shoulder was the residue from a surgery to fix a herniated disc in his neck.

Even his rehab stint in the minors has been a struggle. In a few games for high-A St Lucie a year ago, Wright had one hit and struck out five times in 10 at-bats. Overall, he has "just 15 uninspiring minor-league games under his belt the the last two years" according to piece from CBSSports.com.

Wright didn't reach the watermarks for Hall of Fame consideration. He won't even retire with 2,000 hits or 300 homers, the infidelity of his anatomy keeping a fine career well short of Cooperstown. His endless comebacks have been thwarted by an array of maladies, none of his making or with any karmic connection. If not for two injury-addled seasons in 2015-16, Wright would have retired a .300 hitter, ending his career with a .296 batting average, and finished in the top 10 in National League MVP voting four times.

As someone who represented Broadway so well for so long, Wright deserves a curtain call, and the Mets will give him one this weekend. One more chance to stroll into the batter's box, to tip his cap to his fans one last time. And perhaps no one will cheer louder for Wright than Reyes, who returned to his home team and town. In a world that has become more vulgar, violent and divided, Wright reminds us why we stop fighting just long enough to watch our pastime.

Maybe we'll never know what could have been with Wright. But what we got was more than enough for a proper sendoff, and a seismic ovation. The Mets will have another captain, but will never have another David Wright.