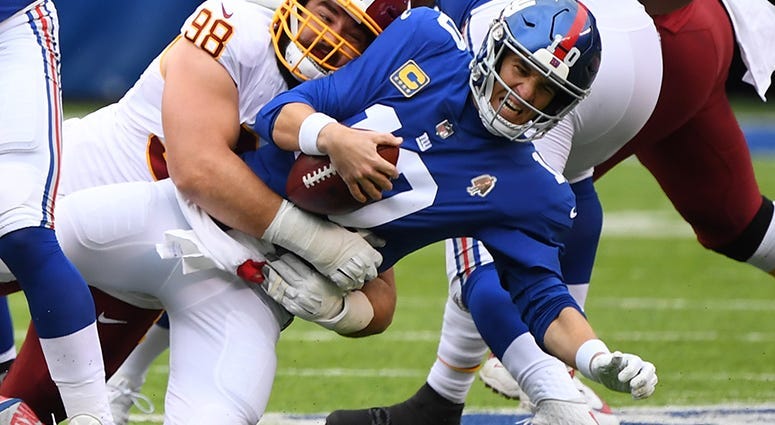 There's a cockiness about the Washington Redskins' defense.

They're shutting down some of the NFL's top running backs, making life miserable for opposing quarterbacks, not giving up many points — and doing a lot of talking.

Why not? The unit is the major reason the NFC East-leading Redskins (5-2) have matched their best start since 2008.

Safety D.J. Swearinger intercepted two passes, Matt Ioannidis had 2½ sacks, and the Redskins rode their defense to a third straight win, a 20-13 decision over the offensively inept New York Giants on Sunday.

In some sense that's true. The Redskins are winning and their offense is not lighting it up.

Adrian Peterson caught a 7-yard touchdown pass from Alex Smith and ran for a season-high 149 yards, with the last 64 coming on a touchdown jaunt with 3:06 to play. Dustin Hopkins added field goals of 53 and 39 yards for the Redskins

"I think we've invested some resources in the defense, hoping they would pay off," said Redskins coach Jay Gruden, whose team has a 1½-game lead in the division. "We hoping this is what we're trying to build. In this division, you've got to play great defense, in my opinion. This is critical for our success; until we get going offensively we have to win games like this. There's nothing wrong with that."

The three-game winning streak is their longest in two seasons.

Engram also let a scoring chance slipped away at the Redskins 32 when a short fourth-down pass went through his fingers with New York down 10-3 early in the fourth quarter.

The Giants came into the game wondering whether the trades this past week of starting cornerback Eli Apple and 2016 All-Pro defensive tackle Damon Harrison would be a problem. New York's defense was fine. Its offense wasn't, and the Redskins' defense was very, very good.

"We are not scoring enough points," Manning said. "We are playing in close games and we are just not finding ways to win them, unfortunately. We have to be able to move the ball more consistently and we have to control the clock to help out our defense."

A major difference was Washington capitalized in the red zone, especially in the first half. Smith (20 of 32 for 178 yards) capped a 10-play, 73-yard drive with a TD pass to Peterson, who stepped out of a tackle by backup linebacker Nate Stupar at the 4-yard line.

New York had two trips inside the Washington 20. Swearinger ended the first, stepping inside of Odell Beckham Jr., to intercept a slant pass at the 8-yard line.

Rosas kicked a 37-yard field goal on the second drive after passes of 11 yards to Beckham and 24 to Saquon Barkley got New York in scoring position.

Beckham had seven catches for 125 yards.

Hopkins missed a 41-yard field goal after the Swearinger interception.

Washington never lost the lead in the second half as its defense kept Manning ducking most of the day.

Giants: RT Chad Wheeler left in the second half with an ankle injury and was replaced by Brian Mihalik.

Giants: a much-needed bye. Return at San Francisco for Monday game on Nov. 12.