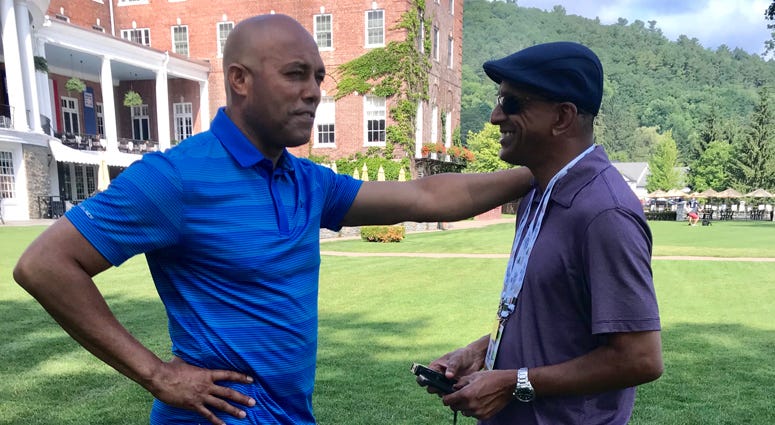 COOPERSTOWN, N.Y. -- Their big moments in Cooperstown are almost here.

Mariano Rivera and Mike Mussina chatted with WFAN's Sweeny Murti in Cooperstown on Friday, just two days before the Yankees greats are inducted into the Baseball Hall of Fame.

"It's here. It's happening. And the feeling is amazing," said Rivera, the game's all-time saves leader and a five-time World Series champion.

The Panama native reflected on his time in the minor leagues, when he was struggling with the English language while clinging to his dream.

"I was just fighting to stay in professional baseball because I couldn't communicate with my teammates, could not communicate with my pitching coach and then my manager," he said. "But yes, the Lord gave me the strength and the power to continue pursuing my dream and learn the language. And the rest is history."

Mussina, a five-time All-Star who split his 18-year career between the Yankees and Orioles, credited his good fortune with his health for helping him reach the Hall of Fame.

"I wasn't winning 20 games all the time or Cy Young Awards or World Series or striking out 3,000 guys," he said. "It had to happen the way it did to be effective all those years and to do my job consistently all those years and have some above-average years but to never have a major injury, never have surgery, to not ever miss a season or a half a season or pitch part of a season hurt and then finally figure out that you can't pitch (and that) you need to have something fixed. To make it through my career and not have to do that, that's why I'm standing here."
Pete Gergely/Yankees On Demand.

As for induction weekend, Mussina said he's trying to savor the moment.

"Obviously it's exciting and all that stuff," he said. "And it's a busy weekend, and I've got a lot to do, and you're trying to make sure you're in the right place at the right time and everybody's organized and know where they're supposed to be. But I'm just trying to take it all in at the same time. Because for me, as an inductee, this is a once-in-a-lifetime thing, so you don't just want to rush through it and blow it all off and then it's over and you're like, 'Wait a minute, I didn't even try to enjoy it.'"

Click on the audio players above to hear the interviews.

You can listen/subscribe to '30 With Murti' at RADIO.COM, the RADIO.COM app, iTunes and other places where podcasts are found. Follow Sweeny on Twitter at @YankeesWFAN.
WFAN is the flagship station of the Yankees. Tune in to 660 AM or 101.9 FM this season to hear all the action.