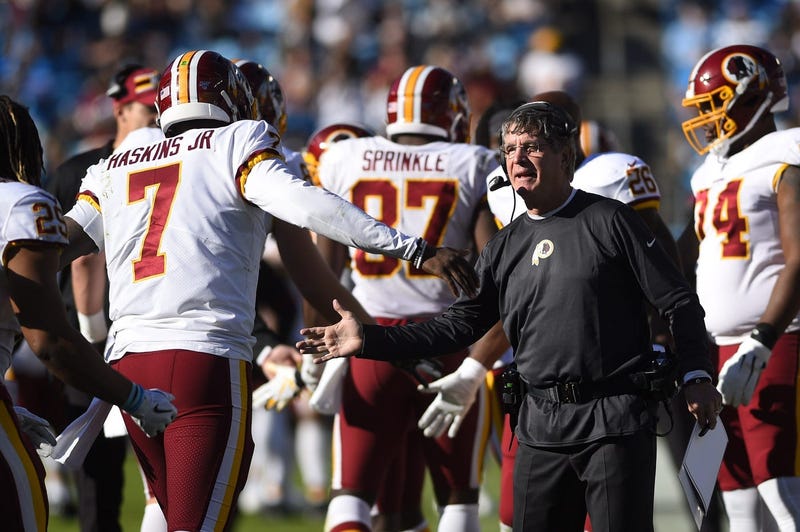 As the 2019 NFL Draft draws closer, Giants fans are hoping that general manager Dave Gettleman will make a selection that will help improve Big Blue’s fortunes following a disappointing 5-11 season. The 2019 NFL Draft will be held in Nashville and the first round will commence on Apr. 25.

The Giants currently own the sixth overall pick. Here’s a look at some of the players the mock drafts have Big Blue taking in round one.

From Vinnie Iyer of Sporting News:

“With Justin Herbert staying at Oregon, Haskins, should he come out early as expected, can make a beeline to being the first QB off the board to succeed Eli Manning. Haskins cemented his stock late in the Buckeyes' season, when he had some jaw-dropping games with his big arm and downfield accuracy. He has ideal size as a strong pocket passer (6-3, 220 pounds) with the right dose of athleticism.”

From Luke Easterling of USA Today:

“It’s long past time for the Giants to replace Eli Manning, and barring another team trading ahead of them, they should have their pick of this year’s top passers. Haskins was my top QB prospect in this class even before Oregon’s Justin Herbert decided to return for his senior season, and he’s well worth this pick.”

From Steven Ruiz of USA Today:

“After passing on a QB in last year's draft, the Giants have no choice. They have to take a quarterback this time around. Haskins is the best of a weaker class of passers, but he is worthy of such a high pick.”

“It's extremely unlikely that the Giants will land the top quarterback prospect in the class at No. 6 overall. Some team will trade up for him. Perhaps New York will do it, as it's more feasible to move up now in the wake of its loss to Dallas, which Giant fans should thank Jason Garrett for. Had the Cowboys sat their starters, the Giants would have to trade more assets to move up for a signal-caller. It just goes to show how inept Garrett is. At any rate, Giants ownership pushed for a quarterback prior to the 2018 NFL Draft, but general manager David Gettleman opted for Saquon Barkley instead. This looks to be the correct choice, but after what has transpired this year, I can't imagine Gettleman going against ownership's wishes again. Dwayne Haskins has a tremendous skill set, but is not a finished product at the moment. However, with Justin Herbert going back to school, he's far and away the top quarterback prospect in this class.”

From Dan Kadar of SB Nation:

“The Giants should take Haskins, they just might not be able to with the sixth overall pick. Although Eli Manning returning still seems like a toss-up, general manager Dave Gettleman was noncommittal on the quarterback.”

From Will Brinson of CBS Sports:

“I'm firmly in the camp that we'll see Lawrence go in the top 10 when all is said and done and I could see Dave Gettleman deciding that Lawrence is the best player on his board and grabbing him here regardless of their depth on the defensive line.”

From Ben Standig of NBC Sports:

“Have to consider quarterback with a top-10 pick this time, right? If the Bucs pass on a quarterback than the Giants have the first selection currently among QB-needy teams. Thing is there's some thought New York's management might run it back with Eli Manning for another season. Debate away. For a conventional choice, let's go with a needed pass rusher in Gary, the No.1 overall recruit in 2016.”