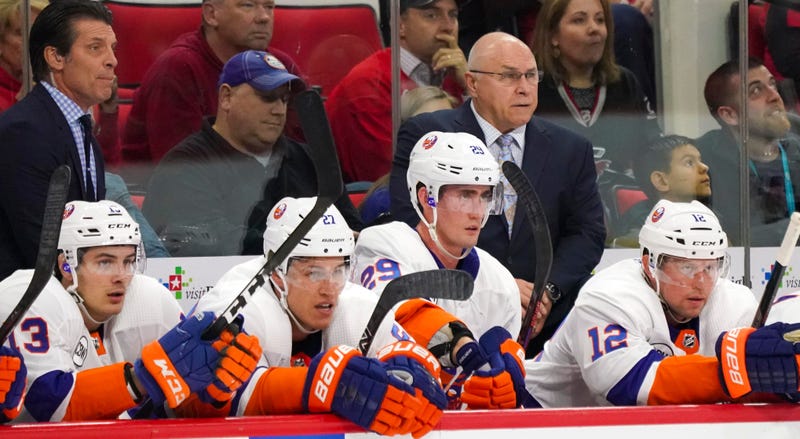 Barry Trotz didn't scan the rafters for the banner.

Back in Washington, he never once looked up for the championship flag hanging high above the home ice of the Capitals. Yet when he turned around for the national anthem, Trotz said he saw the big white letters standing out on the red banner: "STANLEY CUP CHAMPIONS 2018" around the Capitals logo.

When the anthem was over, he turned back to the visitors' bench and got back to work on trying to earn some more banners to hang — in New York.

After delivering the Capitals' first championship in franchise history, Trotz is well on his way to changing the culture in his first season as Islanders coach and bringing that proud organization back to prominence. By implementing the same discipline off the ice and structure on the ice he did in Washington, Trotz has the Islanders in first place in their division past the halfway mark of the NHL season for just the second time in the past 28 years.

"It feels very similar to the first year (in Washington)," Trotz said. "We were building something. We started with the structure and trying to make every moment count, the accountability, how we play, professionalism — all those things that make a pro athlete on and off the ice. We try to involve that with our organization as we did here. They've carried it on to the Stanley Cup, and we're in the infancy stages."

Modest to a fault and not eager to accept praise, Trotz considers the Islanders a "work in progress." But a lot of things are working:

They have won five in a row and 12 of 14. Their goalies lead the league with a .920 save percentage after ranking 28th last season. They have allowed the fewest goals a game in the league after being the worst in that category last season.

All this after point-a-game center John Tavares left in free agency to sign with his hometown Toronto Maple Leafs. The Islanders were expected to struggle, to say the least.

"I think a lot of guys took it as a little bit of an insult when we were starting to get ranked to be the worst team in the league after he left," fourth-line winger Matt Martin said. "(Trotz) gets the best out of everybody. ... He gives everybody the role and responsibilities, everyone's playing similar minutes every night, getting a real good opportunity to play. As a player, when you're getting those opportunities and you feel emotionally invested, you feel involved."

It could take a while for the Islanders to become a perennial Cup contender like they were four decades ago. But the building blocks are being put in place under first-year general manager Lou Lamoriello and Trotz's staff that includes longtime goaltending guru Mitch Korn.

"If you ask him, I'm sure he's not surprised either," Capitals center Nicklas Backstrom said. "I actually think they've got really good players there. But he's got that tendency to bring in a good system and to make sure you focus on the right things and he's always pushing guys to get better."

Reigning Calder Trophy winner Mathew Barzal is on almost a point-a-game pace in his second season, captain Anders Lee is on the way to a 30-goal season, and Robin Lehner and Thomas Greiss are stopping the puck at some of the best rates of their careers. Lee said he believes one of the Islanders' strengths is how someone different seems to step up every night, a result of Trotz balancing ice time and making them feel like a cohesive unit.

"He does a wonderful job of rolling with guys that are feeling it or lines that are doing well that night and giving them matchups and getting everyone involved," Lee said. "He has a really good sense of how the game is going, the flow of it, and he can make those quick decisions in-game that makes him so effective."

Lamoriello knew what he was getting in Trotz, who's fourth all-time in NHL coaching wins and had an impressive resume from Nashville and Washington even before winning the Cup. The Islanders lucked out in getting Trotz, who left the Capitals in a contract dispute in June days after the championship.

"There's no question that Barry Trotz is one of the elite coaches over the past X number of years in the National Hockey League," Lamoriello said. "He came with a group that had a very sort of down year for a lot of different reasons last year. We added some unique people as far as what they bring as far as character as well as abilities. I think that everybody just has made a total commitment from ownership through management that we were going to do everything that was necessary to have success, and either people were going to be on board or they weren't going to be."

Defenseman Brooks Orpik said it took some time a few years ago for the Capitals to understand why Trotz wanted some things, including the same set of rules for every player. The respect Trotz earned from Alex Ovechkin on down is growing with the Islanders.

"He's been awesome," winger Josh Bailey said. "As a group, you've got to be able to trust your leadership, which is our staff and Barry's the head of that for sure."

After Trotz got his Cup ring earlier this season and before he coached his first game back in Washington, he told Islanders players he wants to have the same championship experience with them.

"It's a day-to-day process," Trotz said. "You hear coaches use that, stay with the process. Just stay and keep growing as a team. And we don't know where we're going to end up."