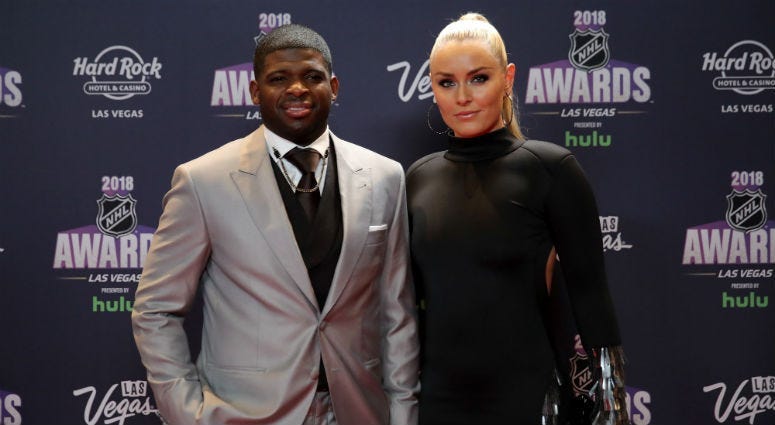 P.K. Subban is having quite the offseason.

Subban was traded to the New Jersey Devils on June 22, ending his three-year stint with the Nashville Predators. That, however, wasn't the most substantial move of the summer for Subban. On Friday, the Devils' defenseman confirmed his engagement to girlfriend and former Olympic skier Lindsey Vonn.

The 10-year NHL vet is known for being extremely personable in the hockey community with his outstanding philanthropy and larger than life personality. He even wore a Ric Flair inspired robe at his Devils' introductory celebration at the Prudential Center in July. When it came time for Subban to pop the question, the showman revealed to Vogue he wanted to keep it as simple as possible.

"I got the ring and said, ‘You know what? I’m just going to do it home.’ Everything kind of came together on that day," Subban told the magazine. "Everyone says the stars aligned—well, it was actually a full moon. I was worried because I knew she would want to be dressed up and not in her pajamas, and it just so happened she had a business meeting, so she was fully dressed up.”

Subban and Vonn first met at a previous ESPYs event before they began dating in June 2018.

In honor of @PKSubban1 and @lindseyvonn getting engaged, here's the story of how they first met and oh, always shoot your shot. -- pic.twitter.com/b4jt5ua46B

Vonn retired from professional skiing in February, where she claimed the bronze medal during her final race at the World Championships.

Subban tallied 31 points in 63 games for Nashville last season. New Jersey will serve as Subban's third team since beginning his career in 2010. The 30-year-old is a three-time All Star, earning his lone Norris Trophy honor for the league's top defenseman in 2012-13.