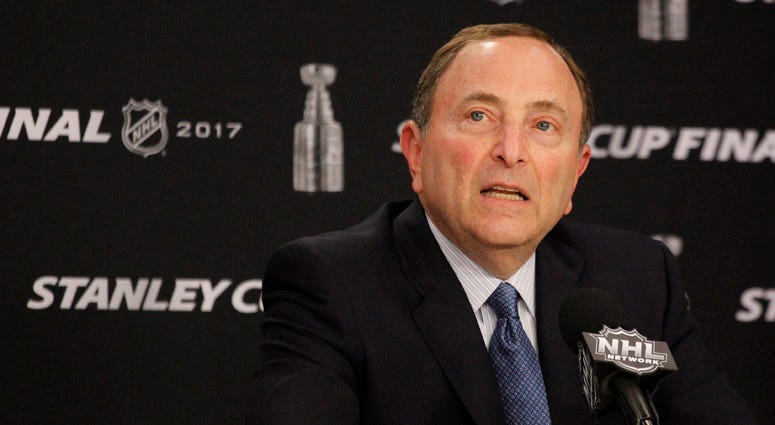 Commissioner Gary Bettman defended the NHL's approach to addressing player safety Tuesday while continuing to deny there's a link between concussions in his sport and brain damage.

In a combative interview with WFAN's "The Afternoon Drive With Carlin, Maggie and Bart," Bettman again said there's no scientific evidence to support that playing hockey can lead to CTE.

"All I can tell you is what the medical community says," he said. "The last International Conference on Concussion in Sport, which I believe was held in 2016 in Berlin, issued a consensus statement by the experts who were attending, and that statement says that there's yet to be a proven link between the two. What I say is completely irrelevant because I'm not a doctor or a scientist."

When asked about Boston University's research, which last year found evidence of CTE in the brains of 110 of 111 former NFL players, Bettman said: "Boston, they will tell you that as it relates to hockey, they don't have enough evidence to reach any conclusions, and they have told me that directly."

Bettman added that the NHL, which is facing a lawsuit from former players over its handling of concussions, "spends lots of time, money and effort doing a whole host of things with respect to player safety." But when Chris Carlin asked for some examples of steps the league is taking, Bettman only cited its protocol for identifying players who took hits to the head that should require in-game medical evaluation.

When Carlin told Bettman that the public perception is the NHL doesn't recognize a link between head injuries and long-term brain disease and therefore won't do anything to help protect players, the commissioner fired back: "I really respectfully disagree with your characterization of the public perception. And if that's your perception, I think it's off the mark."

Bettman also said comparisons between the NHL's response to concussions and the tobacco industry's denial decades ago that there was a link between smoking and cancer is "unfair" and "not based on any facts or any data that has been concluded."