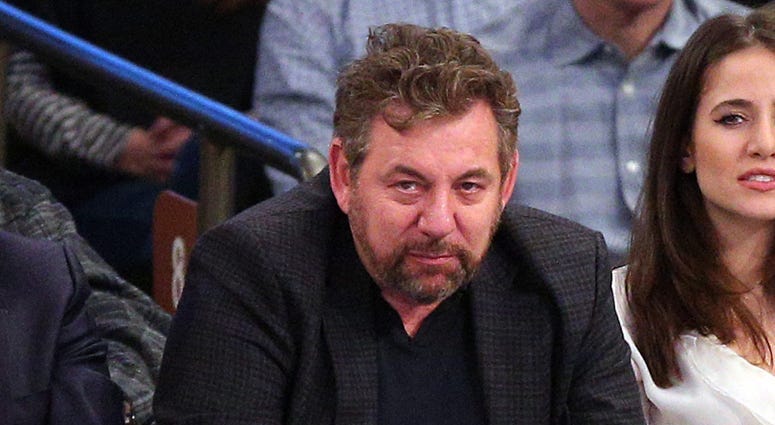 In a wide-ranging interview with ESPN published online Monday, the chairman of Madison Square Garden, which owns the Knicks, didn't rule out selling the team, adding there have been some very preliminary talks.

"No one has come through with a bona fide offer," Dolan said. "You hear numbers all the time. ... I think people have sent feelers out, but never any that were pursued."

Dolan said those feelers were around $5 billion.

MORE: Joakim Noah Says He Was 'Too Lit' To Play In NYC

"But those things, it's like a stock price," he said. "It's only important if you're going to buy or sell."

Dolan said it's important that he doesn't lose sight of the line between being the head of a corporation and a fan.

"I love the Knicks and Rangers, right, but you still have a responsibility to your shareholders," he said. "They're not there because they're fans. You don't invest hundreds of millions of dollars in a stock because you're a fan. You do it because you think that the business is going to increase in value, that the stock price is going to go up. You have a responsibility as the guy who runs the place to deliver on that for them, that's being open and transparent.

"And so in that position, I could never say that I wouldn't consider selling the Knicks. Now, my family is not in that position, and they are the majority shareholders. They hold the majority of the vote. ... As a majority owner, I don't want to sell, either. As the head of the public company, you can't say you can't sell, because then you're telling your shareholders that your own personal feelings about your assets are more important than their money. And they won't invest with you if you do that."

As for the performance of the team, which hasn't won a title since 1973 and hasn't reach the postseason since 2013, Dolan said he'd prefer to leave the decisions up to true basketball people and had hoped hiring Phil Jackson as team president in 2014 would've taken some of the burden off himself. But the Knicks' record actually got worse, and Jackson was fired in June 2017.

"I got more involved than I certainly am now. But the more you get involved, you start to learn what you don't know," said Dolan, who also owns the NHL Rangers. "I became convinced that I didn't think I could add anything to it, and so when the opportunity to bring Phil came in, I was like, 'Perfect.'

"I swore I would stay out of it, and I did. I stayed out of it. And it wasn't until the very end that I had to make a decision that it clearly wasn't working. I think Phil knew it, too."

Dolan added that he believes Jackson's insistence on running the triangle offense led to his failure, that players just would not buy into it.

Now the triumvirate of team president Steve Mills, general manager Scott Perry and coach David Fizdale are leading the Knicks. Dolan said he wasn't involved in the decision to hire Fizdale until he met with him essentially to sign off on the decision made by Mills and Perry.