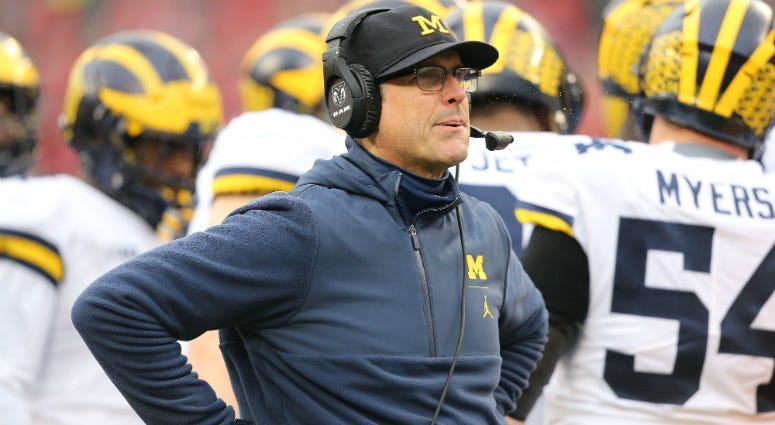 NEW YORK (WFAN) -- The Jets let another promising lead slip away from them on Sunday.

New York led Green Bay 35-20 early in the fourth quarter, but the Packers rebounded to force overtime and eventually win 44-38. The loss was another example of the Jets putting themselves in a good position only to falter late in the game in an embarrassing way.

These types of losses could have serious repercussions for head coach Todd Bowles, who may be relieved of his duties at the end of the season. General Manager Mike Maccagnan has apparently already begun looking for Bowles' successor.

According to a report from ProFootballTalk, the Jets have interest in making Michigan coach Jim Harbaugh their next head coach.

“The thinking is that the Jets plan to make Harbaugh a financial offer he can’t refuse, well in excess of the $7 million he earns at Ann Arbor … The Jets started digging on Harbaugh roughly four weeks ago, and the plan remains to attempt to interview him, which presumes that coach Todd Bowles will be fired after the season.”

Harbaugh is about to finish his fourth year at the helm at Michigan. The Wolverines finished the regular season 10-2 and are set to play Florida in the Peach Bowl on December 29.

On Monday, the Jets took to Twitter to deny the report that they were interested in Harbaugh.

Statement from Christopher Johnson, Chairman and CEO:“Todd Bowles is our Head Coach. There is no truth to the report of our interest in Jim Harbaugh."

The Toledo, Ohio native previously coached the San Francisco 49ers from 2011-2014. His first three years in the Bay Area were quite successful as he led his team to three consecutive NFC Championship games and to one Super Bowl. They lost that Super Bowl to the Baltimore Ravens, but Harbaugh has shown before that he can succeed in the NFL and that he can develop a young quarterback. Colin Kaepernick's best years came under Harbaugh's tutelage.

Still, Harbaugh may not be willing to leave Ann Arbor unless New York makes him an offer that he can't refuse. He told ESPN at the beginning of December that he wasn't leaving Michigan.

The Jets will have a chance to end their campaign on a high note against a bitter rival when they play the Patriots in Foxborough on December 30.