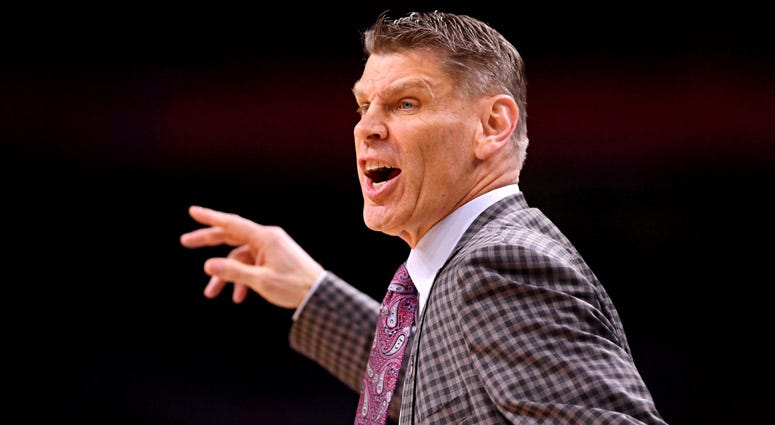 After St. John's offered its basketball head coaching job to Porter Moser Monday night, Moser informed the school Tuesday evening that he will be staying at Loyola-Chicago, according to Adrian Wojnarowski.

Moser, 50, was on campus Monday and then went to dinner with St. John's brass, the New York Post reported. Adam Zagoria of The New York Times and Forbes reported Tuesday morning that Moser wasn't sure if he wanted the job and would meet with Loyola officials before making a decision.

Porter has spent 15 seasons as a college head coach -- the last eight with Loyola -- but 2018 was the first time any of his teams reached the NCAA Tournament.

Loyola was a No. 11 seed last year and upset Miami, Tennessee, Nevada and Kansas State on its way to the final weekend of the Big Dance. Sister Jean Dolores Schmidt, the Ramblers' enthusiastic 98-year-old chaplain, became a national sensation as she cheered on the team throughout the tournament.

Loyola didn’t have as much success this past season, going 20-14 and losing to Creighton in the first round of the NIT.

Before being hired at Loyola in 2011, Moser was the head coach at Illinois State and Arkansas-Little Rock. He is 246-226 over his career.

St. John's has reportedly also shown interest in Tim Cluess, who has led Iona to six NCAA Tournament appearances in nine years. His buyout -- believed to be $2 million to $3 million -- has been a sticking point, sources told the Post.

According to WFAN's Jon Rothstein, Cluess had plenty of support internally at St. John's late last week before the school's focus shifted elsewhere.

Sources: Tim Cluess had immense support internally at St. John's late last week and then the direction of the search shifted. Administration was conflicted as to who should ultimately replace Chris Mullin as the Red Storm's head coach. #SJUBB

The Red Storm are looking for a replacement for Chris Mullin, who resigned last week after four seasons leading the program.