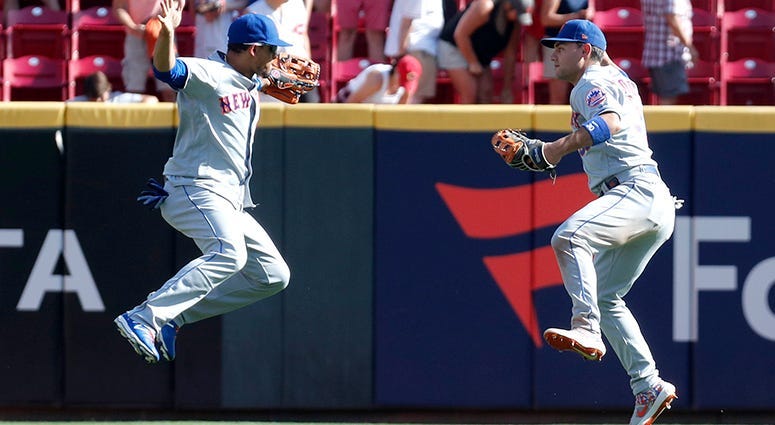 As the July 31, nonwaiver deadline quickly approaches, the Mets are set to be one of the league’s top sellers.

“Obviously, the trade deadline is coming up, and that’s a big pressure point in which to better your club," assistant general manager John Ricco said. "Certainly, we’re going to take advantage of that and look to be active."

As some players are inevitably seeing their final days in Flushing, here is a look at the guys  who are set to generate the most buzz around the trade deadline.

DeGrom has garnered the most attention of any Met available at the deadline, and rightfully so.

The 30-year-old right-hander is an NL Cy Young front-runner boasting dominant stats with a 1.68 ERA and 10.9 strikeouts per nine innings.

DeGrom’s name has been attached to the Yankees for weeks, as the Bombers search for an arm to solidify their rotation.

DeGrom will likely not to be traded unless a truly remarkable offer is made to the Mets.

“For me, everything has to be on the table," Ricco said. "But you have to look long and hard before you move a game-changing, top-of-the-rotation pitcher."

DeGrom is under team control through the 2020 season.

Like deGrom, Syndergaard continues to be mentioned in trade speculation.

The 25-year-old has pitched in just 11 games this year due to injury, though given his age and undeniable stuff, any deal for him would require an impressive crop of assets.

The flame-throwing righty has registered a 3.06 ERA and 10.6 strikeouts per nine innings this season.

Syndergaard is under team control through the 2021 season.

Though deGrom and Syndergaard have been at the heart of seemingly all Mets-related trade rumors, don’t be surprised if Wheeler is the arm the Mets move at the deadline.

The 28-year-old is throwing the best stuff of his injury-riddled career. Wheeler has a 3.44 ERA since June 1 and has shown an increased velocity on his fastball consistently over the last several starts.

The Yankees have reportedly inquired about Wheeler, who is under team control through 2019 and is arbitration eligible after this season.

Matz sits in a similar position as Wheeler.

The 27-year-old has not been able to reach the potential the organization had hoped for him, though the left-hander still boasts solid numbers, with a 3.38 ERA and eight strikeouts per nine innings.

In a market with several teams desperate for starting pitching help, the Mets could find value for Matz as a formidable mid-rotation starter who is under team control until through the 2021 season.

It almost seems to be a certainty that Cabrera will be dealt at the deadline. The 32-year-old infielder is in a contract year and, given his age, is unlikely to be re-signed by the Mets.

The Dodgers are reportedly interested in Cabrera, as they look to boost their infield amidst the tightly contetested NL West.

Familia, like Cabrera, is widely expected to finish the year in a different uniform.

The right-handed closer will become a free agent after this season, and the Mets will aim to deal him to a contender looking to bolster their bullpen.

Though Familia is not the pitcher he once was, the reliever still boasts a respectable 2.95 ERA and 16 saves over 39 appearances this season.

Familia should have some trade value among contenders, as in recent years the importance of the bullpen has been extremely apparent in the playoffs.

The Cleveland Indians, Arizona Diamondbacks and Houston Astros are among that teams that will be looking to acquire relief arms at the deadline.

Flores’ name is once again being thrown around in trade rumors.

Though the infielder, who famously cried on the field after false reports of a trade to Milwaukee surfaced in 2015, has made it clear he wants to stay in New York.

Before a game in Toronto last week, Flores told Mike Puma of the New York Post, “I don’t want to go anywhere.”

Flores is one of the few Mets to have shown upside offensively. He has a .267 batting average and has demonstrated a unique ability to come through in the clutch -- he owns four walk off hits this season.

Flores’ versatility in the infield and above-average bat should afford the Mets some value on the trade market.

The Mets should be at the center of the trade deadline, with players such as Familia and Cabrera likely headed for new clubs.

Wheeler and Matz could be dealt, too, as several teams need reliable starting pitching.

The Mets are less likely to trade away their two studs at the top of the rotation. While it’s certainly possible for a trade to occur, expect Syndergaard and deGrom to stay with the Mets beyond July 31.

“We’re not out there actively looking to move Jacob or Noah, by any stretch,” Ricco said.

The Mets will surely be active at the trade deadline, though who will be dealt and what to expect in return remains to be seen.