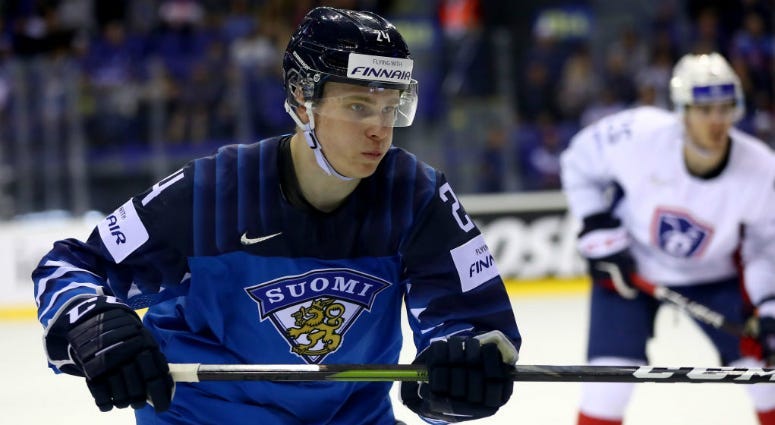 The Rangers are getting some reinforcements in the form of a Finnish phenom.

New York selected Kaapo Kakko with the second overall pick in the 2019 NHL Draft in Vancouver. Kakko, the first international player selected in the draft, was taken only behind Jack Hughes (New Jersey).

Kakko was widely touted as the No. 2 choice after Hughes, but he made a real case for being chosen ahead of Hughes during the late spring international competitions. Finland repeated as IIHF Worlds champs, and Kakko was able to contribute seven points in 10 games along with a +10 rating to boost the Fins.

The six-foot-two forward also chipped in five points in IIHF World Junior Championships where Finland also won gold. Kakko continued his period of dominance when he helped his country capture first at the IIHF U18 World Championship in 2018.

Kakko and Hughes have gone head-to-head at the international level before, most recently in the 2018 IIHF World Juniors gold medal game where Kakko was able to score en-route to a 3-2 win for Finland.

The 18-year-old lit up the top Finnish league in his rookie year in 2018/19. He tallied 38 points (22 G 16 A) for his club TPS and was named Rookie of the Year for his performances over the course of the season.
USA TODAY Images

Kakko is a proven winner, having won three separate times already on the international stage before even reaching the NHL. He has a body that is ready for the pros, especially when compared with other prospects his age, and he will fill in for a Rangers team that needs some help in their offensive zone.

He doesn’t have the quickness or flashiness that Hughes already possesses, but he is ready to make an impact almost immediately for the Blueshirts, and he has the experience and international pedigree needed to shine under the bright lights of Madison Square Garden.