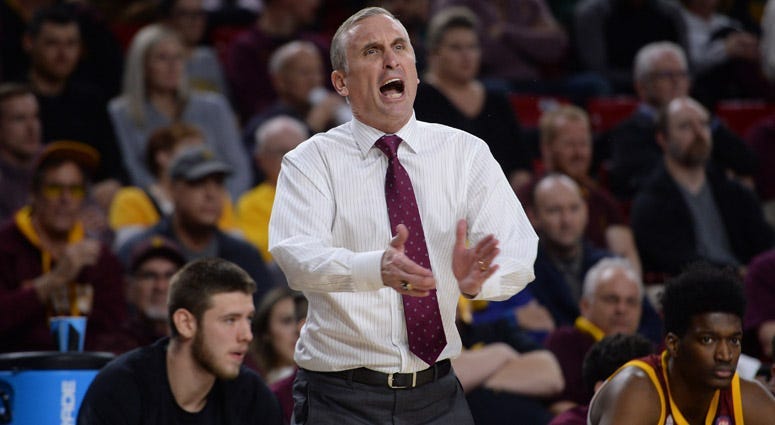 The St. John's program might not have the glowing reputation it once did, but it's still one of the more attractive jobs in college basketball.

The school is in the market for a new coach now that Chris Mullin has stepped down. Here's a look at six coaches whom St. John's might consider for the job.

Sources tell Rothstein that the Arizona State coach is expected to be at the top of the Red Storm's wish list. Hurley, a former Duke star, and St. John's athletic director Mike Cragg both have ties to the Blue Devils, which never hurts.

A New Jersey native, Hurley has gone 73-58 in four seasons with the Sun Devils, leading them to the NCAA Tournament the past two years -- they beat Mullin's Red Storm this year. Prior to arriving in Tempe, Arizona, Hurley went 62-42 with an NCAA Tournament appearance in two years at Buffalo.

Hurley, 47, would have to pay Arizona State a $2.5 million buyout if he leaves for another job.

Cluess, 60, has built Iona into a MAAC power and NCAA Tournament regular. In his nine seasons at the New Rochelle school, the Gaels have reached the Big Dance six times, including each of the last four seasons.
Mark Konezny/USA TODAY Images

A Queens native, Cluess played at St. John's from 1979-81 before transferring to Hofstra.

He is Mike Francesa's coach of choice.

I’m going to make one statement-and only one-about St. John’s basketball. It is time for the school to hire the coach it should have hired years ago: Tim Cluess.

Pitino, 66, would be the most high-profile hire, but also the most controversial.

The good? Pitino won national champions at Kentucky and Louisville, and his teams have been mainstays in the top 10. He also is a former head coach of the Knicks and Celtics.

The bad? Scandal seems to follow Pitino these days. Louisville fired him in 2017 following an alleged "pay for play" scandal involving recruits. There was also a sex scandal involving players, recruits and prostitutes that led to the NCAA stripping the Cardinals of their 2013 national title. And in 2009, Pitino was the target of an extortion plot after a sexual encounter with a woman in a Louisville restaurant.

A Long Island native, Pitino is currently coaching in Greece.

The former St. John's star has not found a coaching job since being fired by the Golden State Warriors five years ago.

Jackson, a former All-Star point guard with the Knicks, took over a downtrodden Warriors franchise and returned it to respectability, going 121-109 in his three seasons (2011-14). Golden State reached the playoffs each of his final two seasons and advanced to the second round in 2013.
Kirby Lee/USA TODAY Images

But will St. John's be reluctant to turn to another star alum after using a similar blueprint in hiring Mullin?

Jackson, 54, currently works as an NBA analyst for ESPN.

Matta was fired by Ohio State in 2017 after leading the Buckeyes to nine NCAA Tournament appearances in his 13 seasons -- including two Final Fours.

Matta, 51, has had health concerns related to his back and foot. Despite that, he told Cleveland.com last year that he's open to returning to coach if the opportunity is right, and he's interviewed for jobs.

It's only a matter of time before a bigger school comes calling for Odom, who has led Maryland-Baltimore County to a remarkable turnaround.

In 2016, he took over a program that had averaged six wins over the previous seven seasons and has since led it to three consecutive 20-win campaigns. And of course, the Retrievers made history last year when they became the first No. 16 seed in NCAA Tournament history to beat a No. 1 seed (Virginia).

UMBC's athletic director admitted in an interview last year that Odom, 44, “wants to, at some point, I think, see if he could (coach) on a bigger stage.” You can't get much bigger than Madison Square Garden.