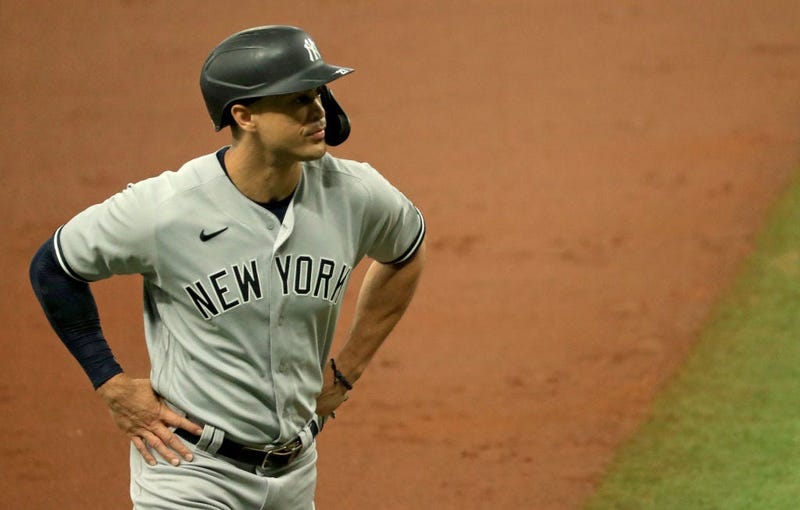 There’s some good news and some bad news when it comes to Giancarlo Stanton.

First, the good news: he has a grade 1 hamstring strain – which is the least serious strain.

The bad news: a “reasonable” recovery time would be three to four weeks, according to manager Aaron Boone.

That would mean it is possible the Yankees do not have Stanton back in the lineup until two weeks left in the season.

“I’m hurting for him,” Bonne told reporters before Tuesday’s game against the Atlanta Braves. “I know what he’s done to be here. His play speaks for itself. Hopefully it’s something that doesn’t end up keeping him down too long.”

Stanton, 30, appeared in just 18 games all of last season due to various injuries and appeared to be rejuvenated through the first two weeks of the pandemic-shortened season this year.

The designated hitter was posting a slash line of .293/.453/.585 with three home runs and seven RBI through 14 games this season before he experienced tightness in his left hamstring in the second game of a doubleheader on Saturday against the Rays while running the bases.

Clint Frazier, who hinted on Twitter Monday that he was rejoining the team, was officially recalled from the team’s alternate site to take Stanton’s place on the roster, although the left-handed Mike Ford was penciled in as the designated hitter for Tuesday’s game.

The 25-year-old Frazier has flashed his power in previous seasons, but shortcomings in the field as well as depth issues have prevented him from being with the team this year and the second half of last season.

Now, Frazier will get a chance to fill the power void in the Yankees’ lineup along with Ford.

Aaron Judge – an early frontrunner for MVP – could also be moved to DH occasionally in order to keep him well-rested.