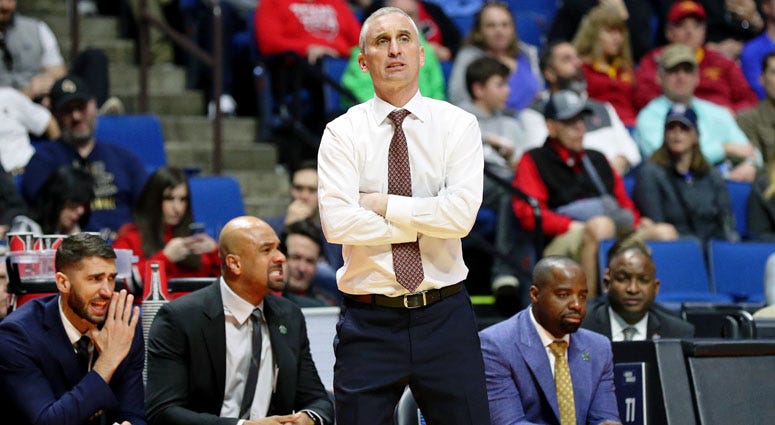 St. John's reportedly has its sights set on Bobby Hurley as its next coach. But could Hurley's brother stand in the way?

Talking to WFAN's Evan Roberts on Tuesday, WFAN college basketball insider Jon Rothstein said that the relationship between Bobby Hurley, who is currently at Arizona State, and Dan Hurley, the coach at Connecticut, could factor in.

"Bobby Hurley and Danny Hurley talk every single day. They're best friends. They're brothers. And when St. John's and UConn ... when those recruiting battles are real and they're intense, it drives a rift between both programs if both programs are relevant."

Chris Mullin stepped down as the Red Storm's coach Tuesday, and Bobby Hurley is believed to be the school's top choice to succeed him, Rothstein reported. St. John's athletic director Mike Cragg previously worked at Duke, where Bobby Hurley won two national championships as a player in the early 1990s.

Hurley has gone 73-58 in his four seasons at Arizona State, leading the Sun Devils to the NCAA Tournament the past two years. Last month, Arizona State beat St. John's in a First Four game.

After losing star guard Shamorie Ponds to the NBA draft and seeing prized junior-college recruit Cam Mack back out of his commitment, St. John's is facing another rebuilding job, Rothstein said. That could be another obstacle in attracting Bobby Hurley, a Jersey City native, back to the East Coast.

"Arizona State's at a place right now where they've been to two straight NCAA Tournaments, they won a game this year, the program is recruiting well and so on and so forth," Rothstein said. "To come here, even if it's coming home, to go through what looks like another back-breaking rebuild, you have to ask yourself whether you want to entertain that and undertake that."

Rothstein said that while St. John's will first pursue Hurley, he believes Tim Cluess, who has led Iona to four straight NCAA Tournament appearances, is on the short list as well.

As for what happened between Mullin and St. John's?

To hear the interview with Rothstein, click on the audio player above.