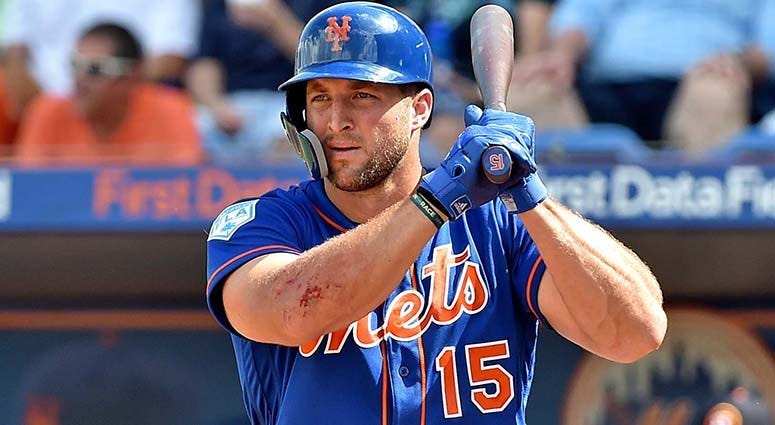 A lot of people thought at first that signing Tim Tebow was a publicity stunt by the Mets. As time has gone on, it has been shown that isn't the case. In fact, it's not as crazy as it used to be to say that Tebow could potentially play in Queens in the big leagues one day.

The Heisman-Trophy-winner-turned-NFL-QB-turned-Mets-outfielder joined WFAN's Mike Francesa down in Port St. Lucie, Florida, on Monday following a game in which he had his first two hits of the spring.

"I think I'm improving. I'm getting there," said Tebow. "I've made a lot of strides -- the little things. I think I'm making those strides."

While he initially went the football route, it was actually baseball that Tebow loved first.

"Baseball was my first love before football," he said. "I started playing baseball when I was 4. If you asked me most of my life, 'What are you going to do?', I thought I would be a baseball player. I fell in love with football, too. There was a lot of times I thought this was something I'd love to be able to do. It was the hardest decision of my life to choose football over baseball. I truly wept over it. (Former Florida coach) Urban Meyer was a big difference. He said you can play baseball, too. When he first recruited me, he came to my baseball games."

The 31-year-old Tebow, who will likely start the season in Triple A, didn't care what other people thought. Playing baseball was always his dream.

"If we go after something and we fall short ... who said that's a bad thing? Sometimes we don't make it," Tebow said. "Not everyone is going to be the best in the world. At least I don't have to live with regret. I didn't want my life to be defined by hypotheticals. I wanted to go after my dreams. My dreams were more valuable than other people's opinions."

Does Tebow have a goal? Does he expect to be in the big leagues this season?

"The goal is to be able to improve every day and be ready if I have the opportunity," he said. "I feel like every year, it has shown -- I've made strides. I'm constantly making those improvements and strides. I feel confident. I feel like the last 2 1/2 months of last year really helped me ... be consistently hitting .300 for a good stretch of time until I broke my hand. Just taking that into the offseason and now really trying to take those next steps."

Is baseball stopping Tebow from doing everything else? He's hosting a new show on CBS produced by LeBron James. He's done numerous other appearances on TV and elsewhere.

"It does make you say no to a lot of things," said Tebow. "There's seasons in your life. The season of baseball, I'm all in. What's after that, I don't know. I love everything else I can do. While I'm doing this, I'm all in on this."

You can listen to the entire Tebow interview with Francesa above.