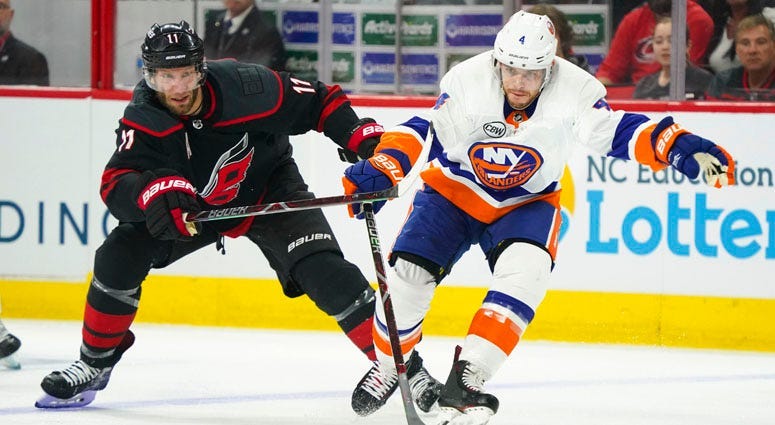 It’s down to the final nine games of the 2018-19 National Hockey League season and if anyone tells you they expected the New York Islanders to be challenging for a Metropolitan division title, right behind the defending champions in wins, points and ROW (Regulation + Overtime wins), you have my permission to call them a bold-faced liar.

I had them in my pre-season ‘predictions’ as finishing with 80-82 points coming off a summer where they replaced you know who with Leo Komarov, Valtteri Filppula, Tom Kuhnhackl and Matt Martin. Yet, here they are with 91 points through 73 games (62 percent of all possible), a plus-28-goal differential (seventh in the NHL), two goaltenders challenging for the Jennings and Vezina trophies, a head coach who will win the Jack Adams award and a president/general manager who is a shoe-in for the hockey hall of fame.

Fans are not used to all this delicious goodness regarding their team as they scan the morning internet of hockey news and statistics. They have been told for months now that the ‘puck luck’ they are receiving won’t last, it can’t last and the team will slowly slide back down to the middle of the standings, where they ‘belong’. Trotz and the band of blue collar workers that follow him have said, ‘screw that, not happening on our shift’.

It’s that team-first mentality that has prevented New York from losing more than two consecutive games in regulation time all season (they’ve dropped two five times). A couple of weeks back, facing some adversity, they lost three of four in between a demolition of the Toronto Maple Leafs. Since? They have won five of eight to keep pace with the Capitals at the top of the division, just ahead of the Pittsburgh  Penguins.

Now, they have not been pretty, mind you, in fact, some have been downright ugly. The wins over Ottawa (5-4, 4-2) were not convincing, they dropped a home game to the Flyers 5-2, played decent games in shutting out Columbus and beating Montreal before riding the roller coaster this past weekend. Playing their best game in weeks, they could not finish in Detroit, falling to the Wings 2-1 before taking back some PDO in Minnesota to win 3-2 in overtime.

Last night’s horror show at Nassau Coliseum, a 5-0 trouncing by the Boston Bruins, was likely just a blip on the radar. Yes, New York got completely dominated to the tune of 68-31 Corsi (39-13 shots on goal) and never really seemed to be able to compete with Boston. However, to write them off on one bad game and go pounding your chest that you were right is foolish given you cannot just write off a record of 42-24-7, good for 7th best in the entire league. These nights, unfortunately, happen.

Wins are wins, points are points and you can bet Trotz and the Islanders are not giving any back, no matter how ugly it might look to the eyes. When the playoffs begin on April 10, the Islanders will be there and it’s starting to become evident the potential matchups that could present in the first round.

If they overtake the Capitals and hold off the Penguins to win the division, they would host the first round at Nassau Coliseum against the top wild card team in the Eastern conference (Carolina currently, Columbus, Montreal, Pittsburgh?). If they finish second in the Metro, they would host the third-place team (Pittsburgh currently, could be Columbus/Carolina). Third and that scenario flips, they would travel to second place team. If they fall to a wild-card spot, a date with the Lightning or Metro winner starting on the road would be, obviously, the most undesirable route.

In the playoffs, games get tighter, scoring gets lower, referees whistles become less frequent. Some would say the Islanders have been playing those types of games all season long. First in goals against (178) but 20th in goals for (206). They have failed to score more than two goals in seven of their past 10 games (5-5-0) and have done it only once in their past six.

Trotz had this to say after Sunday’s grueling win over the Wild. “Today was a good character test. We weren’t getting the calls that we wanted, we were getting outplayed in some areas, but we hung in there and at the end of the day, we had some backbone in the third.”

Backbone…when was the last time that word was used to describe the New York Islanders? These days, it must be used when talking about the entire organization. They are going to enter the year-end tournament with 15 other hopefuls praying that backbone can overcome a lack of offensive firepower. It didn't last night, but again... that was just one game.