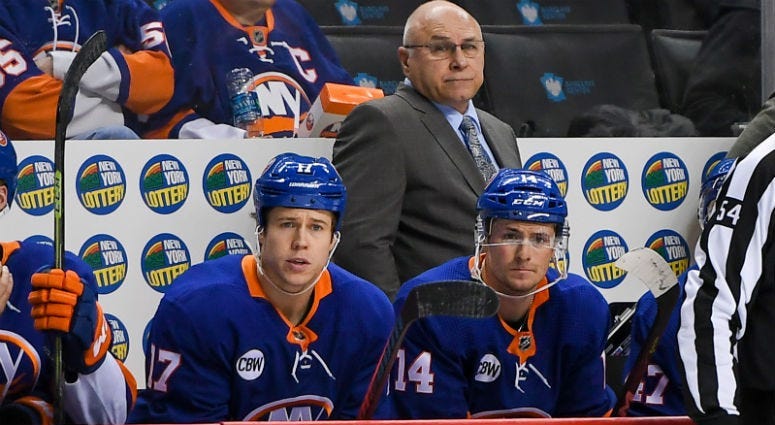 The struggle is real. Futility might be the word that best describes the Islanders special teams over the course of the past 15 games since November 1. It’s almost at the point where the team might be best served if the league switches to NFL style rules and allows you to ‘decline’ the penalty for a participation trophy of some kind. Just to say, you know, ‘hey, we tried’.

Since November 1, the Islanders have been an up and down team. Winning two, losing three then alternating two wins and two losses over the next eight games. They have a -6 goal differential and -17 shot differential. Yet, it’s the power play that has really sucked the life out of the offense and defensively, the penalty kill has not been much better.

Head coach Barry Trotz has stuck with his main personnel, some might say, for too long. But ask yourself, who does he have at his disposal to replace them with? Putting Mathew Barzal back onto the top unit leaves a second unit with Cal Clutterbuck, and no offense to Cal and his ‘skill set’, but it is not exactly made for the man advantage. It also diminishes the offensive weapon that is Ryan Pulock’s shot, as he played only 0:30 on the power play in last night’s 3-1 loss to the Winnipeg Jets in Brooklyn.

So, while there may be small changes to make, player wise, it looks to be ‘what you see is what you get.’ These are the ones who are going to have to work their way out of a four for 46 funk (9 percent) while Valtteri Filppula and Leo Komarov are going to have to lead a penalty kill that just has to be better than 37 for its last 49 (76 percent).

New York is essentially .500 (13-10-3), yet still sits in third place of the Metropolitan division, four points from the top but only six clear of the bottom. Teams are catching up, some starting to reclaim their mojo. If the players can’t get the special teams on track, it threatens to derail the entire season. Games can very much be won and lost on the power play. New York’s latest setback is proof of that alone.

Barry Trotz, at 56-years-old, may not be as agile as he once was. However, he still walks strongly, with an aura of confidence and respect circling him like a protective barrier. His stocky physique with tremendously broad shoulders mirrors the way he talks after Islanders games, whether they are wins or losses.

"We played a really solid game against a high octane team. I thought we checked well, got lots of chances, couldn’t get something to pull away. It all turned when we took a penalty 200 feet from our net.” Trotz said last night. “There weren’t too many issues in the game, other than those two minutes.”

Trotz continued with his line of the night. “They don’t get paid to hang in. They get paid to win. The way we’re playing, that will get us a lot of wins. But, every moment, against good teams in the NHL, they can make you pay. Take your foot off the gas, have a brain cramp, it will be in the back of your net. We have to recognize those moments and manage them.”

One of the bigger ‘brain cramps’ of the night came when sophomore Mathew Barzal, who is struggling to take command of the vacated #1 center role, took a ridiculously dumb penalty right after Anders Lee netted his 10th goal to give the Islanders a 1-0 third period lead. Winnipeg scored on the ensuing power play and netted the game winner with that momentum minutes later. It was not long ago Barzal was benched in the second half of the third period against the New York Rangers for taking another ill-advised offensive zone penalty that let the Rangers back into that game.

“You can’t grab a guy’s stick, plain and simple. It’s a penalty, I don’t care how you try and explain it, it’s a penalty. You don’t need to. If it’s around your head or whatever, they get the penalty for that, hopefully." Trotz said.

Barzal seemed to deflect a bit post-game when discussing the holding the stick call. “Yeah, it's unfortunate. We get a goal and I go out and take a penalty. Tough break, then they get the second one quick. We gotta get on the board. It's tough to win with one goal in the NHL."

Coliseum an Expected Success. Will it Continue to be?

The Islanders' return to Nassau Coliseum was as successful as expected, as fans packed the venue and willed their team to a come from behind 3-2 win over the Columbus Blue Jackets on Saturday. The players clearly felt the energy, as evidenced by Casey Cizikas’ walk-off interview with MSGs Shannon Hogan. It’s extremely underrated how a crowd and venue can lift a team.

The let down in Brooklyn last night was also expected, as a crowd of maybe 7,500 watched the Islanders lose to Winnipeg (notice how attendance numbers, all of a sudden, don’t come out towards the end of the second period via usual media sources?).

The excitement of a return to Nassau County, who didn’t care a lick when the team was leaving, will be tested with upcoming weekday dates against Pittsburgh, Chicago, Carolina and New Jersey through the end of January. The team will play no games at Barclays Center after February 16. As difficult as its proven to be to commute to Brooklyn (thanks LIRR), it's just as difficult for people from western areas to get to an arena with zero accessibility outside of vehicles.

In terms of finances, as long as Brett Yormark is willing to keep his end of the bargain and pay the team a guaranteed $40 million per season as part of the original lease agreement, I see no reason why they won’t play full-time at the Coliseum until Belmont is completed, starting next year. Yormark is a player in both buildings anyway, and could open Barclays to other, more appropriate events. Belmont is going to, ultimately, be competition for Yormark. Whether he likes it or not, there's just no getting around it.

Barclays, for hockey, is dead. There is zero atmosphere and even less commitment from the BSE operations team to make it a desirable venue to attend, nonetheless play in. The effort is minimal and it clearly shows.