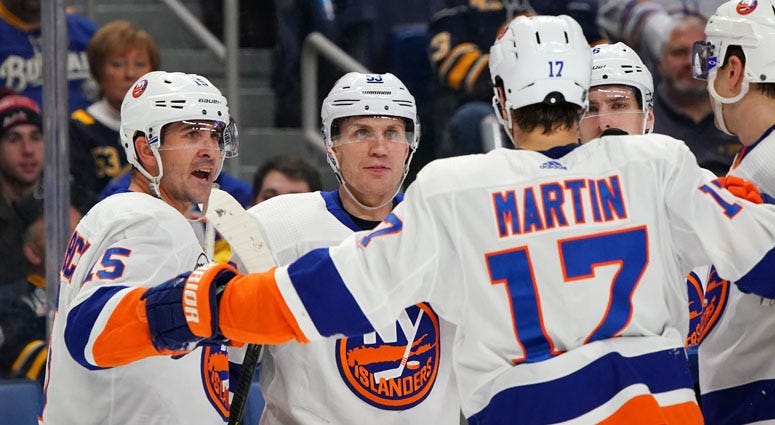 Fifty-six games will shape what comes in 14 days.

Islanders team president and general manager Lou Lamoriello has watched head coach Barry Trotz work his magic to the tune of a 33-17-6 start that has the club in third place in the entire Eastern Conference. Buoyed by a team-first attitude, a renewed commitment to defense and two goaltenders both above a .927 save percentage, it leaves Lamoriello with some important decisions coming up as the annual trade deadline on Feb. 25 approaches.

There are two distinct and arguable points of view as the team heads in as buyers, a much different position than they have been in over recent years. There is no clear right or wrong answer, with each posing its own set of challenges to just how much you tinker with what got you here.

People say the Islanders have a deep talent pool that runs the gamut from the AHL to the collegiate ranks. However, one could argue there still is insufficient center depth in the system, and once you get past Oliver Wahlstrom and Keiffer Bellows, the forwards don’t look all that conducive to making a major acquisition. Joshua Ho-Sang and Michael Dal Colle at current just don’t hold the trade value necessary to bring in a legitimate sniper.

On defense, we have all seen first-hand the skill that Devon Toews has brought to this lineup, but the picture is similar on the back unit. Once you get past Toews and the growing-by-the-day Ryan Pulock, Noah Dobson and Bode Wilde wait in the wings. After that, the picture gets much more murky with prospects including Sebastian Aho and Parker Wotherspoon.

Right now, the Islanders have dialed into a winning formula, with four lines working toward a common goal and playing for each other. The intangible is a tight-knit locker room with each member of the 23-man roster buying what Trotz is selling. There is no other explanation for how a team can go from last in the league in goals allowed a year ago to lead the NHL in the least goals allowed the next season and run off an incredible 25-game stretch as they have (18-5-2).

Throw in the fact they are accomplishing all this without a point-per-game scorer and nobody on pace for even 30 goals, and you have the makings of a special group. To bring someone in, with the hopes they click in the new system and with their new teammates, without much time or room for error, you have to move someone out. That is what makes this trade deadline the most tricky the organization has, arguably, ever faced.

The opposite way of thinking is Lamoriello needs to realize this is an opportunity for immediate success. To not throw away what could be a special season by sitting idle and trusting that everything going right will continue to go right in the season's final stretch. To realize a failing power play could doom this team come playoff time when the checking gets tighter and penalties are fewer, leading to increased reliance on capitalizing on the few chances you may get with the man advantage. To acknowledge the recent struggles on offense, which have produced two or fewer goals in five of seven games in February.

It’s also recognizing that prospects have been all this team has talked about over the past five or so years. "Wait until this guy comes, he’ll fix everything, he’s going to be a star," only to see the 50/50 odds that are attached to most prospects doesn't necessarily go the Islanders' way in many cases. You can’t hoard them forever, and at some point, you need to make a bold move to declare yourselves legitimate contenders. Show the locker room that you are serious about making a true run to the Stanley Cup.

When you talk about who the Islanders might need, that list includes a dynamic forward who has already announced he is definitely testing free agency come July 1, two forwards in Ottawa who the Senators are still hopeful of re-signing and a shooter out in Los Angeles whose best days might be behind him and would have to come with a good chunk of salary retained. Without their own second-round draft pick and no third- or fourth-rounder, the ability to make a true impact move is made all the more tricky. All but the last come as potential unrestricted free agents, and do we really want to cross that road again? With Anders Lee and Brock Nelson already not signed to date?

Lamoriello, at 76 years old, is assumed to be grooming his son, Chris, to be the next general manager of the Islanders upon his retirement, which you would have to think comes sooner rather than later. The desire for the father to not leave his son with personnel headaches and salary-cap issues must be weighing heavily on his mind. As much as the thought of a shiny new trophy that New York hasn’t sniffed since the 1980s must be.

I can’t sit here and pretend to know what the right answer is, as there doesn’t seem to be one. Just two opposing schools of thought on how the Islanders should approach the situation. And that’s not even to mention what might be in the heads of Scott Malkin and Jon Ledecky, who must be frothing at the mouth like a rabid dog at the thought of a deep playoff run.

The one thing Islanders fans can be assured of is, whatever decision Lamoriello makes will be in the best interests of all involved, as he sees fit. And given the past debacles they’ve had to endure, a newfound trust in the organization should already be earned based on the results to date.