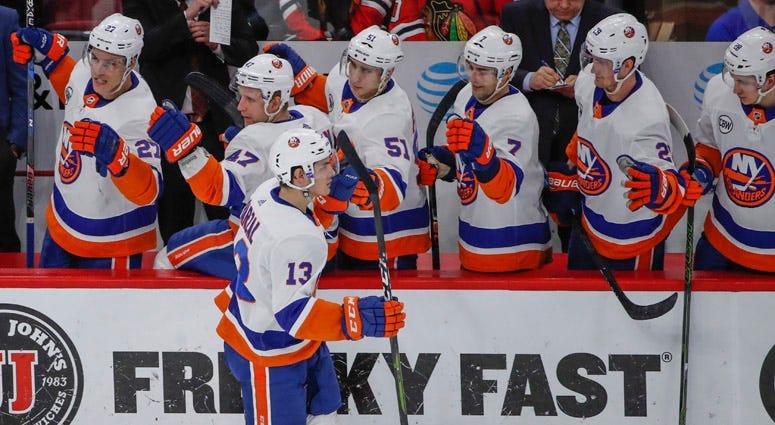 The New York Islanders will resume play after the All-Star Game and league-mandated bye week on Friday when they take on the Tampa Bay Lightning at Nassau Coliseum. It is the front end of a home back-to-back, as the Los Angeles Kings invade Long Island the following night. Not exactly a relaxing way to end your vacation.

When the players take the ice for practice Thursday, some will have returned from relaxing in the Caribbean, others preferring to spend quality time at home with the family, while another, second-year sensation Mathew Barzal, will be back from wowing his peers at the All-Star showcase in San Jose, drawing plenty of compliments from one of the game’s best, Sidney Crosby.

The Islanders will also begin to wind down a ridiculous two-arena schedule as the final "home" games at Brooklyn’s Barclays Center take place Feb. 9 (Colorado), Feb. 10 (Minnesota) and Feb. 16 (Edmonton). All games from that point on will be at the old but "new" barn on Hempstead Turnpike.

The Isles begin play looking down from a perch they have not been accustomed to, that being first place in the Metropolitan Division. Team president Lou Lamoriello and coach Barry Trotz have led their team to a 29-15-5 mark and with 33 games remaining. The Islanders only have to play slightly above .500 the rest of the way to ensure a playoff spot. If the team goes, let’s say, 16-15-2, it would finish with 97 points, which by historical standards, should be enough to qualify.

What I say, though, is forget that. Islanders fans have, for so long, been so used to mediocrity they have conditioned themselves to expect the worst and hope for the best. Trotz should have turned that old way of thinking upside down at this point. The easy front-runner for the Jack Adams Award as the league’s top coach, Trotz has his team playing inspired, defense-first hockey that should have fans excited and expecting the best out of this bunch, who are playing like a true team -- for each other, not interested in individual accomplishments or milestones.

Not that things have been all peaches and cream, mind you. This team is far from perfect, although, to be fair, which NHL team can claim to be? The special teams are flawed, especially the power play, and the team can use more of an offensive spark from its third line. The Islanders still have an unusually high PDO (measure of shooting percentage plus save percentage) that have some thinking they will crash down to earth and bring a losing streak with it.

They have a first-line winger, Anthony Beauvillier, who has one goal in his past 16 games and there are questions about where Thomas Hickey and Andrew Ladd fit when they return from injury. Oh, and there's goaltender Robin Lehner, who has beaten major personal demons to put up the best season of his career to date, leading the league with a 2.02 goals-against average and .931 save percentage. Will it continue? For New York to have any chance of being this year’s Golden Knights, it absolutely must.

So, what can the Islanders do to stay ahead of the pack and continue their remarkable transformation?

Cries of "Scott Gomez must go" permeate throughout Islanders social media every game that New York fails on opportunities to put teams away or drops points due to two power-play units that are failing 83 percent of the time (league average is 80). Gomez is one of the team's assistant coaches. Can they win playing so substandard when up a man? Maybe, but history is not on their side. When the stakes rise in the playoffs and advantages become harder to come by is when you need those goals the most. It has too often sapped energy and momentum. The penalty kill is also just below league average.

Now, I didn’t stay at a Holiday Inn Express last night and have never been close to being a coach at the pro level; however, it seems there simply is not enough movement and interchanging in the Islanders' power play. When you watch them play teams like the Pittsburgh Penguins or Washington Capitals, it really stands out as the defining failure of the five-man unit. On some instances, the Islanders have moved to perfection, yet on others they have been bafflingly stagnant and still. The inconsistency has cost them points already. I know Gomez isn’t screaming at them to not move, so the fix is about as head-scratching as the problem.

Scour The Trade Market For Some Depth

When Hickey went down, there was Devon Toews to step in. If another injury should befall an Islanders blueliner, Luca Sbisa, who has been pretty good in limited action, could step in. Sebastian Aho would be the first recall from Bridgeport. Dennis Seidenberg still practices with the team. At the forward position, it becomes much murkier.

Michael Dal Colle has fit in admirably on the third unit with Leo Komarov and Valtteri Filppula, but the line has not produced much in the way of offensive chances. You can never really count on the best fourth line in hockey to put many pucks in the net, as goals seem to come in spurts then disappear for weeks. Kieffer Bellows is still developing with the Sound Tigers and doesn’t seem ready for NHL action. Josh Ho-Sang is, well, still Josh Ho-Sang. Otto Koivula just found his game and would be best suited continuing to ride the hot hand where he is right now.

I wouldn’t expect much in the way of a major deal from Lamoriello, due to prices being ridiculously expensive and New York not dealing from a position of wealth in the depth department. St. Louis is looking to make a run, taking Vladimir Tarasenko effectively off the market, Columbus, I wouldn't think, is trading its best forward, Artemi Panarin, to a division rival during a playoff chase. And the Flyers will use the same division-rival excuse with Wayne Simmonds.

Monday, the Toronto Maple Leafs picked up 29-year-old defenseman Jake Muzzin, with one year left on his deal and a $4 million average annual value. It cost them their 2016 second-round selection, their 2018 second-round selection and their first-rounder from this year. I still think Anders Lee and Brock Nelson will be signing new deals when all is said and done, leaving only Jordan Eberle as a potential trade chip from the current NHL stock. If you’re not moving Noah Dobson, Oliver Wahlstrom, Toews or Bellows, you see the predicament Lamoriello is in when it comes to making a major move.

But, they certainly could use a depth defenseman or a more offensively proven winger to put on the third line.

Lamoriello has been known to surprise, so by no means is what I am writing gospel. It’s only one man’s opinion. At the end of the day, Lamoriello always has the final say. Always.