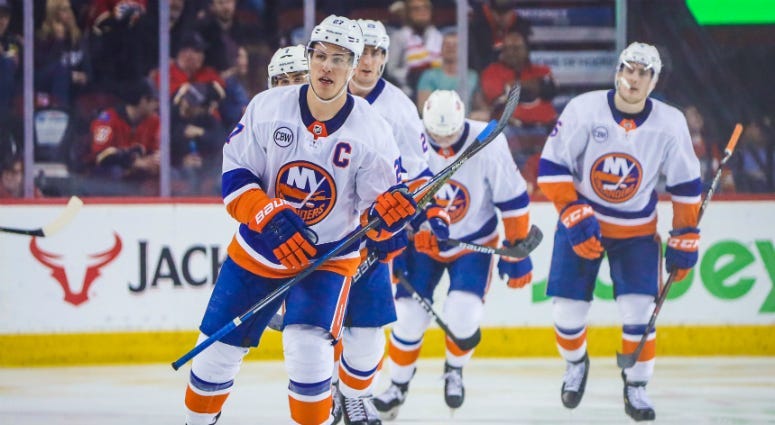 How remarkable of a season is this for head coach Barry Trotz and the New York Islanders? With 23 games remaining in the regular season, if they can put together a record of 14-8-1, they would finish with 105 points, which would be their highest total achieved since 1982, the year the team won their third consecutive Stanley Cup championship. They have only surpassed 100 points twice since 1984 (2015 and 2016 under Jack Capuano). Even if they don't hit that mark, the transformation is very real.

During this incredible year, in which they have gone from worst to first in team defense with an entirely new attitude and renewed commitment, it begs the question that we posed last week on these very pages. Do they go for it? Should they make a big trade and weaken a farm system that is not all that stacked? Or should the team hold tight with the philosophy of ‘what got you here’ and hope good fortune continues to shine upon them?

Over the course of the last week, prices have begun to leak to give hints as to what some of the top players ‘available’ at this year’s trade deadline might cost. At the moment, those prices seem very expensive, sort of like when flat screen television sets first hit the market.

MORE: Graziano: To Trade Or Not To Trade? That Is The Question For Islanders

Columbus is said to be considering moving Artemi Panarin (which I still think doesn’t happen, but that’s just my opinion), Ottawa will move Matt Duchene and might have to move Mark Stone as well if he doesn’t agree to what is rumored to be a very lucrative extension offer from owner Eugene Melnyk. Wayne Simmonds could be had for the right price from the Flyers, and Kevin Hayes and Mats Zuccarello make up the best of what the rebuilding Rangers are offering.

All of those players could help inject some life into an Islanders offense, that has averaged 2.46 goals per game over their last 15, and a powerplay that is malfunctioning at 16%. But with the cost said to be a young NHL-ready player, a top prospect and a first-round pick in this year’s draft, is it worth it? Especially with Panarin, Duchene, Stone, Simmonds, Hayes and Zuccarello all due to become unrestricted free agents on July 1.

From an Islanders perspective, a package that ticks all those boxes might look like Anthony Beauvillier, Oliver Wahlstrom and a first. When I polled Twitter on that very proposal Tuesday night in a deal for Duchene, for example, with over 1,000 votes, 60 percent of respondents said they would NOT do the deal. Are the Islanders really one player away from being a legitimate Stanley Cup contender? Some say yes, others say no.

It’s going to be a hectic couple of days for sure. Be sure to keep a sharp eye for fake accounts and remember, it’s almost impossible for even the ‘experts’ to pin down trade speculation before it actually happens, as the market is fluid and changes seemingly minute to minute. From the looks of my social media poll, Islanders fans might not be too disappointed if general manager Lou Lamoriello decides that Louis Vuitton is too rich for his blood and drives over to Walmart to see what they have for sale. Or, he may just stay home altogether.

The Islanders had some trouble with the speedy Calgary Flames last night in their 4-2 loss to open up a three-game road trip. They only had seven shots on goal through two periods and had to figure themselves lucky to be tied 2-2 early in the third on Anders Lee's 20th goal of the season. The cries for offensive help will only get louder now, and what they do in their final two games before the deadline, tonight in Edmonton and Saturday in Vancouver, could play a huge part in which impulse Lamoriello actually decides to act on.

Could it be that the players they have just need to... I don't know....produce? Mathew Barzal, since the all-star break and league-mandated bye, has 3-2-5 in 10 games. Anthony Beauvillier has a single goal in his past 16 games and only three in his past 27. Brock Nelson is still playing very competent two-way hockey, but has two goals in his past 15 skates. And Jordan Eberle is right there for the ride, with two goals in his past 13. Even the captain, Anders Lee, went 11 without a goal before notching one in his past two games.

It gets late real early and the Islanders need the players they have to start living up to their pedigree. Is Andrew Ladd the answer? You could see him replace Beauvillier or Kuhnackl as early as tonight. Trotz gave his team an emphatic 'F' for last night's performance, saying "We had too many passengers. We weren't emotionally and physically engaged."

So far, in 2018-19, the Islanders have bounced back from losses very effectively, losing more than two games in a row only once. They have not lost consecutive games in regulation since December 4-6 (3-1 vs Jets, 6-2 vs Pens).