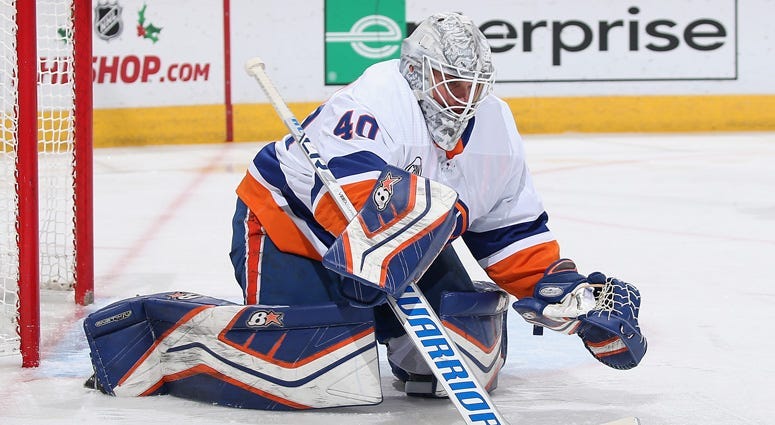 You’ve heard it before: Good defense will always beat good offense. It’s true not only in hockey but in all sports. A solid structure, paired with discipline and desire, is tough to break down and figure out. Most of us sitting back on our couches think it’s easy. "Do this. Do that. Pass here," we shout. If only it were that easy.

Coach Barry Trotz not only brought his Stanley Cup ring with him to Nassau County, but also a defensive structure that has taken hold of his Islanders, resulting in an incredible turnaround from last season’s winter blockbuster feature, "The debacle on the blue line."

After allowing a league-high 296 goals in 2017-18 (3.61 per game), Trotz has led a ragtag but hardworking bunch of Nick Leddy, Johnny Boychuk, Ryan Pulock, Scott Mayfield, Thomas Hickey and Adam Pelech to the tune of 93 goals allowed in their first 33 games (2.82 per game). Only three teams in the entire league (Nashville with 88, Boston with 88 and Arizona with 92) have allowed fewer, and New York is seventh in goals allowed per game.

As you dive into the numbers deeper, it becomes even more remarkable what Trotz and his coaching staff have been able to accomplish in such a short time. You knew they were going to sacrifice offense, not only due to the departure of John Tavares, but it’s a necessary evil when converting to a more defensive style of play. Last year, through 33 games, New York was averaging 3.58 goals per game. That has dropped to 2.91.

Director of Goaltending Mitch Korn and goaltending coach Piero Greco have come in, worked with Trotz and led Thomas Greiss and Robin Lehner to the sixth-best save percentage (.912) in the NHL. In 2017-18, New York allowed fewer than three goals in a game 18 times and allowed five or more an incredible 22 times. This season? Already 15 games allowing fewer than three and only four instances of five or more allowed.

With Leddy and Pelech struggling to get on board with the new system, Boychuk and Pulock have picked up the slack alongside, arguably, the defensive MVP of the first third of a season, Scott Mayfield. Hickey was performing admirably before suffering what is believed to be a concussion Monday night in Colorado.

In Tuesday night’s 3-1 victory over the Arizona Coyotes, the Islanders' second straight win to open up a four-game trip, the team was gassed in the third period after playing three contests in four nights and traveling across the country. Down a regular in Hickey, with Luca Sbisa dressing for the first time in a month, the forwards picked up the slack and back-checked with vigor, collapsing in front of Lehner and helping close out a speedy Coyotes team pressing to steal a point at home.

It’s a game that many could look back on and expect different results had this not been a Trotz-led team playing to his strength. Pessimists will tell you that New York is essentially no better than a .500 team with a record of 17-12-4 (they’ll argue its 17-16). Heck, even last year, under Doug Weight, the team was 18-12-3 through 33 games. But this is the NHL. And the NHL, right or wrong, like it or not, gives away a point for losing in overtime or a shootout. Are you going to give those four points back? The team surely isn’t.

It’s 3.58/3.45 vs 2.90/2.82 that are the important numbers here. The goals for per game/goals against per game splits from 2017-18 to 2018-19. It spells defense. It spells structure. It spells discipline. And you know what? Trotz and general manager Lou Lamoriello aren’t even halfway done remaking the Islanders in their image. This season was supposed to be a write-off season, an adjustment period. The past three games and the trend year to date have the fan base thinking bigger.

As they say, all you have to do is earn a ticket to the dance. After that, anything can happen.

Ho-Sang Gets His Chance

Josh Ho-Sang was finally able to break into Trotz’s lineup Saturday night, helping New York to a 4-3 shootout win over the Detroit Red Wings at Nassau Coliseum. He played disciplined, responsible and headstrong over a 12:24 "audition," skating with Valtteri Filppula and Leo Komarov. It earned the 6-foot eccentric winger another shot in Colorado, where, once again, he provided a jolt to an offensively challenged line across another 12 minutes.

Fast forward to Tuesday night in Arizona when Ho-Sang shined. Once again, driving possession, scoring the team’s first goal with acute awareness and playing with a controlled pace that had Ho-Sang in the coach’s good graces during the postgame interview with MSG's Shannon Hogan, after a solid 15:06 of work.

For the advanced stataholics out there, what’s more impressive is Ho-Sang, playing with Filppula and Komarov -- not exactly two offensive powerhouses -- has a 62.7 percent 5v5 Corsi through three games (37-22), even with 76.5% of his "starts" being in the defensive zone.

For now, at least, the Islanders look to be better, fairly significantly, with him in the lineup. Let’s hope it stays that way.