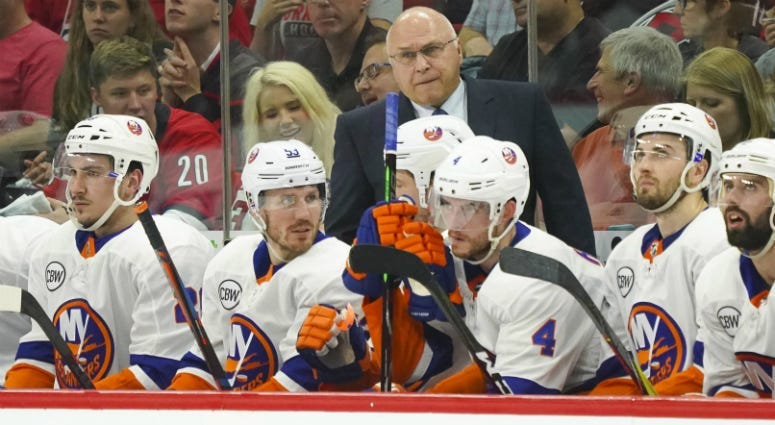 The NFL season kicks off Thursday evening and that can only mean one thing: hockey is right around the corner.

Rookies are expected in camp over the weekend with veterans to follow a week later as the curtain will be unveiled on the 2019-20 season, one that might be the final one before an assumed lockout hits the league next summer. Of course, that all depends on the NHLPA, which has the ball in its court regarding the current collective bargaining agreement. Should they choose to keep the status quo, the deal will run to 2022. Should they opt-out, it expires in May 2020.

For now, the Islanders will enter camp with only a few minor tweaks to a roster that some feel overachieved last year, given their well-documented goal-scoring woes. They played outstanding team defense in a worst-to-first turnaround, picking up a Jennings trophy and Vezina nomination in the process.

Mathew Barzal, in the final year of his entry-level rookie contract, will once again be the talisman, and captain Anders Lee and wingman Jordan Eberle return to form what should be a formidable first-line. It’s what lies behind that is the issue.

Head coach Barry Trotz, in speaking to NHL.com earlier this week, suggested there are openings in camp for young players to prove their worth. With Andrew Ladd not expected to be ready to start the season and Cal Clutterbuck a question mark, even though the forward's offseason back surgery went better than many expected, there appears to be one, maybe two openings to start the season.

But that doesn’t necessarily mean those players stick around once the aforementioned two are healthy. Michael Dal Colle, off an impressive analytical performance last year, seems ticketed for the third-line, although I still think he’s capable of much more offense if only given a chance. The door appears open at the start for mercurial Joshua Ho-Sang, Oliver Wahlstrom and Kieffer Bellows.

And wait, please hold all tickets until results are in. This is all dependent on team president and general manager Lou Lamoriello not being able to swing a deal for what the team really needs, a bona-fide sniper. The restricted free agent market is still in lockdown, which is holding up the trade market. Three Eastern Conference teams are said to be speaking to the Winnipeg Jets about Patrick Laine, although its unknown at this time who those specific teams might be.

With Barzal, Ryan Pulock and Devon Toews all due contracts next summer, how much does a guy like Laine command? Any math wizards in the house? Call Lou right away to figure out how to dance around that equation.

It’s certainly possible. It’s absolutely needed. While Laine undoubtedly struggles in the defensive aspect of the game, he is the triggerman this offense so sorely needs. Can the Islanders pull it off? Some might say it would be a miracle.