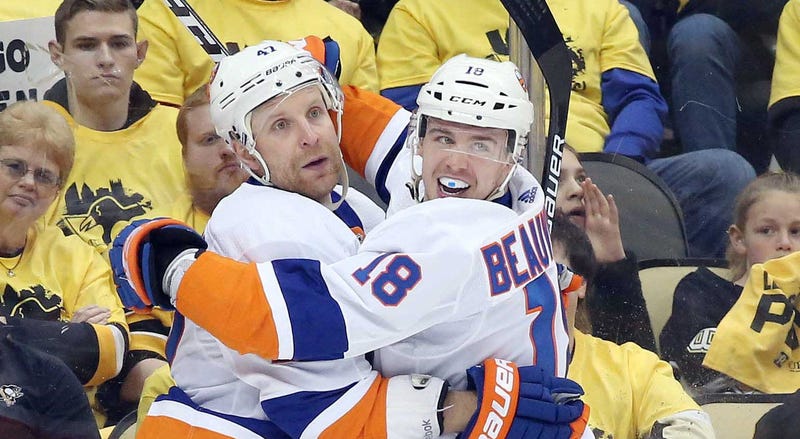 We have heard the narratives being pushed all season long. And that was just some of them. Last night, for the first time since 1983, the New York Islanders pushed away all the talk. Pushed away all the predictions, ones that came way back in October and ones that came just a week ago. They defeated the Pittsburgh Penguins 3-1 at PPG Paints Arena to cap off an impressive four-game sweep of their first-round NHL playoff series.

As captain Anders Lee said in his Twitter recap to fans, ‘Just out here proving people wrong’ as he introduced Matt Martin, who will take over social media connectivity for the second round. Under ludicrously good head coach Jack Adams – oops, I mean Barry Trotz – the Islanders came together as a team more than ever once the puck dropped on the 2019 postseason. They didn’t play as individuals but as a collective 23-man unit.

In becoming the first team in 100 years to go from worst to first in goals against, the Islanders did not stray from the formula that won them 48 games in the regular season. They suffocated and frustrated the Penguins, holding them to six total goals and marking superstar Sidney Crosby so tight that he ended up with a single assist in the entire series. They allowed three goals in the final three games after an emotional game one win in overtime and held a powerful Penguins power play to a single game one tally on 11 chances.

Unrestricted free agent to be Jordan Eberle, after scoring only 19 goals in the regular season, exploded for 4-2-6 on 15 shots to lead New York’s offense. And they were big goals too. Every time the Penguins would score, New York would come right back. (Pittsburgh held the lead for less than five minutes over four games.) The Islanders showed the poise, confidence and maturity of a team playing well beyond their playoff years. Josh Bailey had three goals, including two Johnny-on-the-spot tallies. Mathew Barzal had five assists, Valtteri Filppula had four. Brock Nelson continued running for Trotz campaign manager with three goals, all of them in crucial bounce-back spots.

The defense didn’t notch a goal, but my goodness, what a lock-down job on primary task one they all did. It was a coming out party for Devon Toews, who could be an all-star before long and Ryan Pulock continued his meteoric rise. Scott Mayfield was the only Islander that didn’t have a strong series, as he struggled with the Penguins’ forecheck and speed at times, but he did make a huge sliding block last night with the game 2-1 that could have turned momentum fully in the home teams favor.

Robin Lehner, who had a .930 save percentage in the regular season and will share the Jennings award with Thomas Greiss, made save after save. The ones he had to and the ones you didn’t think he could. He finished the series with a .956 save percentage. And keep in mind, think what you want of the Penguins this morning, this is a team stacked with offensive talent. Crosby, Evgeni Malkin, Phil Kessel, Jake Guentzel, Kris Letang, Patric Hornqvist. Lehner and the defense in front of him shut them down. All of them. Collectively.

New York had more high-danger scoring chances (in all situations) in the series (57-46) and more importantly, they converted on eight to Pittsburgh’s one. So even though they conceded possession (54-46 Corsi, 56-44 5v5), they kept dangerous players from making dangerous plays. And that is the Barry Trotz way. The Barry Trotz system. Played to perfection.

“They scored early. We kept our composure. Our quick response was key and allowed us to settle in. That was huge for us. Our penalty kill was outstanding and when all else failed, Robin was fantastic. What a group effort and I wouldn’t expect anything less from this team,” Trotz said post-game.

The Islanders will now get a chance to rest and recuperate, especially with Johnny Boychuk and Cal Clutterbuck getting banged up last night, and await the completion of the series between the Washington Capitals and Carolina Hurricanes to decide their next opponent. The Islanders will hold home-ice advantage if the Hurricanes advance with the playoffs now shifting to Barclays Center in Brooklyn. Not where the Islanders would prefer to play, but an NHL decision based on revenue potential.

If you’re left with anything today, think about this. The Islanders, and team president and general manager Lou Lamoriello, face many challenging decisions this summer. There is a good chance the roster looks different come September. We know he was aggressive at the deadline in pursuing Mark Stone and Matt Duchene. There are a couple of big fish floating around come July 1. There are decisions to be made on Eberle, Lee, Nelson, Filppula and Lehner.

As much as the Islanders might be playing with ‘house money’ this year, that money is green all the same. Ask the Vegas Knights of 2017-18. Once this remarkable, fun ride comes to an end, there is a chance for the Islanders to be….even better.