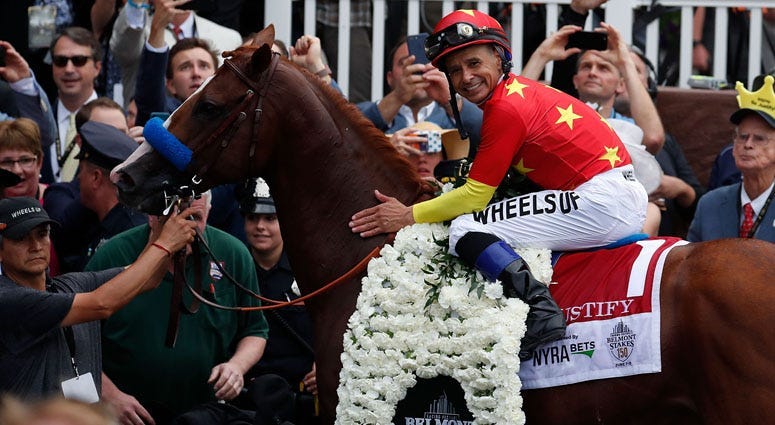 “I think he’s the greatest of all time,” jockey Mike Smith, 52, said about Justify.

After a sun-filled day of races, an ominous cloud cover settled over Belmont Park right as Justify and the rest of the field entered the starting gate, setting the drama for the 90,327 people in attendance.

Concern over Justify’s No. 1 position was eliminated right away, as Smith recalled the start.

“The gates were set off away from the fence a little bit," he said. "He jumped to the left, but he jumped very fast to the left.”

Smith, who kept looking at the replay of his own performance while fielding questions from the media, admitted that he was worried about how calm Justify stood in the gate.

“He was standing so good, almost too good,” Smith revealed.

But Smith confirmed that Justify “broke better today” than in the Kentucky Derby and Preakness.

Smith was calm and confident before and during the race, so much so that he told a story about how Baffert told him the night before that if he had to whip Justify at the top of the stretch that they’d be in trouble.

“I swear I thought of that, I did,” Smith said when he turned for the home stretch.

Victor Espinoza — the jockey who won at Belmont atop American Pharoah in 2015 — didn’t race in the Belmont Stakes, but said it’s never too soon to have another Triple Crown in the sport.

“It always helps," he said.

Yet while happy for Smith -- a close friend -- Espinoza couldn’t help but remain biased.

“They’re two amazing horses, but I have to say American Pharoah is better," he said.

Smith, who ran in the No. 1 post for the first time in his career at Belmont, chuckled at Espinoza’s comment, noting that he has to say that about his horse. But Smith confessed that Espinoza’s Triple Crown journey three years ago actually helped him Saturday.

“I was so happy for him when he won,” said Smith. “I learned a lot by watching him and how he handled everything, and how he just took it one race at a time. I took that same approach.”

For trainer Bob Baffert, this is his second Triple Crown victory overall, and second in the past four years.

“It’s a privilege to have a horse like this,” Baffert said about Justify. “We’re like the coach, but they’re the athletes, and the jockeys get it done.”

Adding to Baffert’s sentiment was Elliot Walden, CEO of WinStar Farm, one of Justify’s owners.

“A horse like this just kind of happens,” Walden said, as he tried to describe the genesis of what Justify accomplished Saturday. “You can’t find horses like this; they find you."

Walden, however, declined to answer any questions regarding Justify’s impending breeding rights.

The future may be unknown or undetermined for Justify, but Baffert wasn’t ready to stop glowing about what transpired Saturday.

“He just came on there, and he broke every curse there was," he said. "It was meant to be. You know, I was meant to get this horse. They were meant to buy him (pointing to the four ownership groups around him). Everything is meant to be.”