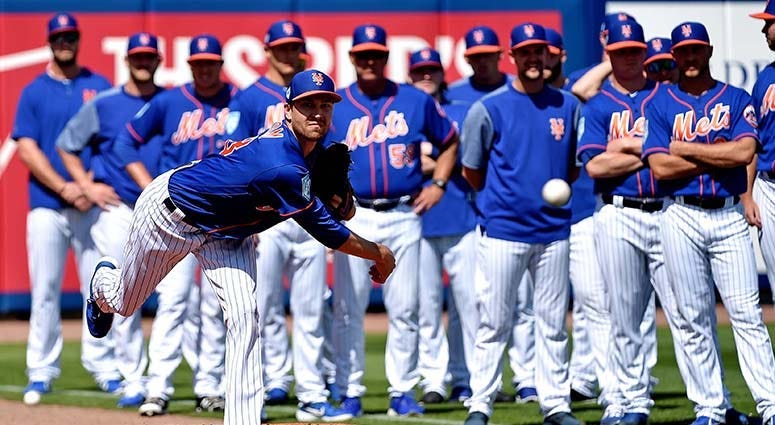 For aficionados of great pitching matchups, you probably can't do any better than the Mets season opening series with the Nationals in Washington  -  DeGrom vs. Scherzer, followed by Syndergaard vs. Strasburg, followed by Wheeler vs. Corbin. Not too shabby. But for those of you who can't wait, you needed to be back on Field 7 in Port St. Lucie on Monday for Jake vs. Noah, the Mets keeping it in house in a minor league game as two of their aces went through their final major tuneup for the start of the 2019 season.

The Mets played Washington back-to-back on Sunday and Monday, and manager Mickey Callaway didn't want to give the Nationals any free looks at DeGrom and Syndergaard so close to the beginning of the season next week. There was a larger crowd than usual on the back fields for this event, many fans, curious Met minor leaguers anxious to watch the big boys up close and personal, and most of the Met executives and front office personnel, including David Wright, who had just arrived that morning. But DeGrom thought it was the perfect setting for what he wanted to accomplish.

"You know, you get in front of a crowd in a stadium, you kind of focus on the results a little more than the process. So I think today I was really able to focus on where I wanted to throw my pitches and not really worry about the outcome. Just make sure I was throwing quality off speed pitches today."

That was the goal for DeGrom on Monday, nail down the off speed repertoire, and he felt his killer changeup was really good, and his slider was definitely closer to where he wants it to be.

"The last time out, I felt like I was flying open a little bit, and just being able to focus on the process back there, where, you know, I threw one changeup that I really didn't like, and just, right away, back to it.  If I threw a slider where I didn't want it, throw it right away again.  So I was able to get more work I think then I even expected."

MORE: Pressure Is On Mickey Callaway To Produce Results After Mets' Busy Offseason

DeGrom gave up 7 hits in all over 6 1/3 innings, but the only really hard hit ball was a double by young stud SS Ronny Mauricio. He allowed one run, struck out 12, as usual walked no one and threw 96 pitches. The good news is that his stuff was still playing well late in the game, a great sign with the season around the corner.

"I actually felt better later on than when I first started the game.  That's definitely a plus, and I felt like I could've kept going, and Dave (Eiland) at the end said "that was 96 pitches" and I really didn't feel like it was that many."

DeGrom was asked about possibly pressing to try and replicate his Cy Young performance of last season, and his answer should probably put to rest any doubts about how competitive he is when he toes the rubber.

"Well, that was last year.  This is a new year and I have to figure out a way to get guys out. I think that's my mindset. One pitch at a time. What happened in the past, that's over with. I'm very proud of last year and being able to win that award. But this is a new year, and I think I'll be able to block that out."

Syndergaard was hit around a little more, but also struck out 12 while walking two over 6 innings of work and 99 pitches. He surrendered 5 hits, including back-to-back homers by Andres Gimenez and Wilson Ramos, and allowed 4 runs. Syndergaard looked sharp for the most part, and was also working on his off speed pitches.

"My curve ball, it has more action, it's less slurvey this year.  The slider, I'm still getting a feel for that pitch. Threw some really good ones today, just didn't throw a lot of them."

Both pitchers will be in the 50-60 pitch range the next time out in their final appearances of the spring. But this was a productive, and encouraging, exercise as a final run through for the start of the season.  And a fun way to watch two aces, albeit from the same team, go at each other.