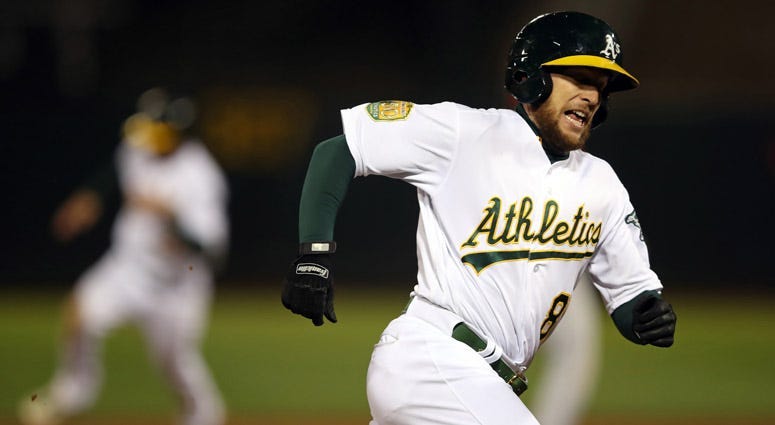 In an offseason that has seen them steadily fortify their roster, the Mets unveiled their newest "depth" piece Wednesday -- versatile infielder Jed Lowrie. But Lowrie did not come here as a veteran utility piece, not at $10 million per year for two years. As a proficient switch hitter, he's here to bring balance and length to the Mets' lineup and may be the perfect No. 2 hitter to sandwich between Brandon Nimmo and Robinson Cano on most nights.

Lowrie said he is excited to get back together with new Mets hitting coach Chili Davis, with whom he has prior history. "We just connected on so many levels," he said.

The former Oakland Athletic primarily played second base the last few seasons, but that's not happening with the Mets. Lowrie will occasionally play there -- and also be the primary backup for Amed Rosario at shortstop -- but it appears the bulk of his time will be logged at third base.

MORE: Jed Lowrie: Mets' Other Acquisitions Made Me Want To Join

So what does that mean for Todd Frazier? General manager Brodie Van Wagenen was asked how much first base Frazier will play assuming Lowrie is the primary third baseman. Van Wagenen said that Frazier has been kept in the loop all along and that it will depend on his health and the performance of the young guys, meaning Peter Alonso and J.D. Davis, and how quickly they come along this spring and during the season. Both Alonso and Davis have options available, so that gives the Mets some flexibility.

It appears the Mets have their five outfielders at the moment, and the group doesn't include Bryce Harper, A.J. Pollock or Yoenis Cespedes for that matter. Van Wagenen said he feels secure defensively because four of the five (Nimmo, Michael Conforto, Juan Lagares and Keon Broxton) have all seen plenty of playing time in center field. The fifth -- Jeff McNeill -- will be logging significant time in the corners this spring and staying after school for extra work as well. It's interesting that McNeill has gone from second base to third base to now the outfield with all the roster shuffling the Mets have done since the end of the season. But McNeill has a bat that you want in the lineup as much as possible, so his versatility has to be pushed.

As for adding a Harper, Pollock or Manny Machado in a possibly shrinking market, don't hold your breath. Van Wagenen had this to say: "I'm a player lover at heart, so I will always keep an eye on good players and see what happens. But I've never operated this offseason to wait and see if a market dropped. All of our moves have not really been market contingent. They've been on our roster contingency, and how do these players fit and can we acquire them within the constraints of our plan? That's what we've done so far, and I think we'll continue to look at the roster in that way."

MORE: Grandal Explains Why He Turned Down Mets' Offer

Meanwhile, Van Wagenen was pleased that Jacob deGrom was well compensated for his historic year, saying that a player of his talent with the season that he had deserved the highest raise in the history of salary arbitration. As for a long-term contract for the Cy Young Award winner? "Hopefully the arbitration discussions will lead to future discussions of the same tone with the same goal in mind -- that Jake can be part of what we're doing here beyond 2019."

The Mets' GM, of course, was also asked about his famous (infamous?) remark about his club being the team to beat in the National League East, and he didn't exactly back down.

"If I thought we could contend the last time that question was asked, I haven't softened my approach," he said. "I think we're a good team. I think we're a complete team. I think we're a balanced team. We've got veterans, we've got youth. We've got a hunger and desire to win. And I look forward to showing people that we're a team to be reckoned with. Let's not be shy about wanting to be the best, and I fully expect us to be a winning team. Our goal is to win a championship, and it starts with the division. Come get us."

Whoa! Throw down that gauntlet!