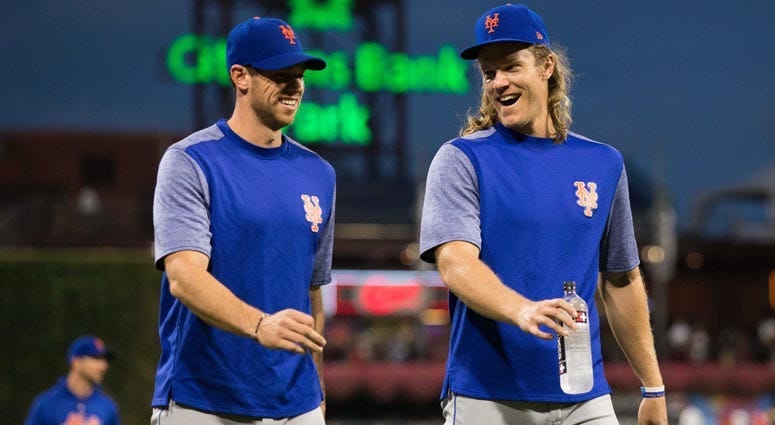 Give Brodie Van Wagenen a solid "B" thus far in his reshaping of the Mets.

The new general manager delivered a 24-year-old closer (Edwin Diaz), a veteran second baseman (Robinson Cano), a much-needed catcher (Wilson Ramos) and an oldie-but-goodie back-end bullpen piece (Jeurys Familia). The moves should also free up Jeff McNeil to be a useful, versatile jack of all trades for the lineup.

It doesn't look like free agent center fielder A.J. Pollock will be coming here, and another high-end reliever is unlikely for the bullpen.  An outfield bat and reinforcement in relief still remain as needs for this club, though, as well as a backup infielder. But the Mets can't ignore another need, and that is rotation depth behind their five starters should injuries, as they always seem to, especially with this team, crop up.

I'm of the opinion that Jason Vargas is certainly adequate as a fifth starter if the front four (Jacob deGrom, Noah Syndergaard, Zack Wheeler and Steven Matz) all remain healthy to give the Mets 28 to 33 starts. But that has been and might be a big "if."  Right now, if you keep Seth Lugo and Robert Gsellman in the pen as you should, beyond Corey Oswalt, no one jumps out as a depth piece.

Last season, the Oakland A's got 17 mostly solid starts (6-3, 3.33 ERA) from Edwin Jackson. Likewise, the Washington Nationals received 19 starts (5-3, 3.45 ERA) from Jeremy Hellickson. They both ably filled a void when needed.  Both are still available.  Both cost in the $2 million range last year. Cost-efficient options such as Clayton Richard and Jordan Lyles have already been scooped up. Now I'm not debating the worth or quality of any of these pitchers. I'm just saying that when injuries occur, having veteran arms to plug in can be worth its weight in gold.

There seem to be some bargains still available out there as well. Francisco Liriano ($4 million last season) made 26 starts for Detroit in 2018 and can also relieve. Another lefty who can do both is Hector Santiago ($2 million), who pitched for the White Sox last year. Josh Tomlin ($3 million) is out there.  And there are a couple of pitchers with recent injury histories, Miguel Gonzalez ($4.75 million) and Martin Perez ($6 million), who could at least be considered if healthy.

There's still work to be done, and Van Wagenen knows it as well. And there are more pressing needs probably at the moment. But just don't ignore rotation depth. It may turn around later and cost you a lot more than money.