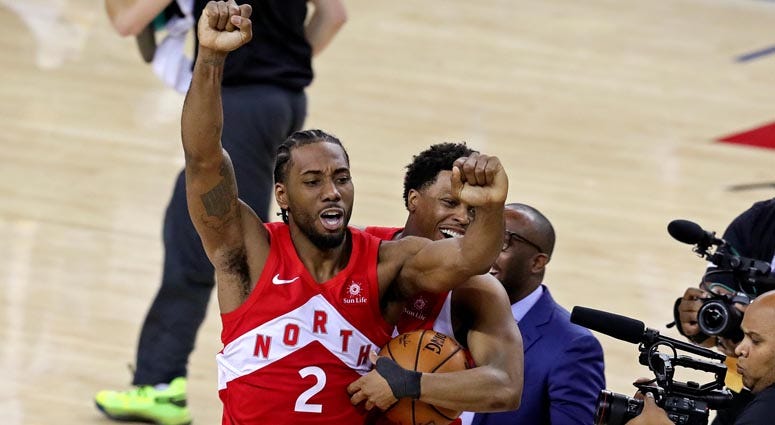 Funny how fortunes change in life, and sports.

Durant snapped his Achilles, Klay Thompson tore his ACL, and the Warriors got bounced by the Toronto Raptors, who now have the best player in basketball. And after the Warriors, perhaps the team most battered by these events is the New York Knicks.

Two weeks ago, the Knicks were frontrunners for Durant's talent, wingspan and pedigree. Even better, he was going to team up with another big-ticket free agent, either Kyrie Irving or Kemba Walker or Jimmy Butler. Now, with a suddenly barren free-agent landscape, the Knicks have to try to pry Kawhi Leonard away from Toronto right after he led the Raptors to the NBA title, right after he won MVP of the NBA Finals, right after he had the time of his life doing it.
Pool Photo/USA TODAY Images

He was also pretty darn good. During the regular season, Leonard averaged 26.6 points per game, 7.3 rebounds and 3.3 assists. Then he found his playoff cape, averaging 30.5 points, 9.1 rebounds and 3.9 assists during the four rounds that led to Toronto's first NBA championship.

Right after a team wins a title, the rest of the sport circles like buzzards around their franchise, ready to poach players and management, hoping to borrow the magic that led to their success. And Leonard is the biggest catch of the offseason. He has a $21.3 million player option for 2019-20, which he will likely decline for something more lucrative. Most of Toronto's team is intact for at least one more year, so there's speculation that Leonard could sign a one-plus-one deal, locking him down for next year and giving him an option for a second season. He's only 28 and could still sign a megadeal at the end of this one.

Now is the only chance the Knicks have to make a play for Leonard. They have the most cap space ($72.6 million) and are still selling the allure of Madison Square Garden and the whiplash excitement of New York City.

It will be a tough sell. With Durant, it made sense. He was labeled as someone who hopped on the Warriors' bandwagon and rode it to a pair of championships. He wanted to fan out and start his own thing and plant his flag as an all-time great by winning with a forlorn franchise. Likewise, Irving is from West Orange, New Jersey, and would have all the friendly trappings of home in Manhattan. But Leonard looks happy in Toronto, a hardwood enclave in Canada, without the drama and army of media that he will find in the Big Apple.

Leonard doesn't have the same sensibilities of the modern NBA player, who is all about branding and social media and living chest-out at all times. He is quiet, humble and the rare, team-first superstar. He doesn't need to live in an echo chamber of yes men. Not to mention, Toronto can offer him more money than the Knicks.

With Durant unable to play next year, and Irving still leaning heavily toward Brooklyn, the Knicks would have to find a stud to pair with Leonard and somehow tap into his modest mien in a city that trades on money, commerce and arrogance. It would be hard, if not impossible, for Leonard to find the low-key regularity in Gotham that he clearly cherishes in Canada.

Leonard has already proved he can win with different squads, having now won an NBA Finals MVP with the Spurs and the Raptors. The Knicks could offer him a chance to become the only player in league history to win the award with three different clubs, but Leonard doesn't strike you as someone chasing awards, or attention. The Knicks have to somehow hope that Leonard sees some form of stagnation in keeping the same team in Toronto and the team-wide lethargy that often follows a world championship.

Also, the Knicks could benefit from the surreal deal the Washington Wizards reportedly offered Raptors team president Masai Ujiri. According to ESPN's Adrian Wojnarowski, the Wizards are keen on offering Ujiri the same position at $10 million per season with an option for ownership equity. If he takes the deal, then the man who dealt for Leonard and built this stunning title team would be gone, which could tear into Leonard's loyalty.

If the Knicks can swoop in and offer RJ Barrett plus one more max player, perhaps Leonard will be tempted to fly 400 miles southeast to the arena above Penn Station. The Knicks don't have a history of adroit personnel coups. Still, fans have every right to want the Knicks to make a hard charge at Kawhi Leonard. They just don't have a right to expect the Knicks to land Mr. Leonard.