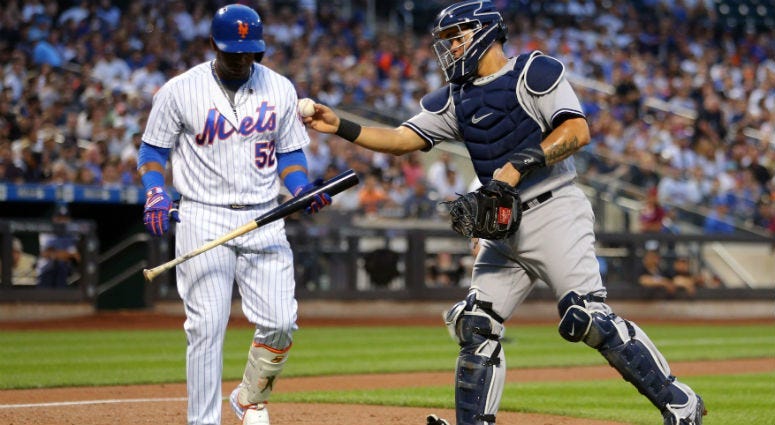 Otherwise you'd have to do some serious mining to find some baseball nuggets worth watching or reporting during this latest iteration of the Subway Series.

The Yanks (62-33) and Mets (39-55) are as far apart currently as they have been historically. The Bronx Bombers would be in first place in any division other than the AL East, where they are looking up at their century-long nemesis, the Boston Red Sox. The Mets have no such tormentors, partly because they haven't been in existence for a century, and largely because they don't hover around first place long enough to have one.

But the Mets always have the Yankees - as a foe, as foil, as forever a reminder that they are the runt of the Big Apple baseball litter. If you lived in a house where mom drew a line in the wall to measure your height, the Yankees would be Wilt Chamberlain, and the Mets would be Mugsy Bogues. Indeed, there may not be a metric to measure the chasm between our local baseball clubs.

Except the Subway Series. Which is why the games still have heft, why you won't see swaths of empty seats, no matter the state of the teams. These three games, starting Friday, are at Yankee Stadium, which means you won't find super-cheap seats or back-room online deals as you would if this set were at Citi Field.

Things are going so well for the Yankees that their idea of bad news is they didn't lose any of their blue-chip prospects in a trade for Manny Machado. The bad news is the Dodgers offered the Orioles so much for the All-Star third baseman that they saved the Yanks from making a bad move, from draining their most fertile farm system for a player whose contract expires in three months.

Absurdly spoiled Yankees fans - the ones who can't name a game or player prior to 1996 - are sweating profusely over this 4.5 game deficit in the AL East, and feel it's their birthright to kidnap any player of Machado's talent every time a pennant isn't guaranteed. When I suggested to said fans that the Yanks should just play a little better than Boston and overtake them the old-fashioned way, I was called a clown. They don't know about the 13-game firewall the Yankees climbed in 1978 to overtake the Sox, and don't care.

The Mets have no such history, nor such hopes. Their best player, Yoenis Cespedes, is so mysterious folks are wondering if he's either injured or human, his limbs and location the topic of daily speculation. Their best pitcher, Jacob deGrom, is getting tired of the incompetence, and has sent his agent as an emissary to get him paid or traded.

They lost one comic book hero, the Dark Knight of Gotham, to a cocktail of injury and incompetence. Their remaining hero, Thor, has been felled by a bum finger.

>>MORE: Boomer & Gio: Sizing Up The Second Half

Basically, the Yankees live for first place, while the Mets are buried in last place, the only NL club with fewer than 40 wins. The Yankees own the back page, the sports page, while the Mets belong on Page Six. But no matter their place in the standings, or in our hearts, they play each other every season because it's fun. For two decades, these games have drained our adrenal gland, the rare time baseball has tweaked the system and it's been a smash hit.