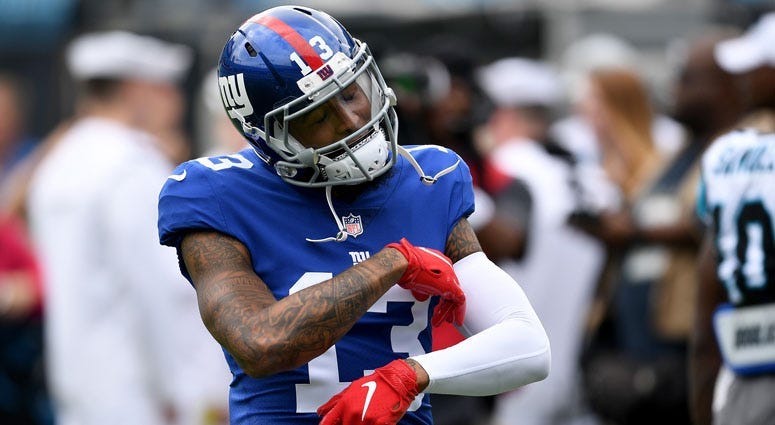 When our favorite team falls apart, we scramble for scapegoats.

At 1-5, the Giants are all but out of playoff contention, an abject iteration of an NFL club. So we look at Big Blue's big names and channel our anger their way, even if there are larger people and problems at hand.

No doubt Odell Beckham Jr. has played a part in this lost season. He had his personal nadir during the spring with those photos of the hotel room with a French model and some suspicious-looking substances. Then he morphed into a boy scout during the summer, just long enough to get paid, and then morphed back into the spastic sideline diva we've seen most Sundays.

Beckham swears his teammates are his singular focus when eyes bubble with tears, when he bangs into kicking nets, when he head-butts a cooling fan and stomps off the field before halftime to get an IV. More likely, Beckham is stacking his brand, all his histrionics coming with his helmet off, so we can see his wild blond mane, his wincing need to win and his tears.

MORE: Eli Manning On 1-5 Season: 'Tough To Go Through This'

It's impossible to see how a misguided interview with Lil Wayne, in which Beckham hurled Eli Manning under the team bus, served his supposed goal of bonding with his gridiron brothers. If you believe the football maxim that the farther a player lines up from the snap, the more eccentric he is, then Odell Beckham Jr. is Exhibit A.

But Beckham is not the problem, just a manifestation of it. When any team unravels, the players on the emotional fringe are the first to act up, and often the first we blame. But Beckham didn't hire coach Pat Shurmur, who has lost his grip on the wheel, allowing the locker room to splinter into fiefdoms and finger-pointing. Beckham didn't build this roster, make cosmetic changes to an offensive line that still hemorrhages defenders at galling rates. Beckham didn't go all-in on Eli Manning, who can't seem to throw a football more than 30 yards. Beckham didn't pass on a franchise quarterback, handing Sam Darnold to the Jets on a platter, thus nudging the sizzle and Big Apple spotlight onto Gang Green for the foreseeable future.

Not to excuse Beckham, who's now the league's highest-paid WR, the millennial face of the franchise and supposedly a leader on a team that needs an infusion of energy and moxie. Just six games into his NFL career, Saquon Barkley is already more mature, more of a leader and the one who whispered calming words into Beckham's right ear while the wideout was in the middle of another sideline outburst. You saw the G-Men's two most gifted players chat, cheek-to-cheek, during Beckham's solemn six catches for 44 yards in their appalling home loss to the Eagles.

But Beckham is only going where he's allowed to go, acting in ways the team clearly tolerates, despite the superficial fine the club pinned on Beckham after his Lil Wayne duet on ESPN. The brass signed Beckham because, no matter his tangents and me-first moments, he's good for business.

MORE: Keidel: Giants Fans Have To Be Sick Of This Circus

Fans fill the seats to see him perform, no matter how distorted his sense of a performance has become. Fans turn on the TV to see his latest soap operatic sideline tirade. Fans wear his jersey because he's relevant in the modern celebrity way. Despite his subdued season on the field, his sagging stats and the Giants' place in the standings, he makes for good copy, a YouTube reel at the ready. If the Giants are indeed a football circus, might as well watch the guy with his head in the tiger's mouth. The reason most of us wanted the Giants to re-sign Beckham -- and why some of us still defend the move -- is because football is entertainment, and Beckham, for all his foibles and failures, is still wildly entertaining and worth the $95 million John Mara gave him, including the $65 million guaranteed.

Sure, you want your gridiron studs to become great players with monolithic focus. But Beckham was never that guy. Remember, before his lone playoff game he went for a cruise with teammates in Florida before flying to Green Bay, where he shriveled up in the frigid air of Lambeau Field. He was never the main reason the Giants won, nor is he the main reason they lose. But even if we won't admit it, he's still wildly entertaining, even when the Giants are in last place.

Or especially when they're in last place.