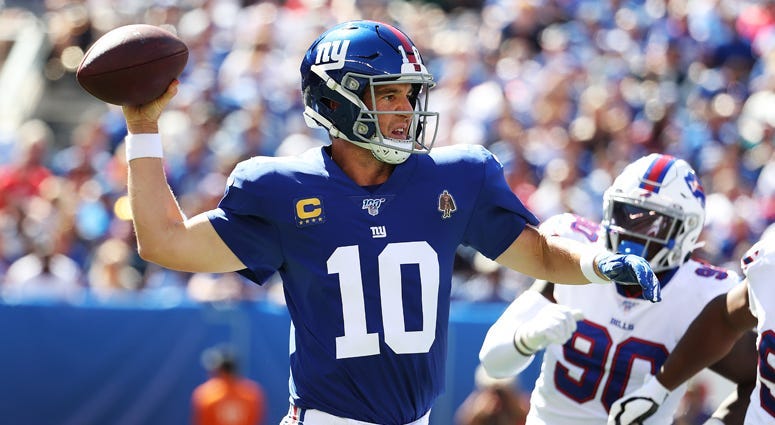 Eli Manning won't be the starting quarterback when the Giants play the Buccaneers on Sunday. Now he's relegated to the sideline, with a baseball cap, a clipboard, and a legacy. The Giants have all but retired Eli Manning as their quarterback, and will one day retire No. 10, which he has worn with such pride and purpose all these years.

Boomer & Gio wondered why the papers and the people regard this in such somber terms as if someone died. It's because we are so singularly invested in our favorite football teams, that the players who got us the glory of a Super Bowl title have become implicit members of our family. Giants fans regard Eli Manning much the way Steelers fans have regarded Ben Roethlisberger - who may also have played his last NFL game - both of whom were drafted in 2004, and led their clubs to stratospheric heights and deeds for the history books.

It's the twin-pulls of longevity and prosperity. Eli was such a mainstay on Sunday - suiting up an astonishing 210 straight starts - that we felt like we grew up with him, and that he had our backs on all those frostbitten nights on ornery fields, when everyone counted out the Giants, only to have Eli squirm out of another impossible grip and chuck a ball to an open receiver.

When you reach Eli's level, it's not so much about yards or percentages or touchdowns or any fine-print nuance. It's about a man-as-monolith, someone who took an impossible beating, a meteor shower worth of hits, and kept getting up. It's about someone who didn't look like a comic book hero but played like one in the biggest moments. We've known Eli for so long we feel we can mimic his every move. The baffled expression after a failed play or a picked-off pass. The way he jerks one shoulder to get his pads aligned. His muted disgust when a great play goes bust, a quick slap of his thigh pads, a head-down stroll back to the sideline. His aw-shucks modesty when things go well. His refreshing aversion to blaming anyone but himself.

Cynics assert that Eli's career was little more than two hot runs through a frigid playoff race, eight wins in a career loaded with losses. These are the same people who call Tom Brady the GOAT while ignoring the QB who toppled him twice. There are at least 25 NFL teams that desperately wish they had Eli Manning's success since '04.

We always think it takes a certain, polished star to charm the Big Apple, someone out of football's central casting as if they plop off some midtown conveyer belt. Yet our stars come from the oddest dots on the map. Joe Namath was from the steamy steel mills of Western Pennsylvania. Mickey Mantle was from the dustbowl of Oklahoma. Mariano Rivera comes from a poor fishing village in Panama. Lawrence Taylor hailed from the shores of Virginia.

Like them, Eli was far from a city slicker. Though he has the Manning name and game and DNA, he was hardly born to be Big Apple royalty. Yet just like the aforementioned greats, Eli quickly charmed us with his hunger on Sunday and humility on Monday. It took only a few fine passes and a few charming pressers to gain our approval.

Many monologues and articles will sound like epitaphs. Not because Eli Manning is dead - heck, he's still a young man, who may still toss a few balls this year - but because he's been with us for so long in a sport that rarely allows for long-term romance. The average NFL career is about three years. So when Eli Manning gives us 15 years it's like a gift from football heaven, something pristine in a sport that's so savage. So if this is indeed the end of Eli's career, it's perfectly fitting that a man who's been so celebrated and denigrated finishes with an even record of 161 wins and 161 losses.

We're sad not because the Giants said that Daniel Jones is their quarterback of the future. We're sad because they finally, officially said Eli is not. Maybe we knew that two weeks ago, or even two years ago. But the dim reality of it casts a shadow over the team and the town. For the first time in 15 years, someone other than Eli Manning is the leader of the New York Giants. It signals the end of an era we didn't expect and had no right to demand. And now that it's over we feel a little old and a little cold.