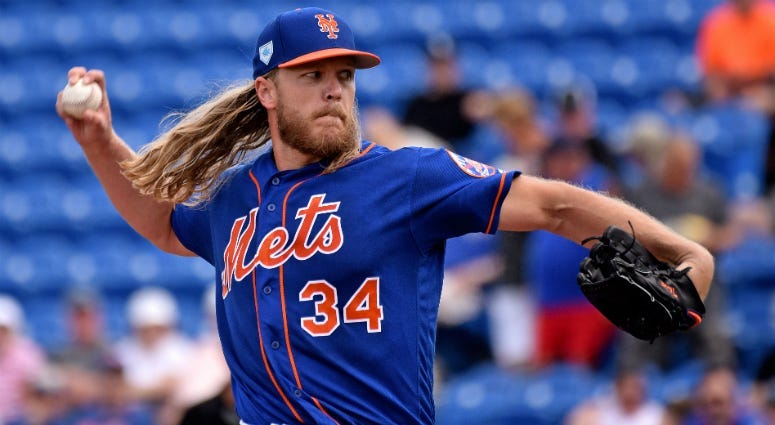 Once Matt Harvey flatlined as ace of the Mets, the club had enough arms to absorb the blow and replace the flameout with a flamethrower.

Chief among them was Noah Syndergaard. He had the hulking frame, the blonde hair bulging from his cap, and, like Harvey, he had his own comic book handle (Thor). Syndergaard not only had the stuff to lead a rotation, but also cherished his newfound status as an Asgardian.

In 2016, Syndergaard had his first stellar season. He started 30 games and posted a 2.60 ERA while fanning 218 batters in 183 2/3 innings. No one doubted his bona fides as a dominant pitcher.

Then Syndergaard was plagued by the infamous Mets injury bug, winning just one game in 2017. While it's hard for a 6-foot-6, 240 pound man to vanish, Thor did. And then Jacob deGrom happened.

DeGrom plowed through the league in 2018 as he finished with one of the best seasons in baseball history. Some may expect deGrom to rinse and repeat, but that's impossible. No doubt deGrom established himself as the ace and face of the Mets, but maybe it's the other guy's turn in 2019. And there are a few similarities between the Mets' top two pitchers beyond tall frames and fine hair.

This spring training, Thor hurled his hammer with eye-popping power and precision. MLB was so impressed they posted his highlight reel on YouTube. Ron Darling marvels at Syndergaard's 5-to-1 strikeout-to-walk ratio. Gary Cohen muses about his 93 mph change-up.

Sure, spring training means as much as we want it to, which is usually somewhere between ominous and promising. But no one doubts Syndergaard's stuff. At 26, he's entering his peak pitching years, provided those injury bats flying through the bowels of Citi Field don't draw more blood. He had a solid 2018, going 13-4, posting 155 strikeouts in 154 1/3 innings.

DeGrom and Syndergaard are the anti-Harvey. The former Mets star adored himself more than his team, disregarded team rules, and often put his personal life at least on par with his profession. You couldn't open a local paper without cringing at the latest snapshot of Harvey basking at a basketball game with some supermodel at his side. DeGrom is monastic by contrast. And other than a few harmless, third-person tweets Syndergaard is everything you want from a star pitcher.

Forgive the pun, but the Mets are a wild card this season. After a 77-85 season that was a bust beyond deGrom's historic stats, Las Vegas has the club winning 85 games. Many credible websites ranked the Mets among the five-best offseasons in the sport. Rookie GM Brodie Van Wagenen went full Pollyanna in projecting the Mets as the team to beat in the NL East. Even if he's wrong - and most pundits have the club finishing third, at best, in the division - the Mets have enough pieces to post a winning season.

So there would be some fun symmetry if Syndergaard won a Cy Young. Sandy Alderson traded his own Cy Young pitcher, the aging, knuckle-balling R.A. Dickey, to the Blue Jays for the young, strapping fireballer (and Travis d'Arnaud). With the former Mets GM leaving his job to address his health, Noah Syndergaard could tip his cap to his old boss, and indeed make this a cinematic season, with ripples from Flushing to Asgard.

Follow Jason on Twitter: @JasonKeidel
Listen to Mets games this season on the team's new flagship station -- our sister station -- WCBS 880 AM.