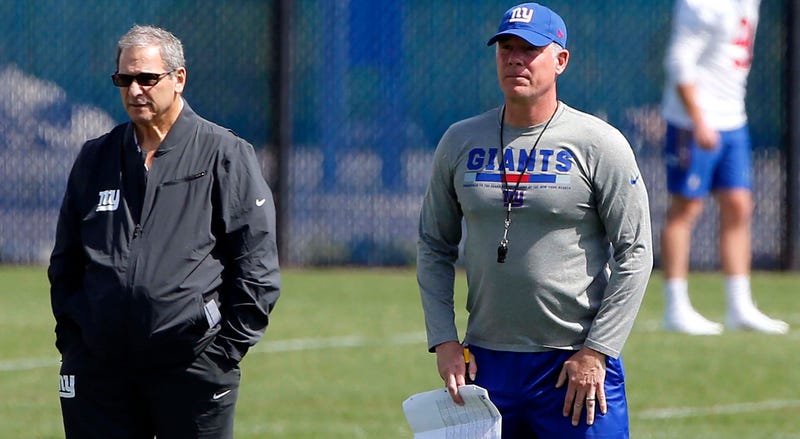 This is a big draft for Big Blue. And they have the kind of bounty that could fuel the franchise for years.

The Giants have 12 picks over seven rounds, including two in the first round, one in the second and third round, and two in the fourth round and three in the fifth. Four of those picks (No. 17, 95, 132, 142) came from the Browns, Pats (twice), and 49ers, respectively. But if you listen to the G-Men's GM, you may already be wondering, or worrying, about the direction the team is taking.

With all deference to Eli Manning, the Giants need to find his successor. Yet, Gettleman has been oddly mute over Kyler Murray and Dwayne Haskins, the top two QB prospects in the NFL Draft. Murray is about to become the only athlete in history to be drafted in the first round of the MLB and NFL drafts. He also joined Deshaun Watson as the only QBs in college football history to throw for over 4,000 yards and rush for over 1,000 yards in the same season, all while winning the Heisman Trophy.

If you listen to Boomer Esiason, as well as other former NFL players, Haskins has the build and booming arm perfectly contoured for wet and windy games at the Meadowlands. The strapping, Ohio State QB is also from New Jersey and would love nothing more than to play for his home squad.

But if the Giants aren't serious about nabbing a QB in the first round, they need to get serious about defense in general and rushing the passer in particular. Nick Bosa won't be there at No. 6, but maybe Alabama's Quinnen Williams will be. If not then perhaps Kentucky's edge rusher, Josh Allen. Some mock drafts have the Giants rolling the dice on Michigan's Rashan Gary, but he didn't do enough with the Wolverines to warrant such a high pick. So the Giants should focus on Williams - whom former NFL stud Kevin Carter said would be a Hall of Famer with the right work ethic - or Allen. If neither is available, then Houston's Ed Oliver - whom a recent CBSSports.com mock draft has Big Blue bagging at No. 6 - has bulk and speed to make any offensive lineman cower.

The same CBSSports.com mock draft has the Giants taking Duke QB Daniel Jones. There are some salient points to be made, like Jones's similar size and mien to Manning. Also, Jones played for David Cutcliffe, the QB guru who worked tirelessly with both Manning brothers. Of course, Duke has never produced a first-round QB, and the only sure thing to come out of Durham this spring is Zion Williamson.

Smarter still, the Giants could keep it all defense by drafting LSU linebacker Devin White at No. 6, then circle back and grab edge rusher Montez Sweat out of Mississippi State. No one doubts Sweat's talent or production, with 19 sacks over the last two seasons. The only concern is a recently-diagnosed heart condition, making this a medical decision as much as a football pick.

According to CBSSports NFL insider Jason La Canfora, the Giants have done substantial scouting on West Virginia QB Will Grier, whom few project as a first-round pick. So, that means the G-Men see no value in Murray or Haskins, and it means Grier is a variable to just about everyone but Gettleman. Giants fans must hope he's not just another consolation prize who wilts on the bench before he's cut. If the Giants take Grier, they better sell his merits with every breath.

Either way, the Giants have to try to get a legitimate quarterback in the fold. Fans have already accepted that Eli is yet again the starting quarterback, despite his prime years melting from memory. So they have to draft one in the first two rounds or trade for Arizona's Josh Rosen. The former UCLA QB was battered like a piñata last year, sacked 45 times in 13 starts, crouching in collapsing pockets with no time to throw. Rosen would do well to kneel at the altar of Eli and see the game through lens of a stable franchise. But so far all the Giants have done is sit on their hands and hope Eli morphs into fellow ‘04 draft mates Big Ben or Philip Rivers.

The beauty - or ignominy - of finishing 5-11 is the hybrid of high draft picks and low expectations. But the Giants built a treasure trove of draft capital for a reason. They can instantly and drastically improve their defense, and still roll the dice on a quarterback. Most of us think Big Blue should bet big on Haskins. But in the absence of common sense, the Giants can build up everywhere else, then pick Trevor Lawrence in two years, long after Dave Gettleman is gone.