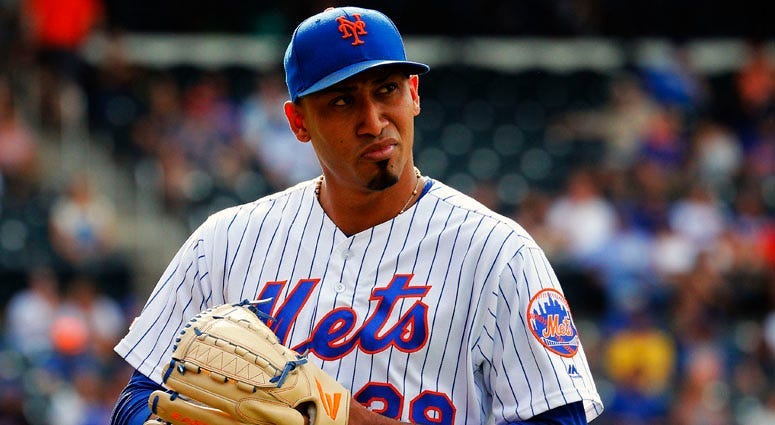 The Mets moved mountains to get closer Edwin Diaz, and he has since plunged into the volcano-deep hole. He's not a fraction of the fire-balling save machine he was in Seattle, burning his name onto a list of hurlers who lost leads, lost games, and just lost it altogether in the Big Apple.

It's not just our native narcissism that says pitching in NYC is simply different from everywhere else. Some athletes can't handle the pressure, the media, and the bouquet of microphones jammed under their chin every day.

Here are six such pitchers, who looked great in one uniform, but not a New York uniform. They are listed in chronological order and don't include Sonny Gray, because, well, we're still waiting to see whether New York was the cause of his fall, or just the start of it.

Ed Whitson, 1985 Despite posting just one good season as a starter in ten years - which happened to be 1984 - George Steinbrenner signed the former Padre to a five-year, $4.4 million contract. Whitson responded in 1985 by starting 1-6 with a 6.23 ERA. He would get slightly better as ‘85 went on, but never came close to living up to an ace's salary – and beyond the poor pitching at home, the wrath of fans, and a fight with manager Billy Martin, Whitson came back in 1986 and posted a 7.54 ERA. He somehow finished with a 15-10 record in New York, but his overall 5.38 ERA made him an unquestioned bust. Lou Piniella refused to let him pitch in the Bronx, and moved Whitson mainly to the bullpen, which accounted for 10 of his 14 appearances in ‘86. The Yanks finally, mercifully booted him back to San Diego in a trade for Tim Stoddard.

Steve Trout, 1987On July 6 and July 11, 1987, Chicago Cubs starter Steve Trout tossed consecutive shutouts, against the Padres and Dodgers, respectively. He went the full nine in both games, gave up just ten total hits, and both scores, oddly enough, ended 7-0. The twin gems lowered Trout's ERA to 3.00 and made him juicy trade bait, and the Yankees chomped on it, dealing for the Cubs starter. Whatever mojo Trout had in the Second City, he lost on his way to the biggest city. In 14 appearances in pinstripes, Trout went 0-4 and posted an ugly 6.60 ERA, and became a Big Apple punchline for years.

Hideki Irabu, 1997On July 9, 1997, the Yankees signed Irabu to a 4-year, $12.8 million contract to poach the pitcher from Japan. It was the most money ever given to a hurler who'd never tossed a pitch in the majors. He rewarded the Bombers by posting a 7.09 ERA, while allowing an astounding 2.5 homers per nine innings. Not only was Irabu saddled with being labeled the "Japanese Nolan Ryan" but he was also labeled a "fat toad" by his boss, The Boss, who was still at his surly, snarling best in the '90s. Irabu never won much, never fit in, and only finished with a winning record (29-20) because he pitched for some of the greatest teams in franchise history. Indeed, Irabu's MLB career after pinstripes saw a 5-15 record with a 6.31 ERA in 118 1/3 innings before going back to Japan. His career was sad, and even sadder was Irabu, who seemed always to be alone, took his own life in July 2011 at the age of 42. We love to lampoon pitchers, but no baseball player deserves Hideki Irabu's obit.

Jose Contreras, 2003The deal that inspired Larry Lucchino to brand the Bombers "The Evil Empire" was a four-year, $32 million contract for the Cuban pitcher with a quiver of nasty pitches. Just more proof that the Yanks could just outspend everyone on the way to the World Series. Problem is, Contreras didn't exactly match the hype in the majors. While he was impressive in his maiden season in the Bronx (7-2, 3.30 ERA) over 18 appearances and 71 innings, only half of them were starts. Then in 2004, Contreras posted a woeful 5.64 ERA in 18 starts, with a 1.41 WHIP. So after less than two seasons, the Yanks shipped him to the Chicago White Sox, where Contreras had some decent seasons, including a World Series title in 2005 and his lone All-Star season in '06. But he went just 55-56 with the White Sox, and would go 30-40 from 2007 through 2013.

Carl Pavano, 2005After posting his first fine season as a starter in 2004 - nine years into his MLB career - Pavano signed a four-year deal with the Yankees for nearly $40 million.  His 18-8 record and 3.00 ERA with the Marlins in '04 would be his only All-Star season, though, Pavano repaid the Yankees by going 9-8 with a 5.00 ERA in 2005 and quickly morphing into an injury-addled bust. His maladies included a bad shoulder, injured hip, broken ribs, and the injury that made him so loathed by Yankees fans - bruised buttocks.

Such the living embodiment of Lou Brown’s pre-heart attack speech in Major League, Pavano ended his pinstriped career with the "American Idle" sobriquet. Perhaps Pavano's greatest deeds in the big leagues came in 2003, when he tossed nine scoreless innings in the '03 World Series, making his best on field performance against the Yankees, not with them.

And this just in: simply reading this, Pavano suffered an eye strain headache and is considered day-to-day.

Edwin Diaz, 2019Of course! Diaz wasn't a Yankee like the other five, but how could we leave off the impetus for this list, even if, like Gray, we wonder if the problem is New York, or one season in Seattle being the exception and not the rule?

After yielding just five homers in 73 appearances in 2018, Diaz came to New York in 2019 and hemorrhaged 15 homers in the ninth inning alone, the most in MLB history. He nudged past Francisco Rodriguez, who surrendered 14 one year, though K-Rod pitched 20 more innings. It took no time at all for the number to jump to 16 for Diaz as a Met, when he blew a game against the Braves by belching, you guessed it, a ninth-inning home run in just his second appearance of this season. After saving his first game on Opening Day, Diaz went quickly back to imploding, and in just three appearances, Diaz has allowed five baserunners, posted a 7.71 ERA, and tossed an absurd 69 pitches in 2 1/3 innings. If the Mets don't deal or bench Diaz, he can bring the whole house down.