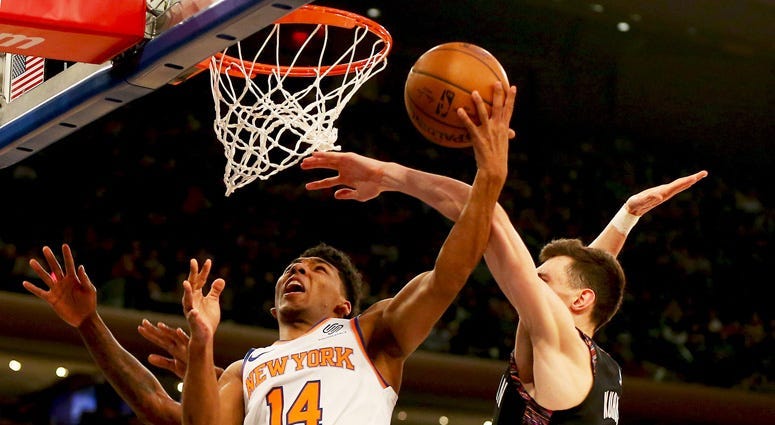 The Knicks signed Allonzo Trier to a two-year contract Thursday, converting his two-way G League contract into a guaranteed NBA deal. He’ll receive the Knicks' biannual exception, prorated for about $3.4 million this year with a 2019-20 team option worth slightly more at $3.5 million. There are a lot of levels to this transaction to unpack.

The headline should be the success of the Knicks' front office in finding Trier and getting him to sign with them as an undrafted free agent. They were able to see past his multiple PED suspensions and project that his scoring ability would translate to the NBA. Trier has said the Knicks told him he would have been their pick in the second round if Mitchell Robinson did not fall to them, so making him a priority free agent was an easy decision for the front office.

Finding NBA caliber players on the fringes like this is very difficult, and it is something the best NBA front offices, like the Spurs, have done in the past. For a team to be successful building the way the Knicks are, finding players like Trier, who outplay their draft position (or lack thereof), is essential. It is a good sign for the talent-evaluation process employed by team president Steve Mills, general manager Scott Perry and the rest of the Knicks' front office.

Due to CBA rules, the Knicks couldn’t offer Trier more than a two-year contract. They would have preferred to sign him closer to the veteran’s minimum, which would have saved the salary-cap space this summer, but Trier held the leverage. He would have been happy to become a free agent this summer and lock up a long-term deal elsewhere at the price of playing in the G League the rest of the season.

The Knicks convinced him to forego that by offering him as much money as they had available in their current cap situation. The Knicks were also able to secure a team option on the second year of the contract, rather than a player option that Trier would have been unlikely to activate. Insisting on a team option is a good signal Perry and Mills understand the importance of team control of young players.

Trier has proven to be a very efficient shooter for the Knicks at .470/.391/.816. He can finish on drives all the way to the rim and score one-on-one, earning him the nickname Iso-Zo. Despite the shooting percentages, his shot selection could use some work. Fizdale has played him at point guard, but he is a very reluctant passer (12.1 percent assist rate) despite having the ball in his hands a lot. Trier has started to slow down as teams pay more attention to him, but his future is still bright.

The bad news is that the $3.5 million the Knicks will likely pay Trier next year on that team option cut into their cap space and will bring them about $3 million below the amount necessary to afford a max player with six to nine years of experience (Kyrie Irving, Klay Thompson, Kemba Walker), even if they renounce all their other free agents and release veteran Lance Thomas. Declining Trier’s option would put them only a hair below the necessary amount needed.

To afford Kevin Durant, who qualifies for a larger maximum salary due to his longer tenure in the league, the Knicks would need another $9 million if they keep Trier, renounce all their other free agents and release Lance Thomas. Even with these numbers, it is a far better idea to lock up a player like Trier, especially since the team has the ability to find the needed money elsewhere if they can lure a max free agent to come to the Garden.

Courtney Lee remains the answer. If the Knicks can find a way to trade him, they will have enough money under the salary cap to afford a max free agent of any kind. The same can be said for a Tim Hardaway Jr. trade, but he will be much harder to move because of the two years and more than $36 million left on his contract beyond this season. Lee only has one year left on his deal after this season worth $12 million.

Lee is a candidate to be moved at the trade deadline, but the Knicks can also wait until the summer and try to trade him into someone’s available cap space (a lot of teams have room this summer, and there aren’t enough players to pay) by using an asset of some kind as a sweetener. If no free agents who fit the Knicks' preferences want to come to the Knicks, they can just let Courtney Lee play out his deal and use him as an expiring contract in a potential trade next season.

The Knicks had to release guard Ron Baker and eat the remaining money ($4.5 million annual salary) left on his contract to make room for Trier. Baker was a good defender, but he lacked the other necessary skills to be a long-term productive NBA player. The Knicks overpaid for him to return last summer. Forward/center Luke Kornet was the other obvious option to be released, but the Knicks have more depth in the backcourt than frontcourt as currently constructed.

A signing like this in the big picture is a minor move, but it signals the front office might know what it is doing when it comes to unearthing talent and structuring contracts. Those are things Mills and Perry are going to have to be good at if they want to dig themselves out of the hole the franchise has been in for the past 18 seasons.

You can follow John on Twitter at @Schmeelk and you can listen to my new Knicks podcast "The Bank Shot," which can be found on Radio.com, iTunes and other platforms.