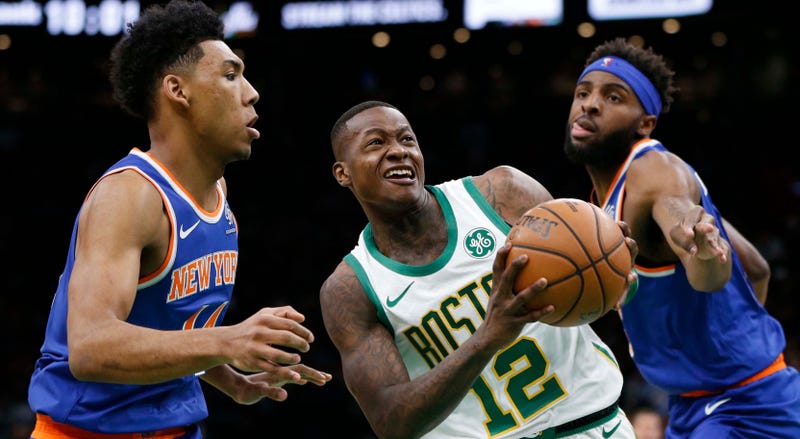 In a season destined for a lot of losses, player development was always was the most important goal for the Knicks this year. We discussed Frank Ntilikina and his future last week, so now it’s time to look at the Knicks rookie class.

Overview: Knox’s rookie year, overall, has been a bust. Knox has the worst net rating (-13.1) of any player on the roster that has played 20 or more games. He might only be 19 years old, but that does not excuse him having the lowest RPM (Real Plus-Minus) of all 513 players in the NBA. It’s an all-encompassing number that is not absolute, but it does accurately display the struggles Knox has had this season.

The Good: Knox showed that he was exactly the same player that he was at Kentucky. His strengths as a Wildcat were as a spot-up shooter and finisher in transition, which were his only relatively consistent positives as a rookie. He also flashed a nice floater, but in an ideal situation 6’9 power forwards should not have to resort to floaters to finish in the paint. They are generally used by guards who aren’t big or strong enough to finish over and through people. Knox also finished his season strong. In his last 15 games he averaged 15 points per game, and shot .419/.397/.654.

The Bad: Even in Knox’s strong final fifteen games he still only averaged 1.6 assists per game against 1.7 turnovers and just 4.3 rebounds, which are all close to his season-long averages. He also had an abominable -15.5 net rating when on the floor in his last 15 games, which was actually worse than his season rating of -13.6. There’s a fair question as to whether his March and April performance was  an aberration and mostly a product of unsustainably hot shooting, or a true step in the right direction. Only time will tell.

Knox struggled with the same things in his rookie year that he did in his lone season at Kentucky. His defense was as bad as anyone’s in the league and he doesn’t rebound well. He was bullied by bigger players and couldn’t stay in front of quicker ones. He had no idea what to do as a help defender. His 6% assist percentage is embarrassingly small and shows his inability to be a playmaker. While he can finish with momentum on straight line drives in either transition or when attacking closeouts, he struggled creating shots for himself off the dribble in one on one half court situations.

Outlook: Knox’s best chance moving forward is playing power forward where his agility gives him more of an advantage against slower defenders. But in order to make that switch, he has to become a much better rebounder. He might not ever become more than a player that can hit spot up jumpers and convert straight line drives, but that’s fine if he becomes a league average defender and passer. Those skills have to improve if he wants to be a helpful player on a good team. It’s difficult, but not impossible to improve in those areas, which are largely instinctual. He might also be helped next year by taking on a smaller workload and less responsibility. His 28.7 minutes per game might have been too much for a 19-year-old rookie. If the Knicks try to trade for Anthony Davis, Knox will likely be involved, and he should not stop any deal.

Overview: The Knicks’ second-round pick played more like a top-ten pick in a wildly successful first season as a Knick.

The Good: Robinson showed tangible progress throughout the year as he gained experience through playing time. His defensive rebounding percentage went from 12.4% before the All-Star Game to 17.1% afterwards. His free throw percentage has jumped from 51.5% before the All-Star Break to 67.7% afterwards. He jumped from 2.1 blocks per game to 3.1 and from 6.1 points to 9.5. He is an ascending talent that might already be the best shot blocker in the NBA. He not only protects the rim, but has blocked more three-point shots than any other player in the league. He has blocked at least two shots in 28 straight games. He also has the best net rating of the team’s regular rotation players (-5.7) and the best defensive rating (108.4). He is also a potential switchable defender in the future.

The Bad: It’s really hard to complain about anything Robinson has done this year. He hasn’t shown an offensive game outside of dunking, though he is practicing a three-point shot. He can finish softly off glass near the basket if he can’t dunk it. He still tends to foul a bit too much and can be a little undisciplined going for shot fakes. His hands were an issue early in the year, but they improved in the last few months. He never really has to pass since all he does is catch passes at the basket for dunks.

Outlook: If Robinson was traded today he would be a rotational player on every single team in the NBA playoffs and play an important role. He has unbelievable defensive instincts and effort, which gives him elite potential on that end. If he ever develops into more than dunker offensively, look out. Given he has only played one year of organized basketball above the high school level, the chances of further growth are high.

Overview: Another excellent find by the front office, Trier had a good rookie season and showed he can be a strong shot creator in the NBA.

The Good: Trier can flat out score the basketball, finishing the year averaging 10.9 points per game on .448/.394/.803 shooting. In just 22.8 minutes per game, he got to the line 3.5 times per game and finished the year with a 56.4 true shooting percentage. Before his calf injury that prematurely ended his season, Trier even became adept at finding Mitchell Robinson with lob passes.

The Bad: Despite handling the ball an awful lot, Trier had only a 13.1 assist percentage and averaged nearly the same amount of turnovers as assists. He gets most of his shots in isolation situations, which bogs down the offense and is not conducive to good team basketball. It’s fair to wonder whether he can help a good team win games given the style he plays. His defense has also been poor throughout the season.

Outlook: Trier’s future niche is obvious: spark scorer off the bench. The question is whether he can improve the other parts of his game enough to get him on the court. The Knicks have the option as to whether they want to bring Trier back and likely will unless they need his salary cap space to sign two superstars this offseason.

You can follow me on Twitter at twitter.com/Schmeelk for everything Knicks, Giants and the world of sports. You can also check out my Knicks podcast, The Bank Shot, which you can subscribe to on iTunes here: https://t.co/kmPo2AXb9x and all the most popular podcast platforms. You can also listen to the latest episode with Jonathan Wasserman, the lead NBA Draft Analyst for Bleacher Report on wfan.com here: https://t.co/kIN60hjexC.