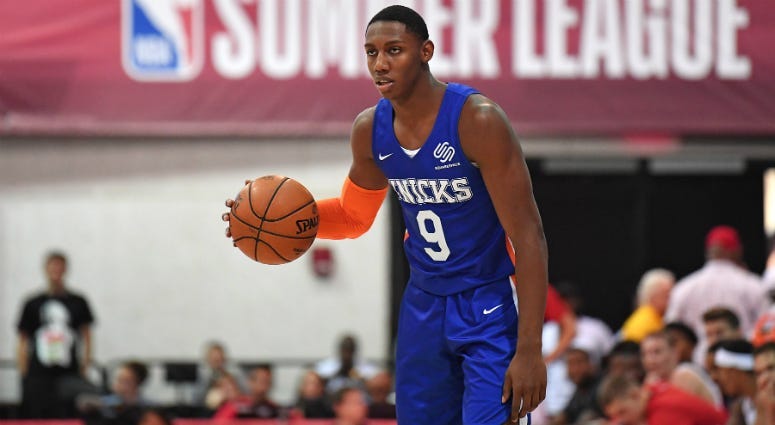 The Knicks summer league is in the books and there was certainly a lot to digest. Here were the major takeaways from the Knicks’ youngsters in Vegas.

After a disastrous first two games at summer league (18 pts, 7-33 FG, 10 TOs, 2 assists), Barrett settled in nicely in his final three games. He finished the summer with an impressive performance on Saturday; 21 points, 10 assists and eight rebounds on 7-13 from the field.

No one should have expected Barrett to turn into an efficient scorer overnight. It was an issue at Duke and it will be an issue at the NBA level until he refines his jump shot to the point where it is a consistent weapon for him. It is going to take some time and fans are going to have to be patient. It is going to be the swing skill that determines how good of an NBA player he is going to be.

Barrett’s most encouraging improvement was his passing ability, which was a skill he flashed at Duke, but didn’t use consistently enough. Barrett made good reads out of the pick-and-roll playing as the team’s primary ball-handler. He found open teammates and seemed to quickly establish chemistry with Mitchell Robinson on lobs to the basket.

His lack of elite athleticism was apparent as he struggled to consistently get separation from defenders, but in his final few games he was able to get where he needed to on the court, and used his strength, footwork (long strides, change of speed, eurosteps) to get to the basket and draw fouls. His defense improved throughout the summer as well.

Barrett wasn’t dominant by any means, but his improvement throughout the week will make fans feel more optimistic about what he’ll be able to do in his rookie season.

As a second-year player, it would have been nice to see Knox dominate summer league, but that didn’t happen. He did show progress in specific areas that should encourage Knicks fans he might be a better player in his second season.

It looked like Knox sped up the release on his jump shot, which looked smoother. He still only shot 40% from the field and struggled a little from the free throw line, but the jumper looks like it will be improved. Knox also was able to get high-quality shots off at the rim, doing a better job of jumping off one foot, finishing, and getting to the line instead of settling for toughly contested floaters.

Knox also showed better passing vision and decision making than he had showed as a rookie. He had a couple of good drop-offs for Mitchell Robinson on drives and made some nice reads out of the post to find open three-point shooters.

Defensively, Knox still had issues, and despite adding muscle in the offseason, he averaged only 5.6 rebounds per game over 29 minutes per game. There were also a couple of games where his shot selection was dicey, which ultimately lead to him only shooting 40% from the field.

Knox is going to have to earn playing time this year with the roster full of veterans with a lot of NBA experience. He will have to continue to improve to play major minutes consistently.

It looks like Scott Perry might have found another gem in the second round with Michigan forward Iggy Brazdeikis. He showed he can shoot, dribble and pass well in summer league. He has a bit of a slow-motion game but uses his strength and an array of subtle moves, fakes and changes of pace to get his shots off and to navigate the floor. He looks like he can be a rotation player rather quickly in the NBA.

He is not the most athletic player, and it might prove difficult for him to guard quicker wings. Much like Kevin Knox, his most ideal position moving forward might be as a small-ball power forward with a varied offensive game. Like Knox, he will have to beat out a lot of veterans on the Knicks roster to earn playing time this season.

Robinson did what he does well. He rebounded, blocked shots and was an efficient terror as a rim runner off of high screen-and-rolls. He was a bit too overzealous on some of his block chasing and committed too many fouls in a few games, but Robinson could be poised for a season where he could make an All-Defense team.

Despite working on it in the offseason, Robinson was never given the opportunity to show off his jump shot. If he can extend his range a little, it will provide a little more flexibility to the Knicks offense.

Allen’s defense was very strong, but he wasn’t very impactful as the starting point guard for the team. He didn’t do very well creating shots for himself or others through the league. He is on a two-way contract for the Knicks this year.

Trier played in one game and scored 21 points on 8-14 shooting. He sat out the rest of summer league.

Aside from the players already on the Knicks roster, it was Wooten that impressed me the most. He has a limited offensive game, but his jumping ability and shot-blocking instincts were apparent throughout summer league. He is only 6-foot-9 but thrived as a rim protector. Expect to see him in Westchester this year.

Cavanaugh averaged a double-double during the summer and showed the athletic ability to get to the hoop, and he showed the touch to hit the open three. He has since signed in Germany.

You can follow John on Twitter (@Schmeelk) for coverage of the Knicks, Giants and all of New York sports. Check out The Bank Shot, his Knicks podcast. The most recent episode is John's chat with Marc Berman of the New York Post. Subscribe on Apple Podcasts here.