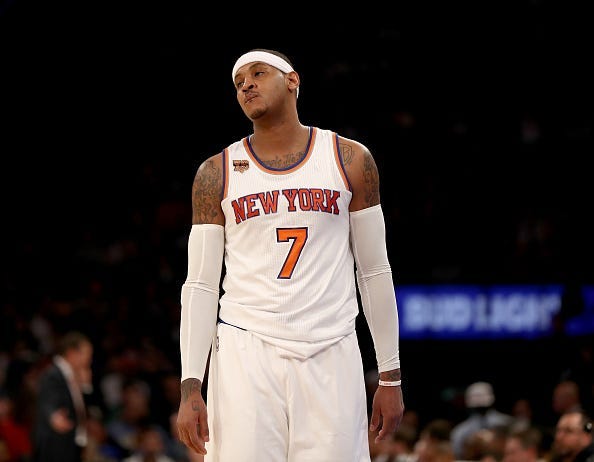 There has been this awful idea quietly slithering around the dark underbelly of Knicks Twitter the last couple of months that the Knicks should bring back Carmelo Anthony on some sort of celebratory retirement tour for the 2019-2020 season. The most shocking part of all this is that there is actually a segment of Knicks fans that think this is a good idea!

It is, in fact, a horrible idea. There’s nothing good about it from a basketball or a public relations standpoint. The primary immediate goal of the Knicks in 2019 is to appear like an organization that is well run, has a firm direction, is drama-free and not interested in some of the public relations stunts they have pursued in the past that have little to do with basketball. Adding Anthony to a roster like the one the Knicks have now would violate nearly all of those tenets.

Fortunately, there are no indications that Knicks President Steve Mills and General Manager Scott Perry have any interest in making Anthony part of their future plans. Anthony being a part of unofficial Knicks workouts means next to nothing, despite what the hot-take horde and a segment of wistful fans might try to convince the world it represents. Players get together for pick-up games all the time in the offseason in an unofficial capacity.

Carmelo Anthony, as a helpful basketball player, is no more. Even if he finds his way to a team this offseason, he has very little left in the tank to be an effective NBA player. Can he still shoot? Sure. Can you dump it to him in the mid-post where he can hit some contested mid-range shots? Sure. Can he do much else? Probably not.

Anthony can’t move anymore. He doesn’t have any side-to-side quickness or burst left in his legs. Even in his final two seasons with the Knicks all the way back in 2016 and 2017, the drop-off had begun. In those two seasons, Anthony averaged only 5.6 and 4.9 free throws per game (a drop from 7-8 during his prime years). It is a sure sign of being unable to use quickness to get to the rim and explosiveness to rise and draw fouls.

Anthony was still able to use his strength to bully his way inside, but with his style making it obvious he was the one initiating contact with his lead shoulder, he no longer got the benefit of the doubt from officials. He was rarely able to dunk the basketball anymore. Age finds everyone eventually.

According to Basketball Reference, Anthony shot just 54% and 56% on shots within three feet of the hoop in his final two seasons with the Knicks. He couldn’t finish at the rim anymore. Only 12.7% of his shots came within three feet of the rim in his final Knicks season. He couldn’t get to the rim anymore. The physical toll playing so many games in the NBA at a high level deteriorated his athleticism and limited him to a mid-post player and jump shooter.

Always a suspect defender, Anthony’s defense became apocalyptic. His lack of foot speed made it impossible to stay in front of quicker offensive players. Despite those obvious limitations, there seemed to be resistance (according to some reports) to become a full-time power forward where his new athletic profile would limit the negative impact of his physical limitations.

Recently, Anthony has publicly come out and said he would be willing to take any role to play in the NBA, but his complaints about his role with the Rockets last year (specifically about their communication to him about that role) are likely making NBA front offices suspect he would be a distraction if he was limited to only 15 minutes a game in a back-up role. A player with his remaining skill set is not worth that type of headache.

This is the first true year of the Knicks’ building process, with last year being used primarily to erase the vestiges of Phil Jackson’s vision for the franchise. Even without Anthony, Fizdale is going to find it very difficult to find minutes for the 13 - maybe 15 - that fully expect to be part of the rotation.

Having Anthony in a locker room like that, taking minutes from younger players that came to the Knicks so they could have larger roles to take the next step in their careers is counterproductive at best, self-sabotaging at worst.

The Knicks' future is in the hands of these players and whether or not the Knicks can continue to develop them. Benching them for a player on his final ride into the sunset makes little sense. This is especially the case when Anthony’s diminishing skill set makes his impact on winning basketball games dubious.

The Knicks are trying to prove to the league and future free agents that their method of player development and team building works. Sure, Anthony might get them a few more segments on national TV that will likely degenerate into “LOLZ KNICKS” guffawing from pundits, but the team should be trying to avoid that.

Fans also need to let go of the past. Anthony might give them some good feelings from the last time the Knicks won fifty games and made the playoffs, but he isn’t that player anymore. He played hard and well for the Knicks for years, and helped the franchise win games, but he is not capable of being that person anymore. The Carmelo Anthony era is over and fans need to let go of it.

The Knicks need to quietly go about their business by playing low-key, fundamentally sound basketball with their young players. They need to win more games than people expect. Getting above 30 would be a nice start. Carmelo Anthony doesn’t help either of those things. The Knicks should stay away.