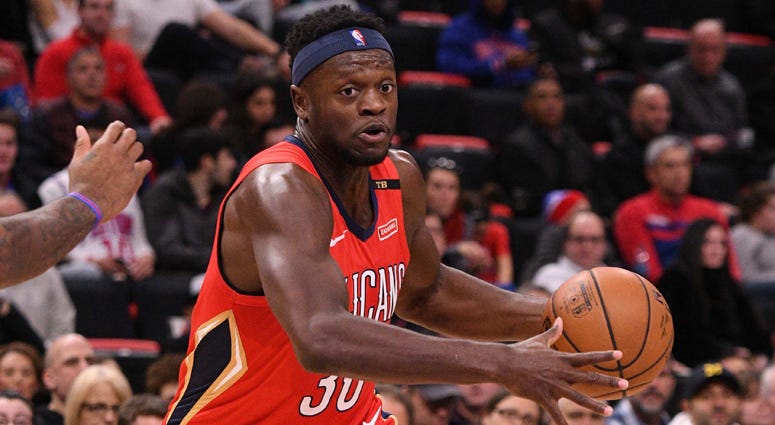 The Knicks failed to sign the top free agents this offseason, but they did manage to bring in one big fish: Julius Randle.

Before everyone starts rolling their eyes in regard to calling Randle a big fish, there’s a real chance he will be playing in the United Center on February 16th as an NBA All-Star.

Amidst the controversy and chaos of Anthony Davis’ trade demand last season, Randle quietly put together a season that established himself as one of the better offensive power forwards in the NBA. According to Basketball Reference, Randle is only one of seven NBA players last season to score 20 or more points with a True-Shooting percentage of 60% or higher.

Who are the others? It is a pretty impressive list: Stephen Curry, James Harden, Kevin Durant, Kawhi Leonard, Giannis Antetokounmpo, and Karl-Anthony Towns.

No one should be placing Randle in the same stratosphere as those players, who are considered current or future perennial All-NBA performers. There is more to basketball than scoring efficiently, but it is probably the most important part of the game that transforms players into stars.

Randle’s improvement has come naturally, indicating that last year’s numbers are not an aberration. Despite jumping from 11 to 15 shots (and 16 to 21 points) per game in his last two seasons, Randle’s efficiency numbers have remained static. He has shot 1.5 more free throws per game in each of his last two seasons when compared to the prior year.

For the first time in 2018-2019, the three-point shot became a bigger part of his repertoire, averaging 2.7 attempts per game and making 34% of them. Combined with his 6.7 free throws per game (and his 73% from the free-throw line), Randle’s shot profile is becoming more and more favorable.

Last season, of Randle’s 14.9 field goal attempts per game, more than half (7.7) came in the restricted area, of which he made 66.4%. Another 2.7 shots came from three (34%) and 3.5 coming from the paint but outside the restricted area. If you do the math, that means he only took one shot per game from mid-range (between the paint and three-point line). It should be no surprise he is such an efficient scorer, and there’s no reason it shouldn’t continue.

In terms of how Randle gets his shot, it is varied. His two most frequent plays, according to Synergy, come in the post (16% of the time) and on spot-ups (17% of the time). He is only in the 48th percentile in terms of points per possession via post-up, but he does well as a spot-up player (60th percentile). The rest of his plays are split between isolation, pick and roll dive man, put backs (he’s averaged two offensive rebounds per game over the course of his career) and cuts.

David Fizdale is going to have a lot of flexibility in deciding how he wants to use Randle and fit in with the rest of the talent on the team’s roster.

As a passer, Randle has shown he is capable, averaging between 2.6 and 3.6 assists per game in his last three seasons in just over 28 minutes per game. If the offense will truly run through him, which will invite more double teams, it will have to become more of a feature of his offensive repertoire. He will be responsible for not just scoring, but for making his teammates better.
USA TODAY Images

Of the six other stars listed above that averaged over 20 points with a true shooting of 60% or higher, Randle has the lowest usage rate at 27.8 percent. If that goes up with the Knicks, along with his minutes per game, he could bump over 24 points per game, and closer to ten rebounds per game. Those numbers scream All-Star.

Unfortunately for Randle, when compared to those other six players he is also far behind all of them in many intangible numbers that indicate how much a player helps their team win. Every one of those other six players has win shares per 48 minutes between .197 and .292. Julius Randle sits at .131. He also has the smallest net rating of the group, with the Pelicans only outscoring opponents by one point when he was on the floor. Every other player in the group is at least +10 in net rating.

It has a lot to do with defensive impact. Randle’s Defensive Rating of 112 is the highest of that group of players. His 1.9 defensive win shares are the lowest of the group, including Stephen Curry and James Harden. His -.4 defensive real plus/minus is worst of the group except for Curry, who is at -1.4. His 1.9 VORP (value above replacement) is also the lowest of that group, which is precisely why he is not considered in that echelon.

Advanced metrics are not everything, and a lot of those lower numbers have to do with Randle playing with less talent in New Orleans than the other stars on the list. He was also unable to elevate the teams he was on, especially defensively, to win games. For the Knicks, he will have the chance to be a team’s number one option for the first time, and how he handles it will reflect on how he is viewed as a player by the rest of the league.

Randle will have the numbers to be in the conversation to be an All-Star this year, but the question he needs to answer is whether those numbers and the other aspects of his game will impact winning games in a meaningful way. They haven’t so far in his career, but he is young and that can change. The Knicks will need it to start now if they want to be closer to a playoff spot than the top of the draft lottery.